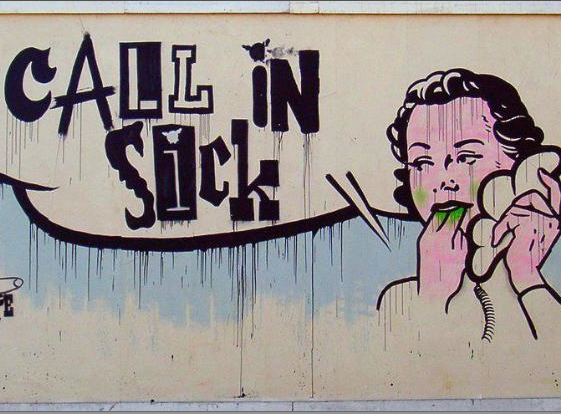 One in three UK workers admit to calling in sick for dishonest reasons such as going to an interview, watching sport, and hating Mondays, according to new research. (Eddie Dangerous/Flexioffices)
Health News

Sick days cost the economy over £23 billion a year, with one third of employees admitting they have “pulled a sickie”, often going to great lengths to cover up their deceit, according to new research.

The UK-wide survey asked 2,000 workers to confess their excuses for calling in sick. From wanting to enjoy the sun, through to faking a cold in order to watch a major sporting event, one-third of Britons have lied to get unauthorised time off from work.

Attending a job interview was the most popular reason for a day off for people in the Southwest UK, and for one in three respondents in the survey, conducted by Flexioffices, an office space provider.

One quarter of people said they had exaggerated sickness due to a hangover.

Eleven per cent of people surveyed, particularly 18-24-year-olds from the Northeast, have pulled a sickie to watch a major sporting event.

West Midlands people gave wanting to sunbathe on sunny days as the fourth most popular reason for lying to the boss.

Mondays are the next excuse for a sickie, being especially unpopular among 18–24-year-olds in the East of England.

An earlier survey this year by ITV showed that the first Monday of February emerged as “national sickie day”, with workers unable to face mounting credit card debts, the long wait until the next holiday, and wintry weather.

Other reasons for not coming to work included relationship breakdowns at work, affecting 25-34-year-olds and the over 65s; preparing for a big date; having a bad haircut, particularly for young workers; and shopping in the last day of the sales – irresistible to mainly East Midlands women.

The tenth most common reason for skiving off work was having a huge spot on the face.

Recent research on dishonest sick days by PricewaterhouseCoopers (PwC) found eye-opening excuses including: I was attacked by ants; my dog has eaten my keys; and I got a rash from eating too many strawberries. A male employee even told his boss that he had started the menopause.

UK workers take nearly triple the number of sick days as workers in the Asia Pacific (2.8 days) and nearly double those in the United States (3.8 days).

PwC’s research showed that people lying or exaggerating to take time off work is costing UK business £9 billion a year.
David Wignall, PwC’s leader of the Human Resource Services team in the Midlands, said in a statement:

“This should be a wake-up call for businesses, especially start-ups and SMEs (small and medium enterprises), where absence can be particularly crippling.

“Our research shows that when it comes to reducing absence levels, carrot rather than stick is the best approach. Having a flexible working culture can go a long way to breaking the cycle of people feeling that they are entitled to days off outside of their holiday allowance and encouraging better employee engagement.”