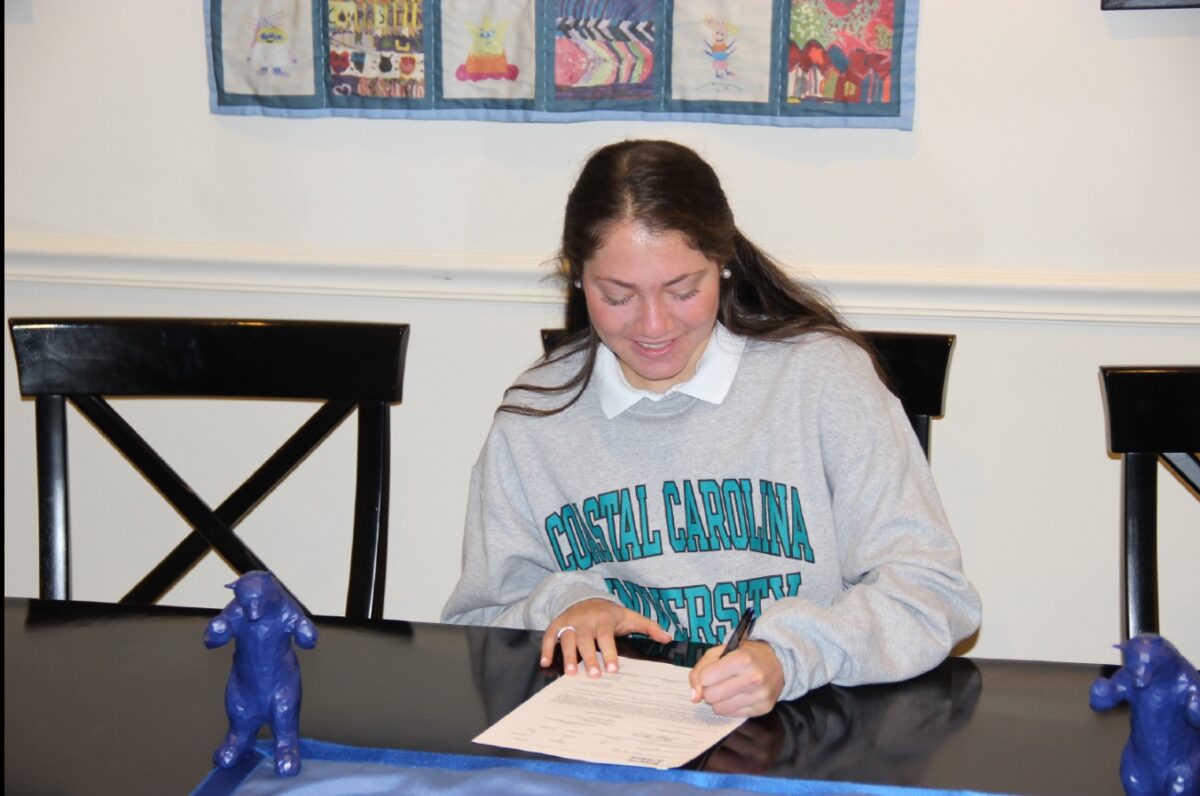 Turning a Stumbling Block Into an Advantage

Brooke Gottlieb is 21 years old and a student at Coastal Carolina University. A competitive lacrosse player for a Division I school, she’s majoring in health communication. She’s earned straight A’s every semester since her first year of college, and has been nominated for multiple writing awards.

While that may not seem remarkable, Gottlieb is also dyslexic.

Dyslexia is a learning disability that causes challenges with reading and processing language. More specifically, dyslexia is “a neurological condition caused by a different wiring of the brain,” according to the International Dyslexia Association. It is characterized by difficulties with word recognition, trouble reading, and poor spelling.

Dyslexia by the Numbers

Being Dyslexic Doesn’t Make You Dumb

Dyslexia isn’t correlated with intelligence, concluded a 2010 study published in the Journal of Psychological Science. In this study, a team of researchers from the Yale School of Medicine and the University of California Davis tested 445 students annually in reading and biannually in IQ over the span of 12 years.

The research team discovered that in children with dyslexia, IQ and reading aren’t related. They found that dyslexics can simultaneously be very smart while still battling with reading.

One of the study’s authors was Dr. Sally E. Shaywitz, M.D., a neuroscientist who specializes in dyslexia, and co-directs the Yale Center for Dyslexia & Creativity. She has “seen so many children who are struggling to read but have a high IQ,” she told Science Daily.

A 2011 NIH-funded study that involved brain imaging also found that dyslexia isn’t correlated with intelligence. For this study, a team of researchers from MIT and other institutions measured the brain activity of 131 children in Pittsburgh and San Francisco. Students in the study ranged in age from 7 to 16 years old.

The scientists then used functional magnetic resonance imaging scanners to look at the brains of the children while they engaged in an on-screen reading activity. The children had to look at pairs of words and indicate whether or not the words rhymed.

The researchers found that children with dyslexia had similar brain imaging as children with poor reading skills, even those who had high IQ scores, leading them to conclude that reading difficulties for people who are dyslexic are independent of other cognitive abilities.

“Reading difficulty,” one of the research team explained in a  statement, “is independent of other cognitive abilities.”

For someone who doesn’t have dyslexia, it’s hard to understand what it feels like. Imagine reading with the lights off. The words are somewhat visible, but it takes an extra effort to see them and process them.

You have to reread the page a few times because it is difficult to comprehend what you’re reading in the dark. This can cause frustration and make reading strenuous and unpleasant.

Those with dyslexia, the people I interviewed told me, experience this feeling of “reading in the dark” on a daily basis, even though they are reading with the lights on.

Gottlieb said one of the most difficult challenges associated with dyslexia is the amount of time it takes to complete reading or writing assignments.

When Gottlieb was in high school, she told me she would start her homework every night after lacrosse practice, around 6 p.m. While her peers typically finished their homework in one to two hours, Gottlieb was up doing work until 1 a.m. most nights.

The worst evenings were when she was tasked with reading multiple textbook chapters. It took her hours to finish a handful of pages because of her difficulty to process and comprehend the words on the page.

But, Gottlieb said, the demands accompanying dyslexia aren’t limited to the school or work environment. Dyslexia can cause disruptions in other aspects of everyday life.

One of the most difficult tasks for Gottlieb involves following directions and reading maps.

During a recent drive to the dentist—on the other side of town—Gottlieb missed her exit on the highway despite having the GPS synched up to her car.

She ended up going 30 minutes in the opposite direction. Gottlieb’s sister was a passenger in the car and tried to help, but she also is dyslexic. So they both ended up missing their long-awaited dentist appointments.

Strategies to Help With Dyslexia

Starting assignments early and not procrastinating. It generally takes people with dyslexia a lot longer to finish reading or writing tasks. To alleviate the stress of completing something last minute, you must plan ahead and give yourself extra time.

Taking advantage of technology. There are several online services available that make living with dyslexia easier. Search “assistive technology to help with dyslexia” and you’ll find multiple options. Some that are particularly helpful include:

NaturalReader: A free text-to-speech program. Upload PDF or Word documents to the program and choose which voice you prefer. NaturalReader will read any document you upload. All you have to do is listen.

Speech-to-Text Programs: Typing long essays can be strenuous for many dyslexics. Both Microsoft Word and Google Docs have free “speech-to-text” options, as do both the Apple and Microsoft operating systems. Depending on the program or operating system, all you have to do is enable the use of the microphone on your computer and click “voice typing.” As long as you speak clearly, your speech will be dictated. This can help save a lot of time.

Bookshare: Audiobooks speed up and aid with reading comprehension for many with dyslexia. Bookshare is a service that provides access to free audiobooks. You can also get free audiobooks via your local public library. Try downloading Libby, a free app that lets you borrow audiobooks and eBooks from many libraries.

If You Think You or Your Child Is Dyslexic, What Should You Do?

Although dyslexia is considered a learning “disability,” it really should be known as a “learning difference and advantage.”

Thinking Outside the Box Is a Gift

Here’s what you rarely hear about children and adults who are dyslexic: Dyslexics have the ability to think outside the box of the typical learner and see the world in a unique way. Those with dyslexia adapt by leaning into their strengths. They are known to be highly creative, imaginative, observant, and persistent.

Jordan Pease, an entrepreneur and philanthropist based in southern Oregon, isn’t sure if he was born with dyslexia or if it’s related to a head injury he had from a bike accident when he was 6.

“I’m in my early 50s now, and it was probably well into my high school years that I finally started to realize that there was some kind of disorder that caused me to feel like I was handicapped in certain, narrowly specific areas,” he said. “I don’t have a way to gauge it, but I’d characterize my dyslexia as ‘moderate’ compared to other people that I’ve encountered or read about with the condition.”

Growing up, Pease had difficulties spelling, often transposed numbers, and sometimes even had trouble just dialing the phone, challenges that continue to this day. Writing on lined yellow paper in school was especially hard for him because he couldn’t distinguish the letters from the lines.

These days, he notices that he has trouble driving in the late afternoon when there are long shadows: the contrasting light and dark areas on the road are difficult for him.

“It’s like a motor revving up under a load,” Pease said. “My brain really gets taxed with tasks that are very simple for most folks.”

Given his challenges with alphabetizing and numerical ordering, the last thing you would expect is that he would open a library. But, about 20 years ago, that’s just what he decided to do. He felt strongly called to found a library for people interested in alternative information about life on other planets, health, economics, and more. His motivation was to provide people easy access to information that inspires, heals, and transforms.

The Rogue Valley Metaphysical Library in Ashland, Oregon, has been thriving under Pease’s leadership ever since.

As for Gottlieb, she used to feel frustrated by her dyslexia, but now she says she’s embracing it as advantageous. Her plan is to become a writer.

“My biggest stumbling block when it comes to meeting my writing goals is that I am dyslexic,” she wrote recently. “Growing up, I saw this as a disadvantage because it always took me way longer than my peers to finish my work. It used to take me hours to complete one page of writing. Others who know that I am dyslexic often assume that I am incapable of producing advanced writing prior to even reading my work.

“However, when I came to college it was my goal to turn this stumbling block into my advantage. I believe that being dyslexic allows me to see the world through a different lens than most people. I rely on my auditory abilities and talk out loud as I write. I have been able to conquer my dyslexia by relying on my strengths. I am now a much faster writer compared to when I was in high school and find that writing flows easier for me than it ever has before.

“As a junior in college, I have been able to maintain a 4.0 GPA every single semester since my freshman year and have been nominated for multiple writing awards by my professors. Although it still is not easy, I am proud that I have been able to turn my stumbling block into my advantage.”

Jennifer Margulis, Ph.D., is an award-winning journalist and author of “Your Baby, Your Way: Taking Charge of Your Pregnancy, Childbirth, and Parenting Decisions for a Happier, Healthier Family.” A Fulbright awardee and mother of four, she has worked on a child survival campaign in West Africa, advocated for an end to child slavery in Pakistan on prime-time TV in Paris, and taught post-colonial literature to non-traditional students in inner-city Atlanta. Learn more about her at JenniferMargulis.net