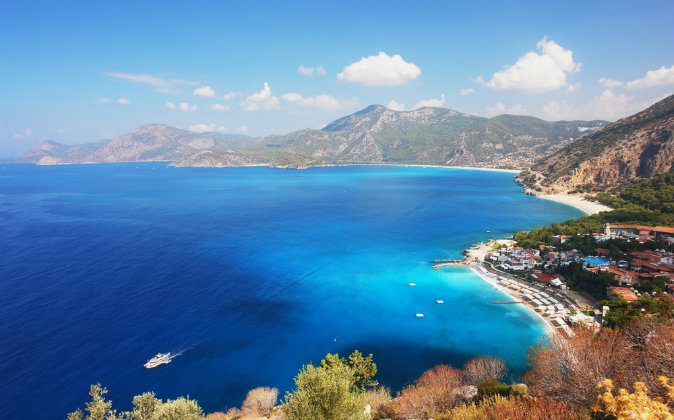 Izmir and the Aegean Coast

There are several great reasons to base yourself in the ancient city and port of Izmir. Its close proximity to the airport makes it accessible and convenient for a short triste, and its location close to historical sights and several beach resorts along the Aegean adds more options.

The city unfolds around a huge bay pleated by several rivers and streams and stretches out into a major metropolis hemmed by mountains. Though it has an ancient heritage, there is a European essence in its broad boulevards, contemporary buildings and shopping centres. But this is tempered by old mosques such as the 16th century Hisar Mosque and churches, and the well preserved Roman and Greek remains at the ancient market place of Agora where you can stroll around collonades and ruins.

Turkish authenticity still looms large in the district of Kemeralt home to an an expansive, lively and very colourful 17th century bazaar specialising in antiques.

But the place to be at sunset is by Kordonboyu, the seafront promenade and its pleasant grassy area, sipping an Efes beer in a meyhane (taverna) or a European styled cafe, and enjoying the seaviews and mountains beyond.

Though the city has a shore it is not a beach resort but it is close to several towns that are, so you could enjoy a city/beach combo.

Head south to the Cesme Peninsular where the landscape transforms into fields of artichokes and aniseed, fig trees and groves that lead to golden ribbbons of sand, and countless romantic bays all lapped by the waters of the Aegean sea.

The resort of Ilica, known for its thermal springs that sometimes appear in the sea itself especially around Sifne Bay, is also a well developed holiday resort with a fabulously long white sand beach and warm vibrant blue waters.

Together with the neighbouring beach town of Alcati, whose landscape features hilly vineyards and windmills, the duo have become windsurfing favourite thanks to steady high winds that blow in from the sea.

There are three somewhat quieter beaches too at Altinkum and Pirlanda and even more so at Kaputa,s a spectacular beach reached via a gorge,where there are so few amenities that you have to take a picnic.

Copyright © 2015 by The Travel Magazine. This article was written by Sharron Livingston and originally published on thetravelmagazine.net

*Image of view of the coast in Oludeniz, Turkey via Shutterstock