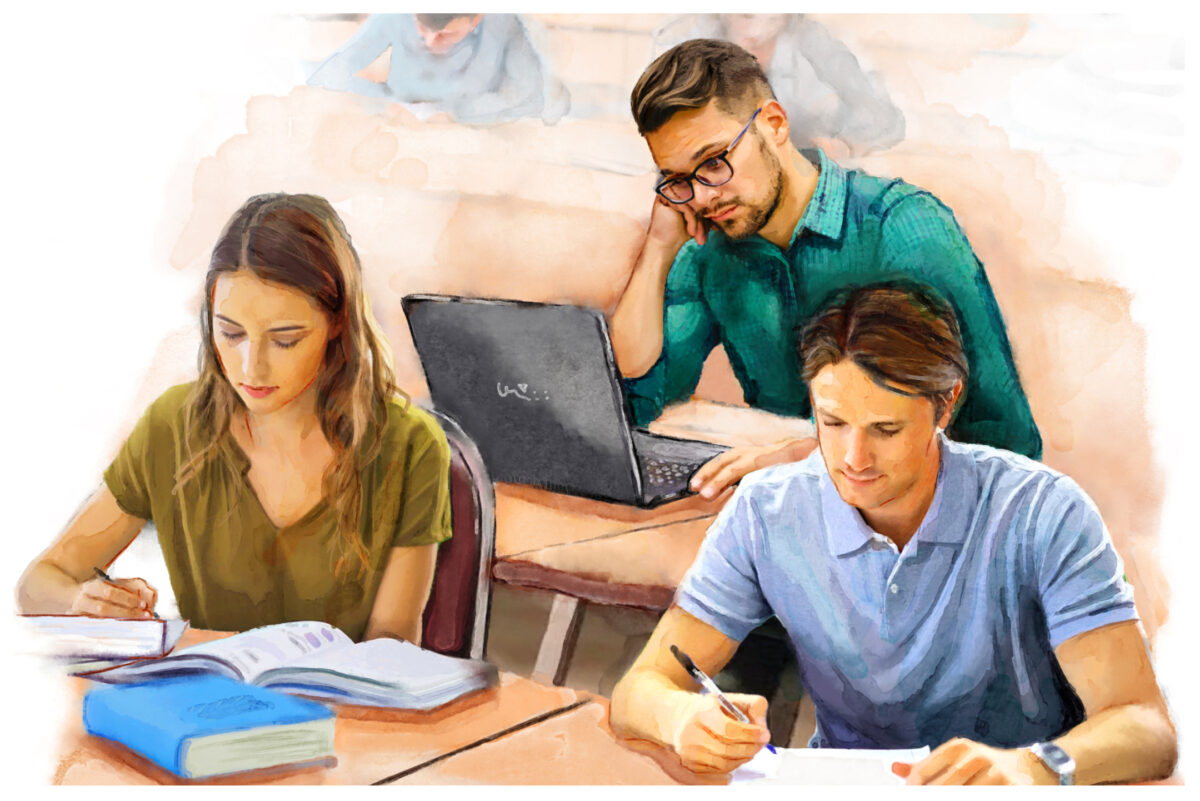 To Avoid Self-Destruction at College, Be Careful What You Pack for Class

Over 2 decades of studies have found that laptops and the college classroom make for, in most cases, a dangerous mix
BY Matthew John TIMEAugust 16, 2022 PRINT

As this sweltering summer gives way to fall, a fleet of American teens will be off to college in a few short weeks.

Alongside laundry bags, binders, dorm décor, bed sheets, that go-to shampoo, and perhaps a favorite comforter, the laptop computer is now just as much a staple as the paper planner of yesteryear.

They’re used for everything from typing up papers to accessing course assignments, doing research, posting to discussion forums, and, well, all of those other less collegiate things we do as social beings. Emailing friends, checking social media, shopping, and all that.

The problem is, the boundaries between those two worlds—the academic and the social—appear to be tragically thin when it comes to the sphere of a 12–15 inch screen.

More than two decades of findings by educational researchers suggest that most students have an exceptionally hard time keeping work, work, and fun, fun. The two spheres blend and blur imperceptibly when the laptop comes out—regardless of the occasion. And the classroom proves little exception.

More than any shiny instrument in the student’s arsenal, the laptop, it turns out, is today’s proverbial “double-edged sword”—able to dish out as much damage to its user as benefit.

But unlike the gaping flesh wound a sword might inflict, the harm done by that shiny chrome device tucked in the backpack is less obvious. Poor or compromised end-of-term grades prove far less immediate than physical injury, and the pain (if felt at all) is less connected to its source.

In a sense, the laptop might be more appropriately likened to the Trojan horse: A stealth invader that, by all appearances, seems a covetable gift. Who isn’t thrilled to head off to campus, after all, with the latest Retina Mac, specced out with the best video processing card and oodles of memory?

Turning to the research, however, we find instead a cautionary tale. The new and shiny isn’t necessarily the friend it seems.

First, it’s worth noting an attitudinal change among educational researchers, though it hasn’t really trickled down to the general public yet. There has been a gradual dawning of concern among researchers over the years, regarding laptops (or computers more generally) in the classroom, that seems well justified.

A look back at early research from the 1990s paints a rather Pollyanic picture of infinite possibilities and a seemingly endless parade of positive outcomes.

Pretty much every pedagogical plus you could think of was alleged for the emerging technology.

It was a romance that, in hindsight, might have been born more of rose-tinted glasses (who wasn’t excited about the promise of the computer revolution, after all?) or attributable to the novelty of it rather than to actual, well-sorted-out outcomes.

By the early 2000s, as computers got more mobile, studies were emerging that suggested a less rainbows-and-unicorns picture.

A 2001 paper by Geri Gay, professor of communication at Cornell University, and Michael Grace-Martin, a research associate, used a proxy internet server to record and analyze student web browsing during class. They chose two upper-level college courses and monitored the activities of 82 students. And mind you, these were college-age students—not less-mature middle or high schoolers—attending an Ivy League institution.

What the team found was completely counter to the dominant narrative: The more time during class students spent on the internet, the worse their final course grades.

While this would seem a kind of “no-duh” affirmation of common sense, one has to remember that tens of millions of dollars were then—just as with now—being pumped into new classroom technologies throughout the country, from the elementary level on up. Little skepticism of it all was being registered. It was a runaway train.

A personal tidbit is worth sharing, from another New York state campus. It was but a few years after the Cornell study that I remember a friend sharing her horror, while auditing a class at Columbia University’s law school, upon observing a large lecture class and seeing what America’s elite lawyers-to-be were doing with themselves. While their extraordinarily accomplished professor was at the podium, expounding on the intricacies of contract law, dozens of students could be seen throughout the lecture hall on their laptops, doing anything but studiously jotting lecture notes.

Some were messaging each other. Others catching up on email. Several were shopping. One was even watching a random video online. Still others were checking out the news.

If you would expect anyone in the classroom to not squander an educational opportunity, it would be them.

It was an eye-opening as well as sobering moment to hear about this.

The academic literature since then has only affirmed the startling sketch my friend painted that day. Yet few of my colleagues in the teaching profession are familiar with it. A few seminal studies present an alarming picture.

One 2010 study published in the Journal of Information Systems Education examined the extent of student multi-tasking in a lecture-based college course. This should have been a highly engaging course, mind you, as it included “substantial problem-solving activities,” according to the study’s authors.

Their finding? “Students engage in substantial multitasking behavior with their laptops and have non course-related software applications open and active about 42% of the time.”

That’s nearly half the time spent in class. “Substantial” indeed!

Significantly, the researchers used internet monitoring as well as student self-reporting of activities and, afterward, compared the two. Sure enough, students greatly under-reported their own multi-tasking activities.

We should note the implication here: Students typically underestimate the extent of their misuse of laptops. They don’t grasp the extent of the issue. There’s a disconnect between reality and their problem—something eerily similar to what happens with substance abuse.

Other studies, which in some cases have relied solely on student self-reporting, should be viewed in a skeptical light. Glowing reports of laptop multi-tasking from students are suspect, on many levels.

Another significant study came about in 2012, and was published in the journal “Computers & Education.” A collaboration by six researchers, this well-designed study pitted students with computers and internet access in class against a “paper-and-pencil” control group, which was sans laptops.

They found that “participants who did not use any technologies in the lectures outperformed students who used some form of technology”—which they attributed to what psychologists call the “bottleneck theory of attention.” In lay terms: Multi-tasking undermines your ability to focus.

So much for souped-up processors and blazing bandwidth.

Another 2012 study by Faria Sana, Tina Weston, and Nicholas J. Cepeda adds another dimension to the problem. Not only is the laptop prone to hurting one’s own academic performance, but also that of one’s nearby peers.

The team found that “participants who were in direct view of a multitasking peer scored lower on a test compared to those who were not,” and concluded that “multitasking on a laptop poses a significant distraction to both users and fellow students.”

A misused laptop doesn’t just make you a worse student. It makes you a worse citizen, too. It’s not just self-destructive, then. It’s also selfish.

But what about those exceptional Ivy students? Surely they can get away with a few naughty forays more than the rest of us, given their academic firepower?

Yet again, the research says “no.”

A tellingly titled 2014 study by Susan Ravizza and colleagues, at the University of Michigan, is relevant here: “Non-academic internet use in the classroom is negatively related to classroom learning regardless of intellectual ability” (emphasis added).

So if there’s one upside to the laptop’s downside, perhaps it’s that we are all equally prone to its destructive powers. You can’t outsmart it; you can only outsmart yourself.

A similar follow-up study by Ravizza et al in 2016 found that not only is intelligence not a mitigating factor when laptop multitasking in class, but neither is motivation or interest in course material. It seems the temptation to surf and message and step out of bounds trumps our best intentions.

And to quite an extent, apparently.

The Michigan team found that students wasted, on average, nearly 40 minutes out of every 100-minute class period doing nonacademic things online—including, as at Columbia, checking email, shopping, reading the news, chatting,  and playing games. (And let it be said that UMich students aren’t exactly underachievers, either!)

This means that it’s not enough just to be motivated, interested, or even super smart. The laptop’s potential for corruption overpowers its promise. And we’re all in this equally together.

It’s a humbling thing to realize. But important.

What about taking proactive countermeasures, then? Can one beat back the devil with stealth strategies, like, say, planting oneself in the first row, as up-front and center as possible?

A clever 2020 study by Walter F. Bischof and Alan Kingstone found that “using a computer had the same harmful effect on grade performance regardless of whether the student sat at the front or back of the classroom.”

(Though, front-row sitters take note: Sitting closer to the front is correlated with higher achievement, normally—translating to 0.75 percentage points per row! However, that benefit is quickly erased by your laptop—which, on average, costs a student 3.88 total percentage points.)

While some studies have found some positives associated with laptop usage, they’ve tended to be few and far between. They also seem to agree that it’s hard, if not impossible, to identify which few, select students are the ones who benefit.

Even studies that have found purported benefits—such as using the internet for class-related activities—have, in some well-conducted evaluations like Ravizza’s, been found to be unfounded. Laptop usage for in-class activities “was not associated with a benefit to classroom performance,” in her team’s own words.

Increasingly, it seems the evidence is piling up against the laptop, at least in the college classroom.

And as described previously here, even if a student were to exercise absolute self-control (say, turning off one’s own Wi-Fi at the start of class) and just use the laptop for notetaking, he or she is probably missing out. The benefits of paper-and-pen go beyond avoiding internet distractions to deeper learning and long-term memory formation.

All in all, the benefits (which seem increasingly slim, if any) seem far outweighed by the cons.

A good ol’ fashioned spiral notebook might not be as flashy as the latest laptop, but it’s far more likely to spell success in the classroom.

And by golly, it’s a lot less hefty to lug around.