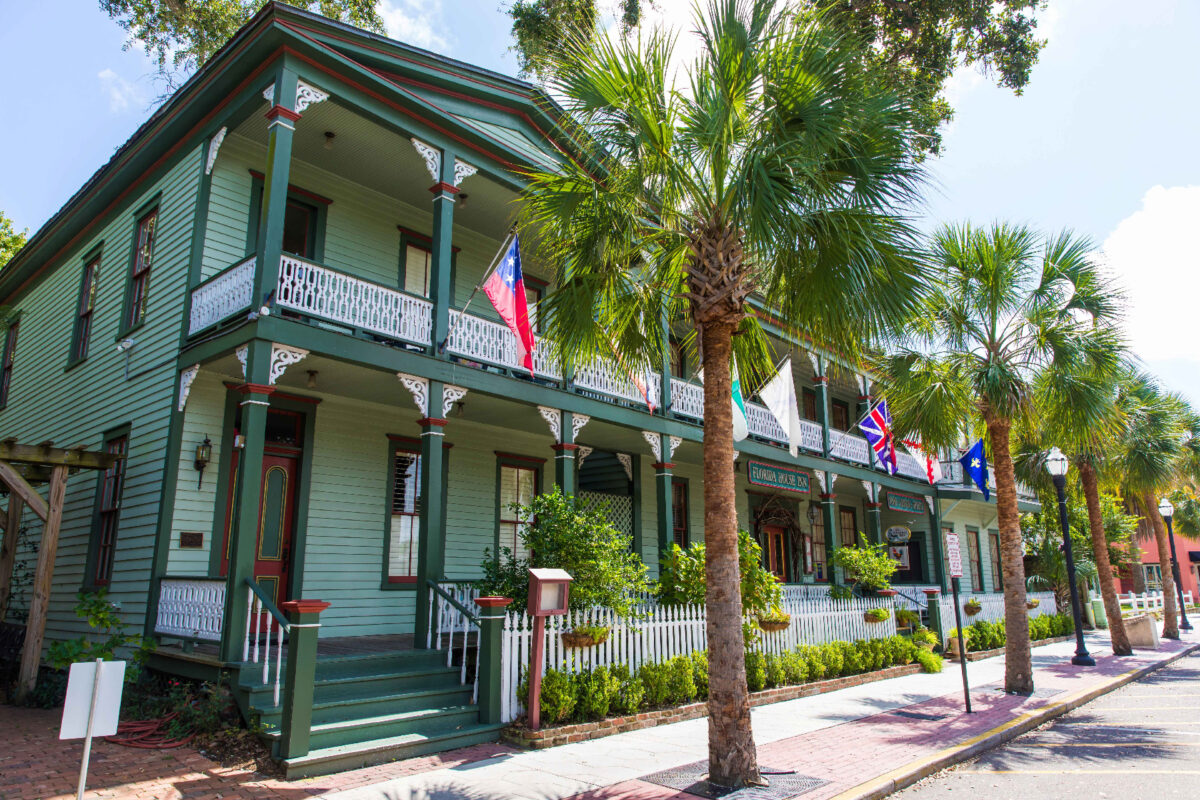 The Florida House Inn flies the flags of all the entities that have influenced Amelia Island. (Photo courtesy of Amelia Island.)
Travel

It’s a town time forgot—or, maybe it just refused to move forward. Serene and unpretentious, Amelia Island remains in the 1900s, reveling in its long, colorful history, quite aware it no longer has to prove anything to the rest of the world.

Therein lies the charm of this tiny stretch of land, 13 miles long and two miles wide, just off the northeastern tip of Florida. And abundant charm it is. Most visitors come for the beautiful beaches, award-winning golf and tennis, luxurious resorts, and other accouterments of world-class vacation destinations.

For me, the main attraction is the seaport village of Fernandina Beach, where a sense of Victorian splendor still abounds. Barely touched by T-shirt shops and cellphone stands, the town pays homage daily to its elegant past.

Also absent is the caterwaul of car horns. They’re just not there. The downside is that drivers stop their cars in the middle of the street to chat with a friend. On the other hand, no one seems to mind.

The island’s modern history dates back to 1562, when it was discovered by the French. Amelia progressed as far as the turn of the 20th century and stayed there. Why not? It was at its peak of prominence and prosperity. Close your eyes and you can still hear the sound of trolleys clunking along cobblestone streets.

As the only territory in the United States to have seen rule under eight flags, Amelia Island still retains many of its influences: from French, Spanish, and British to pirates, patriots, and Confederates. Often summed up as “the French visited, the Spanish developed, the English named, and the Americans tamed” (conveniently overlooking its very prominent position as a pirates’ playground during the early 1800s), Amelia has been at the epicenter of Floridian history and international politics as well.

But that was then—and now is still then. Hailed as “the queen of summer resorts” by American Resorts magazine in 1896, the island soon after lost its tourist base to stops farther south. As a result, mass modernization bypassed the island; a disguised blessing that allowed Amelia to remain an authentic Victorian seaport village.

Street after street, house after house enchants, charms, and captivates visitors, be they on guided tours, informal strolls, or riding a golf cart. Most of the homes, ablaze in multiple shades of tans and turquoise and mints and mauves, sport some strange appendage on the roof alternately identified as a turret, cupola, gazebo, or belvedere. Wraparound porches adorned with decorative balustrades and whimsically designed gingerbreading give each structure its personality and distinction.

Hospitality gushes through every lush towel and hand-designed window treatment of Hoyt House, a 1905 canary yellow and periwinkle blue Victorian dollhouse of a home, mother-henned by owners Todd and Jamie Cohen. Recapturing the tranquility of the Victorian era is unavoidable as you stroll through the resplendent garden, stop for a wistful moment at the gazebo, sway softly on the porch swing, or sprawl out beneath the 300-year-old oak. Sipping a mint julep is optional.

For an even grander step backward, drop by the Florida House Inn, whose 1857 origin makes it the oldest tourist hotel in Florida. Keep an eye out for one of innkeeper Diane Warwick’s prize quilts, which can be found adorning beds, walls, and sofas. Since this is a pet-friendly property, you may find one of them curled up along the way, too.

Each B&B comes with its own colorful history, a past inextricably linked to the development of the island, the state of Florida, and, often, the country. A stroll down Centre Street reinforces the connection with yesteryear. A Norman Rockwell painting of a town, Fernandina’s horse-drawn carriages, outdoor cafes, and quaint shops decked out in resplendent Victorian finery reflect an earlier, easier era. Just the presence of individualized shops is a welcome antidote to the sameness of suburban malls.

And then there’s the Palace Saloon. Operating since 1903, it is the oldest saloon in Florida, with much of the interior dating back to 1878 when the building was first constructed. Although its choice of libations may have changed from Red Cross Rye and Turkey Mountain Corn Whiskey to Miller Light and Sex on the Beach, little else has.

The original swinging doors, embossed tin ceiling, player piano, brass cash register, and opulent 40-foot mahogany bar embellished with hand-carved figures of undraped women still draw the thirsty, the curious, and the fun-loving. The former watering hole of Carnegies, Rockefellers, and du Ponts, as well as the shrimpers and seamen who dominated the port city, is now the tavern of choice for tourists, locals, and shrimpers and seamen who still frequent Amelia Harbor.

Amelia Island’s thriving shrimp industry is yet another throwback to its glory days. The birthplace of the shrimping industry still earns accolades as more than 2 million pounds of shrimp cross Fernandina docks each year. However, they no longer sell for the nickel a pound they cost in 1906.

A walk by the harbor at sunset captures the essence of Amelia Island. The tall masts of the shrimp boats are lined up, silhouetted against the sinking sun, further testimony that the island remains unwilling to give up its past.