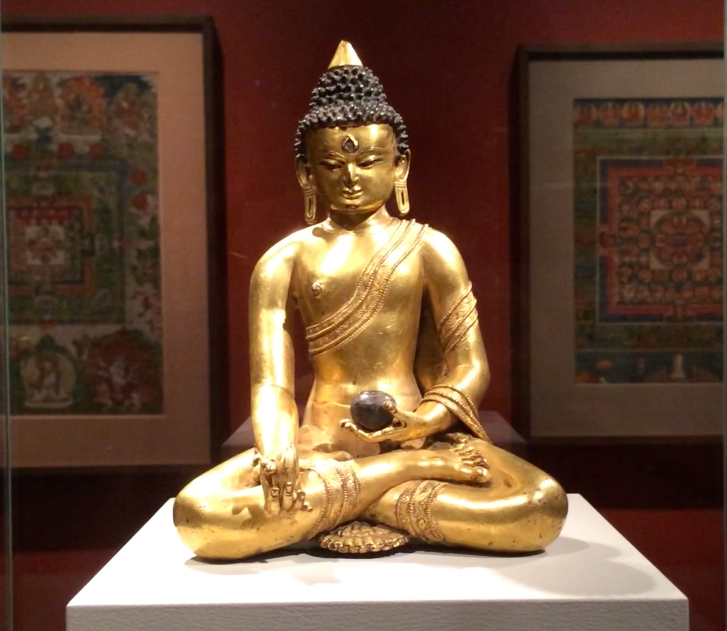 A Medicine Buddha statue at the Rubin Museum of Art in Manhattan, Aug. 8, 2014. The Medicine Buddha is the central figure of Tibetan medicine. He sets the supreme example of compassion that all Tibetan doctors try to show their patients. (June Fakkert/Epoch Times)
Health

NEW YORK—When feelings of sadness and anxiety over a difficult family situation sent Dr. Suzanne Soehner to the office of a Tibetan medicine practitioner, she was hoping for a remedy that would miraculously make her feel better.

She got her miracle in the form of two potent pieces of advice:

“Once you realise that all phenomena are but a dream, then that is the true liberation from suffering.”

Like all of Tibetan culture, the medicine of Tibet is deeply imbued with the tenets of Buddhism—with beliefs in reincarnation and compassion forming part of the bedrock of mind-body healing.

The central figure of Tibetan medicine is the Medicine Buddha.

“[The] Medicine Buddha is the role model for Tibetan doctors in the way we’re supposed to think about our patients and practice,” said Eliot Tokar, an American-born physician specializing in Tibetan medicine. Tokar started practicing Tibetan Buddhism to support his healing work.

Compassion is integral to health and happiness in this system of belief.

“Being compassionate can bring about a prime state of health because the health of the mind is key to the health of the body,” explained Dawa Ridak, a Brooklyn-based Tibetan medicine practitioner, speaking through a translator. “Compassion helps the body maintain balance. … When the mind has happiness, the body automatically becomes healthier.”

Compassion can be easily crowded out by a mind full of attachments. In Tibetan medicine, attachments are seen as throwing one’s health out of balance.

“The cause of disease is attachment,” said Joseph Choeying Phunstoek, a Tibetan physician who received his training at the main centre of Tibetan medicine in northern India and now practices in New York. “If you become attached, … that’s going to be poisoning, imbalance,” he added.

The three primary attachments—materialism, aggression, and ignorance—can lead to different types of disease.

For example, a person with excess materialism may be more prone to troubles related to circulation, the nervous system, and the mind. A person with anger may have illnesses related to the blood and the liver. Ignorance can manifest as conditions that deplete the phlegm-related systems of the body such as digestion.

Although Tibetan medicine believes that illness can stem from spiritual causes, it also recognizes that diet and environmental factors have a role to play. For thousands of years, Tibetan doctors have used trial and error to gain insight into health and healing, making Tibetan medicine one of the most comprehensive medical systems practiced in the world today.

Before any treatment however, practitioners do a thorough assessment of a patient’s health profile. This assessment is done using observation-based diagnostic techniques that include examining the condition of the tongue, eyes, urine, and stool.

Tibetan practitioners also read the pulse and ask a plethora of questions about medical history, personal habits, and diet, so they can understand as many of the health-influencing factors as possible.

The pulse-reading technique in Tibetan medicine is much more complex than just measuring the heart rate. To take a patient’s pulse, a doctor places three fingers on the thumb side of the patient’s forearm. After years of practice, they are able to discern slight variations in strength and rhythm and how this corresponds to the health of different organs in the body.

This technique is surprisingly accurate. An Austrian journalist who came to the United States to explore alternative healing modalities told the Epoch Times that he did not believe the Tibetan doctor who took his pulse and told him he had a kidney problem. A couple of months later, some painful kidney stones convinced this journalist that the doctor had been right.

Diet and lifestyle changes are usually the first tier of treatment in Tibetan medicine. The next tier includes Tibetan herbal supplements, which have anywhere from three to over 150 different plant and mineral ingredients. These supplements have very precise formulas and are produced through very elaborate processes.

What makes these supplements very different from their Western counterparts is that the climate in which the plants grow, the type and quality of the soil, the amount of rain and sun, and the time of year and day of the harvest are considered important factors that affect the herbs’ potency.

In Tibetan culture and medicine, human prayer is believed to have energy. The blessings recited as part of the pill-making process are seen to give the supplements extra oomph.

Born and raised in the United States, Tokar is one of a few Tibetan doctors from the West. He became interested in Tibetan medicine after seeing a friend somewhat miraculously regain her health through this modality.

This friend had suffered for years from tuberculosis, rheumatoid arthritis, and rheumatoid fever. Then she was diagnosed with a painful bone infection, osteomyelitis.

Conventional doctors said she would need at least nine months of medication and surgeries to recover from the infection. She chose to forgo conventional treatments and try the Tibetan way.

Within six months, she was “able to recover her health for the most part,” Tokar said.

He is careful to distinguish between the Buddhist underpinnings of Tibetan medicine and the practice of Buddhism. He said the Dalai Lama explained the connection using the metaphor of the hand and the fingers, which are very connected but not the same thing.

He attributes part of the success of Tibetan treatments to the fact that they can help people better understand their own health, both the physical and psychological components.

Tokar saw this in action with a patient of one of his teachers, a woman who had puzzling psychiatric symptoms. She came to seek help, with psychotherapist in tow, because she had heard that Tibetan medicine had a spiritual perspective.

“[My teacher] did a diagnosis and understood right away … that this is not any kind of spiritually based illness,” Tokar recalled. After a long conversation, it came to light that this woman had been subjected to severe trauma early in life.

“[She] had been placed on various psychiatric medications to help her cope with the trauma, and she had become a pharmaceutical drug addict. … People wanted to idealize it as something very esoteric, but actually it was something very straightforward and physical,” he said.

Tokar’s teacher explained what steps the woman could take to reverse her condition and no longer be a psychiatric patient. At first, this idea confused and enraged the patient, who had become accustomed to the idea that she was psychotic. After she calmed down, however, she agreed to try his suggestions with the help of her therapist.

The advice a Tibetan physician gave Soehner, herself a licensed doctor of Oriental Medicine with a practice in New York City, likewise caught her by surprise. Although it “felt like having cold water thrown in my face,” it was “the best medicine he could have possibly given,” she said.

His words, “Happiness is thinking about others,” have rung true time and again, Soehner noted, especially when she treats patients in her Chinese medicine practice.

“When I am seeing a patient, I am completely absorbed with what I’m going to do to help this patient. It’s like I disappear for that period of time … because my attention is completely focused on helping my patients,” she explained.

She has found that volunteer work is a very practical remedy that helps patients find more space and perspective on their problems.

“There is nothing like volunteering with those less fortunate than oneself to completely alter one’s perception of one’s own problems and to foster an attitude of gratitude, which is a healing state of mind,” Soehner said. “Sometimes that alone is enough to shift a person into a more expansive healing experience.”