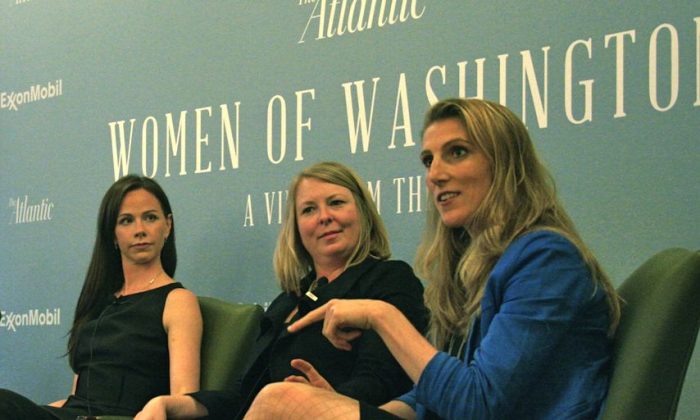 WASHINGTON—Three young women, who lead initiatives to improve global public health, shared their insights and experiences on a panel sponsored by The Atlantic.

In the final session of the 2013 “Women of Washington” series on Oct. 11, Barbara Bush, Catherine Connor, and Vanessa Kerry, with Susan Dentzer acting as moderator, discussed their individual initiatives to improve global public health. Each woman described how she was inspired to take on the challenge of global health issues.

Barbara Bush, daughter of former president George W. Bush, co-founded Global Health Corps (GHC) in 2008. The concept of GHC took shape from a team 6 people in their twenties, who shared the belief that their generation would step forward and serve to build a world in which the people have access to comprehensive health care.

“Most of our partners did not request doctors and nurses,” Bush said.

The concept in GHC is not to provide doctors and nurses in countries where heath care is lacking and under resourced, nor is the focus to look for fellows who have backgrounds in public health. Rather, GHC works from the premise that the health care inequities stem from social, political, and economic issues that require strong and innovative leadership to address.

Therefore, GHC is looking for fellows with the potential to be agents of change: adaptive, innovative, collaborative, and committed to social justice.

Catherine Connor, Director of Public Policy for the Elizabeth Glaser Pediatric AIDS Foundation (EGPAF), said the mission of the foundation boils down to “no child be born with HIV and no child die from HIV.” The focus is on helping the patient population and not on the disease.

“3.3 million children live with HIV and most are not getting treatment right now,” Connor said.

According to Connor, for a country with a high incidence of HIV, “to prevent increased infection rate in children of AIDS, you have to look at their comprehensive maternal health program.”

EGPAF has been around for 25 years working to help save children. Now, it has programs in 15 countries and [6,800] health care sites around the globe, according to the Chip Lyons, president and CEO of EGPAF.

“From Lesotho to Mozambique to Kenya, using innovative technologies and proven tools, EGPAF has brought the services women living with HIV need to stay healthy and to prevent the transmission of HIV to their babies to over [17 million] women,” wrote Lyons on the EGPAF website. (The numbers here and above in brackets are updates of Lyons’s numbers.)

Initially, EGPAF’s intervention may have been minimal, perhaps only administering medication aimed at reducing infection by 50 percent. Today, EGPAF works with women throughout the entire course of their pregnancies. The goal is to ensure the health of mothers so that they can survive to take care of their children, Connor said.

Beginning in her childhood, Dr. Vanessa Kerry, Founder and CEO of Seed Global Health, always wanted to be a healer. She said that she first realized she would become a doctor in the third grade.

When she was 14, she accompanied her father, then-Massachusetts Senator and current Secretary of State John Kerry, to Vietnam in 1991. Kerry said she was shocked by the degree of poverty that she witnessed first-hand.

Greatly disturbed by the lack of accessible hospitals in Vietnam, she felt deeply that something was wrong with the situation. She was thus inspired to change what she saw.

The GHSP program offers loan and debt repayment up to $30,000, and Dr. Kerry said that this feature, in particular, is helpful for volunteers due to the fact that the average rate of student debt for a graduate from a public medical institution is $150,000.

GSHP is “placing 10-12 health professionals in training institutions in each of the three partner countries,” according to the Seed Global Health website.