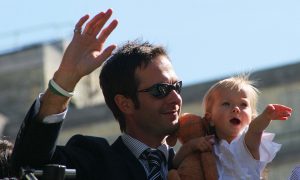 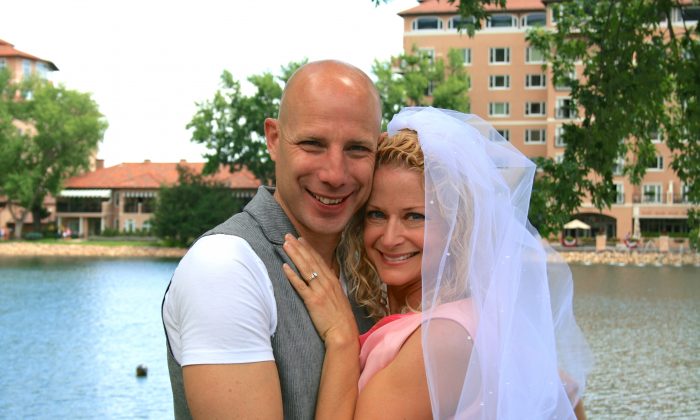 This Couple Gets Married Every Year

Marriage can be a controversial topic in American society. Many people may wonder how old they would like to be when they tie the knot, and some dismiss the idea of marriage entirely. One couple in Rancho Palos Verdes, California has been married for 21 years, and they’ve had 24 weddings.

Evan and Susan Money met each other though a friend of a friend on a surf trip in Mexico in 1990, and they got to know each other as friends. At the beginning, Susan thought Evan was just another surf punk.

After five years of not seeing each other, the couple ran into each other in a supermarket. Evan asked for Susan’s number not to get a date, but to get in touch with some old friends. However, when Evan called her, she asked him out to the movies.

“I had to ask him out, and then he had to think about it so he’s still living that one down,” Susan told The Epoch Times.

Despite a rocky beginning to their first date, the two hit it off. About two or three weeks later, the couple knew they wanted to get married. However, the two still needed to get to know each other for the next year. Furthermore, Evan had promised his mother that he wouldn’t date so he could focus on his business.

About a month and half in, Evan took Susan to meet his mother. He wanted to be a bachelor forever but he also wanted to marry Susan, and figured his mother would be able to turn Susan off.

“Deep down inside of me a part of me is really excited to marry her, so it’s kind of this Jekyll and Hyde [mindset] almost,” Evan explained as he wanted to marry Susan but was afraid of giving up his bachelor lifestyle.

Evan’s mother stressed how important her son was to her, and he conveniently left the room to have Susan take the brunt of the questioning. However, his plan backfired. When the Evan got back to his apartment his mother called and said “Evie, Susan is a woman of substance.”

Evan dropped the phone, and his bachelor side had died. However, he was ecstatic because that was the answer he had been looking for.

After dating for 11 months, Evan proposed to Susan in front of the high school French class she taught. Six months later, the couple married on July 5, 1997 in Manhattan Beach, California. They assumed this would be the one and only time they would get married.

Growing up in Los Angeles, Evan had three perspectives on romantic relationships based on the people he knew. One could be married and miserable, divorced and desperate, or single and cynical.

“Deep down inside, I knew I wanted something different,” Evan said.

Evan and Susan tried to figure out how they could be different, and wound up going to personal development seminars together.

That’s when they embarked on a journey of personal growth. During one of these seminars they listened to a man who would have an anniversary party at his house every year and remarry his wife. That’s when Evan and Susan decided to take the idea a few steps further.

Susan turned to Evan with tears in her eyes and told him that she wanted to the same thing, but do it in a different state or country every year. However, at the time the couple had very little money.

Nevertheless, the couple figured they could get remarried frugally in Tijuana, Mexico.

A Series of Nuptials

However, as the two were planning the wedding, they won an all expense paid trip to Paris, France.

Despite not having a lot of money, the couple was able to get remarried in the garden at the Palace of Versailles. It was this second wedding that really opened up their minds to what they could do and where they could go to get remarried.

Even though every one of the 24 weddings has been special, both Evan and Susan have certain favorites. For Susan, renewing their vows at the Atlantis Resort in the Bahamas was particularly special. The two were married with dolphins, and both had their own dolphins as their respective “best mammal” and “mammal of honor.”

For Evan, one of the most special weddings was in the Green Bay, Wisconsin at Lambeau Field. One of the coaches of the Green Bay Packers officiated the wedding in full coach garb, and recited Vince Lombardi quotes about love and togetherness.

The couple has also remarried in a 300-year-old windmill in Germany and in a hot air balloon over New Mexico.

One time the couple was supposed to get remarried in Portland, Oregon, but the pastor had to cancel because of an emergency. The couple only had a few hours to get back to airport, and they ended up renewing their vows in the corner of the airport terminal.

Both Evan and Susan are happy as can be, and are always planning for another wedding or are enjoying another honeymoon. They have such an amazing relationship because they both work at it, and they’re both constantly focused on being better. They hope other couples can have the same experience, and hope they don’t focus on the tedious aspects of a marriage.

The duo is actually working on a hope-based reality show called “Happily Ever After,” in which they will feature couples who are in a rut, give them some tools and encouragement to work on their relationship, and remarry them at a surprise location in Los Angeles, California.

Their own next wedding will be in the Teton Mountain Range, Wyoming in June 2019.

“Every year is totally different, and we’ve gone big and we’ve gone super small. We just make it an adventure, and I get a wedding out of it and Evan gets a honeymoon and it’s all good,” Susan said.