'We're part of something bigger than ourselves' says teacher 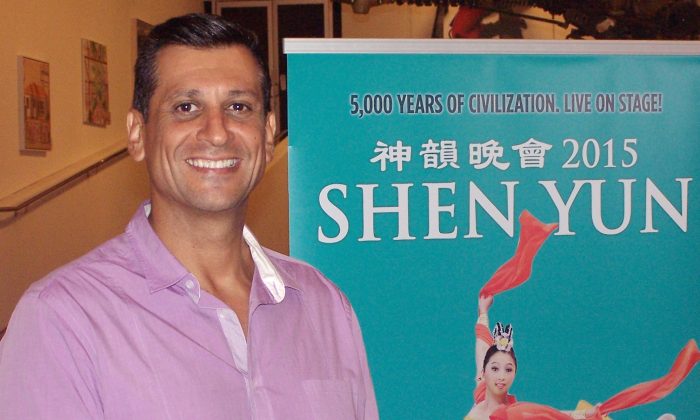 GOLD COAST, Australia—Basil Mouasher spoke straight from the heart to the Shen Yun Performing Arts New York Company. “It was really wonderful! It was extreme talent! And such great costumes! Elegance!” he said.

Shen Yun is based in New York, the creation of a group of award winning Chinese artists who in 2006 aspired to reawaken China’s authentic ancient culture to the present day and share with the world.

With a new program and hundreds of new costumes every year since, four Shen Yun companies visit more than 100 cities and giving some 400 performances simultaneously on prestigious stages in 20 countries.

Mr. Mouasher, master and founder of The Kanetica Method, a joint specialist, was pleased to see so many young performers “integrating ancient civilisation and all of its richness,” he said.

Mr. Mouasher could feel a spiritual quintessence oozing from within every Shen Yun performance, “the expression and the movements, the flares, the smiles, gestures, sounds, the jingles, the napkins, I mean this is all so great to see. It has to come from something much bigger, even though we don’t actually see it.”

The Shen Yun website says its songs are “brimming with philosophical reflection about human life.” Containing deep layers of meaning, the lyrics go beyond the boundaries of nation, race, and culture.

Mr. Mouasher said “I believe in the divine.” He felt Shen Yun expressed the spirituality in so many different facets of the performance. He felt he could see the divine coming through the dancers and their performance.
“A reflection of self that they are connected within the Divine and that comes to the forefront as an expression … it’s like a presence,” he said.

“The show itself is amazing. It’s really good to see that such a classic is still here today and still wanting to come forward…just extraordinary, the costumes, expressions, the consistency, the choreography. I could go on and on.”

Agata Mouasher who teaches inter-cultural communication at University accompanied her husband to see Shen Yun. “I loved it,” she said. “Wow!”
She spoke in awe of the performers and praised the narrators presenting each item in English and in Chinese, even the lyrics sung in Chinese had English subtitles across the digital backdrop screen.

“Colorful, graceful, everybody just performed so beautifully,” she said. The costumes are wonderful, the music and the blend between the Eastern and the Western music was very nice.”

But more than an amazing performance, Mrs. Mouasher felt Shen Yun brought a message of the divine.
“The need to remember we are part of something bigger than ourselves, something that is divine, something that we cannot see, but we can believe in and have faith,” she said.

She said Shen Yun conveyed other valuable messages too, such as the concept of courage, compassion, the fight between good and evil, and to stand up for a principle.

She also felt it was very important that China’s 5000 years of culture was preserved for future generations.

General Manager ‘On the Edge of his Seat’

General manager of Transport and Fuel, David Udinga, isn’t a fan of dance performances, but tonight he sat on the edge of his seat from the start to finish.

“The females and the dresses and the way they moved across the dance floor, very entertaining, and I loved that the men, with the dance and the martial arts side of it, their moves—it’s fantastic.”

Mr. Udinga sensed there was more to the story-based dances, but key issues that stood out were the loss of spirituality and loss of compassion in China today.

He was accompanied by Ania and her twin daughters Antoinette and Zofia. He said he hoped the girls remember Shen Yun’s message: “to love one another with compassion.”

From the time the curtain went up to when it fell, Mr. Udinga enjoyed China’s myths and legends, documented and passed down uninterrupted for 5,000 years, the website explains.

Antoinette appreciated the Shen Yun Orchestra that blends ancient Chinese instruments such as the soul-stirring erhu and the delicate pipa on top of a full orchestra of Western strings, percussion, woodwinds, and brass.

“I liked the dance because of all the flexibilities and all the things that they were doing, such as the backflips and twirls, things like that,” she said.

Zofia thought the performers were spectacular and if she could, she would influence everyone go and see Shen Yun perform every day.

Direct from performances in Boston, the New York-based Shen Yun left snow blizzards behind to continue its 2015 World Tour on the Gold Coast. From there, they will perform at Bisbane’s QPAC Feb. 3 and 4.