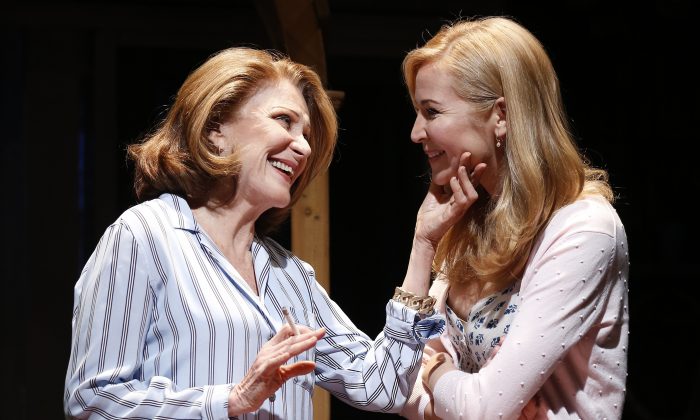 Theater Review: ‘Too Much Sun’

NEW YORK—The prologue, played in front of the curtain in Nicky Silver’s Too Much Sun, features the hilarious supercomic and star Linda Lavin as actress Audrey Langham performing the dress rehearsal of Medea. Her red-and-gold chiffon costume is garish; it’s too hot here (Chicago!), and who wants to see Medea anyway, she complains. She walks off the stage and out of the job.

She lands, uninvited, on the Cape Cod doorstep of her estranged daughter, Kitty (Jennifer Westfeldt), and husband Dennis (Ken Barnett). Kitty is not happy to see her mom, but Audrey, with the insensitivity of a whirlwind, manages to make herself at home and to insinuate herself into the lives of all present.

Those present include next-door neighbor Lucas (Matt Dickson), a young lad who deals drugs when he has a chance; his very proper father, Winston (Richard Bekins); and Gil (Matt Dellapina), sent by Audrey’s agent to bring her back to the show.

Being of softer spirit than Audrey and really wanting to become a rabbi, Gil is no match for Audrey’s fierce determination to do as she pleases.

Dennis, an ad man hoping to spend the summer working on a sci-fi novel, gets illogically involved with the young Lucas, who carries emotional baggage from the earlier suicide of his mother.

Audrey, who desperately needs a meal ticket, sets her sights on Winston, and the two develop a relationship, which may lead to marriage. Married multiple times in the past, Audrey is an expert in attracting a man.

One particularly appealing and affecting scene has Audrey persuading the tentative Winston to dance with her. She also serenades him with “Surabaya Johnny,” the Brecht-Weill song expressing the woes of a betrayed woman, in exaggerated, throaty German.

An unexpected tragedy pulls elements into place, and things get back to almost normal in this subplot-heavy epic.

Linda Lavin might be called a law unto herself. Never missing a beat, she is a supreme actress-comedienne and is the glue that holds the show together.

Too Much Sun is a comedown in comparison to Nicky Silver’s prior play, The Lyons, which moved to Broadway from off-Broadway and earned Lavin a Tony nomination. But Silver, a prize-winning playwright, has approximately a dozen plays to his credit. They can’t all reach the same level.

In any case, he has a unique view of the world and a unique way of expressing that view.

Arguably, the other standout in the cast is the modest but attractive Richard Bekins as Winston. In the important role of Audrey’s daughter, Jennifer Westfeldt plays her too depressed too much of the time.

Director Mark Brokaw, whose numerous credits also include the aforementioned “The Lyons,” effectively does the honors here.