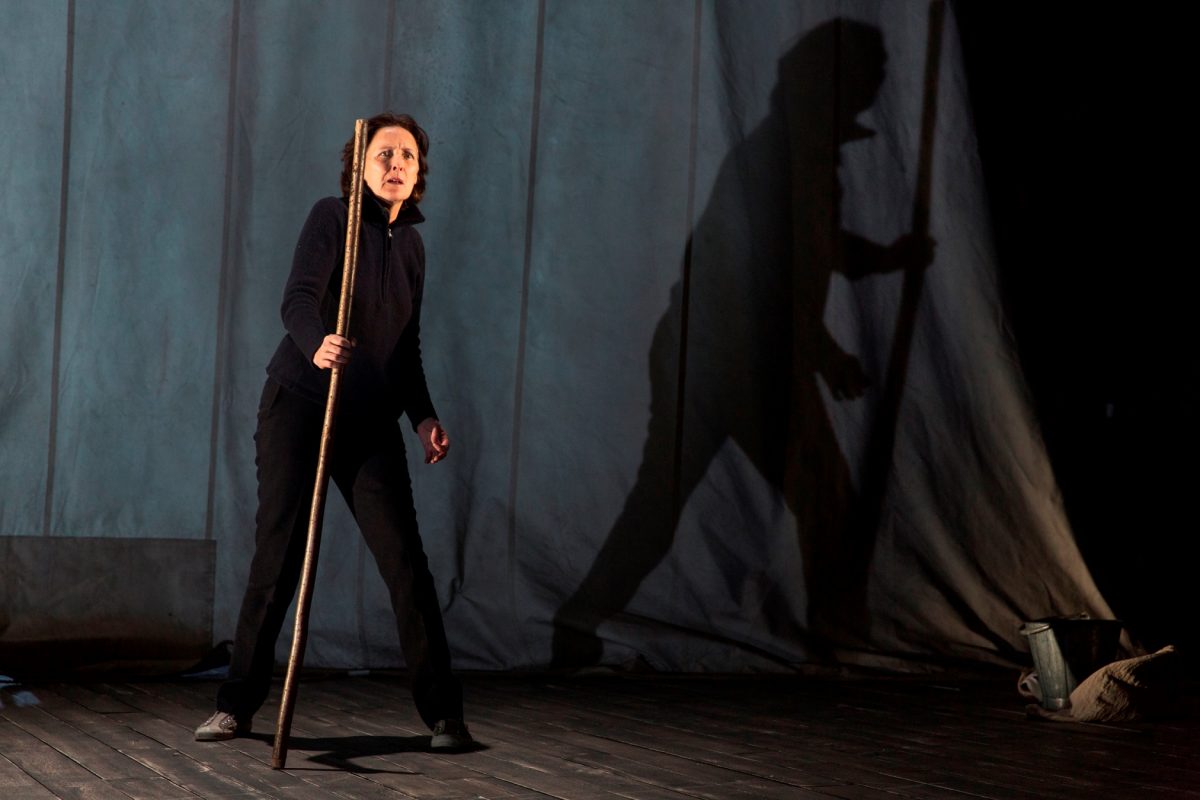 Fiona Shaw in “The Rime of the Ancient Mariner.” (Richard Termine)
Arts & Culture

Theater Review: ‘The Rime of the Ancient Mariner’

A whale of a tale brilliantly told
BY Judd Hollander TIMEDecember 30, 2013 PRINT

NEW YORK—Fiona Shaw scored an acting triumph with the U.S. premiere of The Rime of the Ancient Mariner. This epic poem by Samuel Taylor Coleridge, first published in 1798, was brought wonderfully to life at the Brooklyn Academy of Music as part of their Next Wave Festival.

Shaw played the nameless title character, the sole survivor of a tragedy at sea, who was doomed to wander, imparting his tale of death, life, and redemption to those destined to hear it.

In this case, the recipient of the tale was a guest at a wedding whom the Mariner encountered. As they waited for the ceremony to start, the Mariner began to roll back the years as his story unfurled.

Having sailed into dangerous and uncharted waters near the Antarctic, the Mariner and the ship’s crew found themselves hemmed in on all sides by ice and fog. That is, until an albatross appeared and led the boat to safety.

The bird visited and followed the ship for several days until the Mariner shot it dead. Once the albatross died, the sea and wind became silent and the boat hopelessly lost. It was as if the heavens themselves were punishing the ship and its crew for what the Mariner did.

At least that’s what the rest of the crew chose to believe, blaming the Mariner for their predicament and forcing him to wear the albatross around his neck as a badge of sorrow and shame.

This is the tale Shaw inhabited, acting out the story in a voice filled with passion. The tale unfolding pulled in the audience, placing us on the deck of that doomed ship and allowing us to see the faces of the angry crew.

Anger changed to despair and hopelessness, until the crew saw another vessel approaching and dared for a moment to hope all was not lost—and then it became apparent salvation was not in the cards.

Yet through it all, the Mariner watched as the elements and circumstances changed and changed again, until they finally conspired to return him home. Yet he was hardly unscathed in the returning.

Shaw embodied the role of the Mariner perfectly, bringing the character, his message, pain, and spiritual transformation brilliantly to life.

One of the most compelling points in the poem is its underlying theme of redemption and the question of who is guiltier: the one who takes action, wrong though it may be, or those who sit by and applaud the actions of others. The crew initially did say the Mariner was right to kill the albatross, only to turn against him when misfortune occurred.

This was one of many questions the audience was left to ponder. Another was whether the Mariner was more fortunate than those who did not return.

Shaw was helped immeasurably by dancer Daniel Hay-Gordon, the only other performer in the piece. Hay-Gordon served as both the silent Wedding Guest, listening in rapt attention to the Mariner almost without choice, and also as the Mariner himself when it was Shaw’s turn to recite the tale from the Wedding Guest’s point of view.

The two switched characters with little more than a change of hats and shift of position. Hay-Gordon also brought his dancing experience to the story, using various gestures to help emphasize certain moments of the tale.

Also adding to the performance was Chloe Obolensky’s sparse set consisting of a few props, such as some rope and a weathered white curtain to suggest a sail. These perfectly set the mood and location of the story.

Also quite good were the strong and compelling sound effects composed by Mel Mercier and the expressive choreography by Kim Brandstrup. These factors, coupled with Phyllida Lloyd’s quiet and sure direction, allowed every element of the production to come together for maximum effect.

Offering an acting tour de force by Shaw, with some great help from everyone else involved, The Rime of the Ancient Mariner called to mind a time long gone of ships and sailing men, of legends and destinies involving things that cannot be explained, and put those fortunate enough to attend a performance of this production right in the heart of the action.