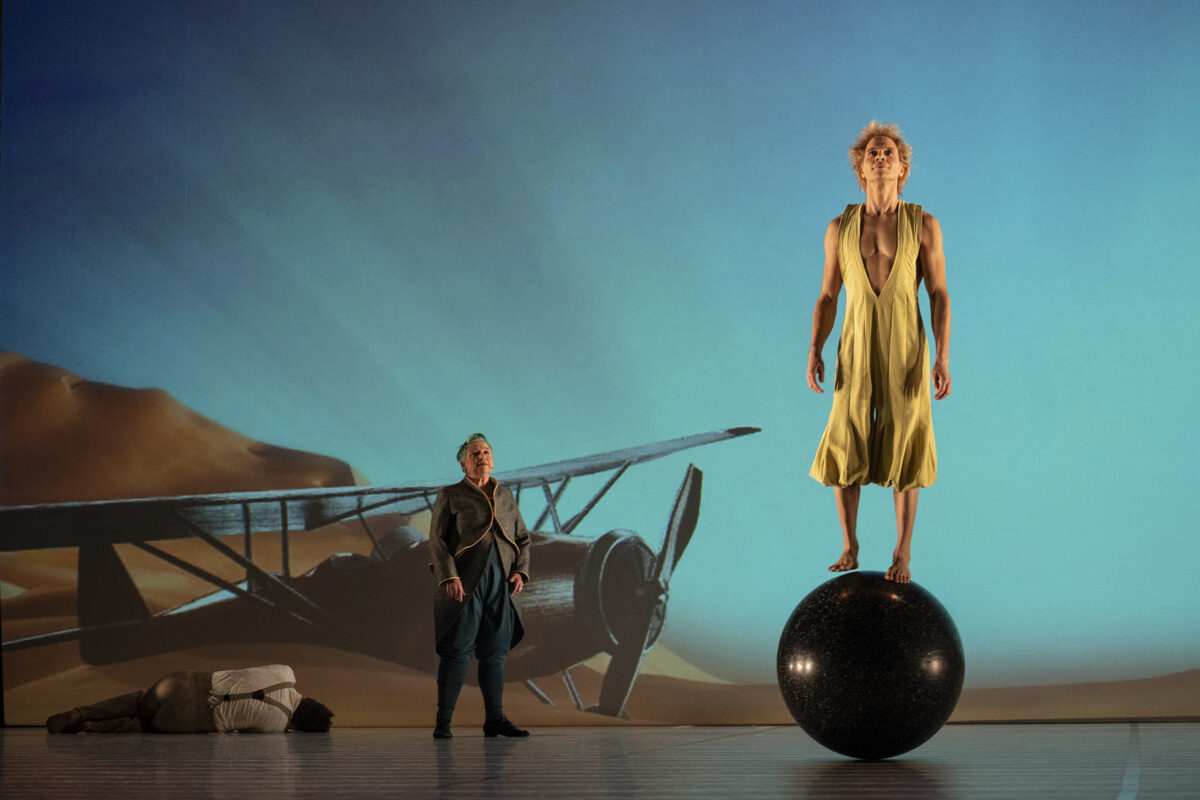 Theater Review: ‘The Little Prince’: A Search for Meaning

NEW YORK—When one enters the massive orchestra section of the Broadway Theatre, the expectations of a coming spectacle are all around, from not-quite-distinct images moving about the stage curtain, ceiling, and floor of the venue, to the somber yet stirring musical tones, courtesy of composer Terry Truck. For all its promise, what’s presented only partially takes flight.

Based on the classic 1943 children’s book by Antoine de Saint-Exupéry, “The Little Prince” begins, quite literally, in the air. The Aviator (Aurélien Bednarek) twists in a parachute after having to bail out of his single engine plane, shortly before it crashes into the vast expanse of the Sahara Desert. He must now struggle to repair his craft, so he can get to safety before he perishes from thirst.

To his great shock, the Aviator realizes he is not alone. A young boy (Lionel Zalachas) seemingly appears out of nowhere and asks him to draw a sheep.

This new arrival on the scene is the show’s title character, the Little Prince. This being comes from a distant world, where he spends his days raking out his three volcanoes, which barely come up to his knee. He also takes care of a single Rose (Laurisse Sulty) he found in a garden; she has become quite attached to getting his attention.

Growing unhappy with the continued sameness of his life, the Prince journeys to other worlds in a search of something he does not yet understand. On his travels he meets a megalomaniacal King (Joän Bertrand) on a planet with no subjects; a Vain Man (Antony Cesar) so obsessed with his looks that he could become the poster boy for narcissism; a Drunkard (Marie Menuge) in the complete depths of despair; and a Businessman (Adrien Picaut), who so continually counts the things he owns that it leaves him no time for anything else.

The Prince also encounters a Lamplighter (Marcin Janiak) who must turn on his lamp each evening and then off each morning. Quite a chore as every day and night on that particular planet is only one minute long.

“The Little Prince” offers the possibilities that come with a journey of self-discovery and attempting to find one’s place in the cosmos. This is meant not only in terms of where one truly belongs, but where one needs to be. And what is initially overlooked in one’s own backyard might be most important of all.

In meeting the different beings in his travels, the Prince begins to realize how much those he left behind depend on him. It’s also a lesson he learns on Earth when a wild Fox (Dylan Barone) tells the Prince: “If you tame me, we will need each other.” This highlights the concept of need tied to the importance of companionship, and how continued interaction with others helps lead to a fuller sense of identity and purpose.

The entire story is punctuated by some wonderfully intricate dancing and acrobatics. These efforts range from a person dancing on a ball—which is how the Prince makes his first entrance—to some complex aerial exercises that take place high above the stage.

Highlights of the show include the performance by the Vain Man as he dances among a seemingly endless array of pictures of himself; an aerial duet between the Prince and the Rose; a post-show sequence where the Aviator flies over the audience; and a stunning ballet on the planet of the Lamplighter, the latter helped by some lovely projection work by the video design team. Credit must also go to costume designer Peggy Housset for her imaginative efforts throughout.

Unfortunately, Anne Tournié’s excellent work as a choreographer doesn’t translate to her role as the show’s director, with the entire production feeling far too disjointed. The audience is relegated to the role of a passive observer rather than to feel as if they’re part of what’s unfolding on stage.

A good part of this mishandling also comes down to a basic weakness in the show’s structure. The entire exposition is told by a narrator (Chris Mouron) instead of having the dialogue assigned to the various characters, which would have given an extra level of identity to the characters.

In addition, there are moments when it’s not clear which person the narrator is actually speaking for. This confusion stops any forward motion of the story.

Definitely suited more toward the younger set, as well as those who retain a childlike sense of wonder, “The Little Prince” has a lot to offer but, all too often, it simply just doesn’t fly as high as it should.