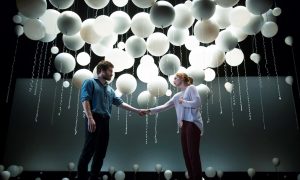 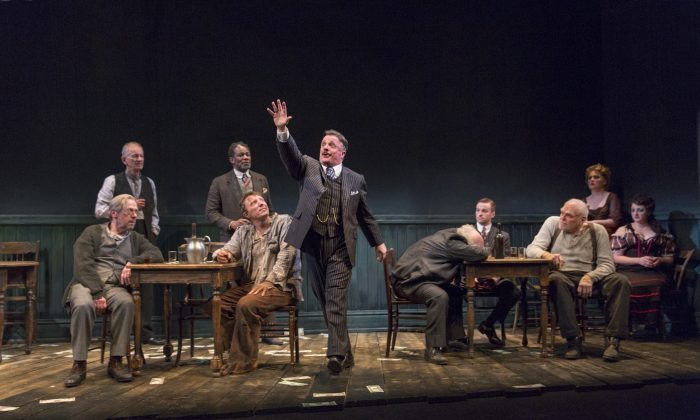 NEW YORK—A few minutes into Eugene O’Neill’s “The Iceman Cometh,” now at the Brooklyn Academy of Music, it becomes apparent the figures onstage comprise some of the most pathetic people ever seen.

Director Robert Falls and a stellar cast led by Nathan Lane and Brian Dennehy present a brilliant production of lost souls clinging to illusions found in a bottle, with one man determined to lead them into reality’s cold embrace.

The story takes place in a New York saloon owned by the ironically named Harry Hope (Stephen Ouimette), a man who hasn’t left the building since his wife’s funeral 20 years earlier. Harry, like everyone else who has made the bar their home, clings to the idea of changing his life “tomorrow.” All the while he takes comfort in being perennially drunk.

Among the other residents, all of whom live in rooms upstairs, is Larry Slade (Dennehy), a former anarchist, now disillusioned and simply waiting to die. Yet Larry’s wish to be left alone is stymied by the sudden appearance of Don Parritt (Patrick Andrews)—another name with an ironic twist—the son of a woman Larry knew in his former life.

The bar’s inhabitants are eagerly awaiting the arrival of Hickey (Lane), a traveling salesman who always comes around for Harry’s birthday, happily providing drinks for all.

However, this time Hickey arrives cold sober and claims to have found inner peace.

His peace has come by giving up unrealistic expectations and facing life as it actually is. It’s a gift Hickey is determined to pass on to his friends at the bar.

Over the next several hours, Hickey becomes a sort of gadfly, verbally prodding and poking at everyone, making them ashamed to drink in front of him as Harry’s party turns into an unqualified disaster. As the group’s collective alcoholic haze begins to fade, long submerged feelings of prejudice, guilt, and shame start to emerge.

“The Iceman Cometh” is all about the importance of pipe dreams and how they are often what keep people from completely surrendering to despair, as well as the desperation to regain said dreams once they’re taken away. The play makes clear what happens to those who no longer have any dreams at all.

The main strength of the play is that just about every character comes across as fully formed. From night bartender Rocky Pioggi (Salvatore Inzerillo) insisting he’s not a pimp, even though he manages two street walkers (Lee Stark, Tara Sissom), to one-time war correspondent James Cameron’s (James Harms) continual determination to get his clothes cleaned so he can get his job back, each feels so real that their various situations cut right to the bone.

You may not particularly like these characters, but you can definitely understand and certainly pity them.

Lane gives one of the best performances of his career as the outwardly jovial Hickey, determined to bring to everyone else the same kind of contentment he himself has found, though failing to realize that his particular solution may not work for everyone.

Nathan Lane gives one of the best performances of his career.

Hickey’s final attempt to convince his friends of the correctness of his actions—Lane running the gamut of emotions from pain and regret to anger and remorse—is absolutely riveting.

A marked contrast to Hickey’s garrulousness is the somber persona Dennehy presents as Larry in a brilliant performance of a man who refuses to be drawn back into a situation where he is forced to care about anything. Yet in another ironic twist in a play filled with them, Larry becomes the one character most affected by Hickey’s efforts.

It’s a testament to Dennehy’s ability that this subplot comes across so powerfully, rather than being somewhat lost in the shuffle as it has been in previous productions.

Adding to Dennehy’s performance is the fact that Andrews is able to show the inner turmoil that Parritt is feeling as he tries to run from his own reality while pleading to Larry for absolution.

John Douglas Thompson is excellent as Joe Mott, a black man who once ran his own gambling joint; he shows the anger and rage he feels after a lifetime of having to put on a show in order to be accepted by whites. Joe is an especially pitiful figure when first seen simply because he’s one of the few people who has not yet passed out.

John Hoogenakker cuts a sad figure as a former Harvard law student, especially when, clad in a new suit, thanks to Hickey, he valiantly struggles against delirium tremens.

Ouimette is good as Hope, a man perhaps the most pathetic of all, in a scene where he asks again and again what Hickey has done to the booze because no one can seem get to drunk anymore no matter how they try.

Robert Falls’s direction is extremely strong, placing just the right emphasis on every moment throughout with nary a wasted line of dialogue present. It also helps that Falls and just about the entire cast had previously done this production at the Goodman Theatre in Chicago in 2012, and the deep familiarity and understanding of the material clearly shows.

Kevin Depinet’s set designs are quite good, especially the bar in Act 3. The scene nicely uses the complete depth of the stage while showing the long walk to the world outside that all those present must try to take.

Natasha Katz’s lighting is excellent, almost its own character in the piece, helping to gradually bring the bar and those in it to life.

The only technical problem in the play, a sadly often reoccurring one at BAM, is the sound. It is hard to hear several of the actors, particularly Dennehy, at points. This issue becomes more troublesome as the play goes on and is clearly evident in the final scene.

Exhausting and exhilarating, Falls, Lane, Dennehy and company take what is already an epic piece of theater and turn it into a completely unforgettable experience.