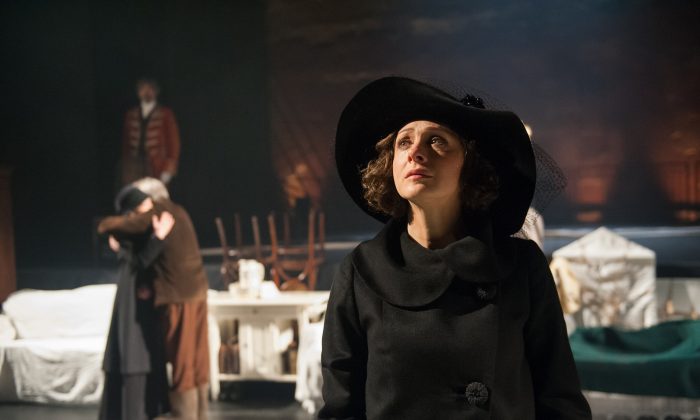 Mme. Ranevskaya (Ksenia-Rappoport) says goodbye to her beautiful estate and the legacy of the Russian aristocracy in “The Cherry Orchard.” (Stephanie-Berger)
Arts & Culture

BROOKLYN, N.Y.—Director Lev Dodin, artistic director of the Maly Drama Theatre of St. Petersburg, Russia, is noted for his unique, often audacious, productions. His current version of Anton Chekhov’s “The Cherry Orchard” at BAM’s Harvey Theater is an example.

Aleksander Borovky’s design echoes Dodin’s concept of minimalism: letting the play speak for itself. The set consists of a few nondescript chairs, a table, cot, and bookshelf, rather than set pieces. However, the audience seats are each covered with linen, as it appears onstage covering the furniture pieces.

The genius of Chekhov ensures that what we see passing before us is the downfall of the once ruling aristocracy of Russia.

Of particular interest is a large white sheet extending across about three-quarters of the front of the stage; this is later to be used as a screen for the projection of “home movies” showing the family in a jovial mood frolicking against the marvelous cherry orchard.

The whole is in Russian with English supertitles.

The major action begins with the entrance of self-involved but charismatic landowner Madame Ranevskaya (Ksenia Rappoport) after a five-year sojourn in Paris involving an unhappy love affair.

She had fled to Paris soon after the drowning death of her young son, an event from which she has never recovered. She is accompanied by her daughter, Anya (Danna Abyzova).

Others in the retinue or present at the estate are Varya, her serious-minded adopted daughter (Elizaveta Boiarskaia), who has been in charge of the estate in Ranevskaya’s absence; Gayev, Ranevskaya’s  brother (Igor Chernevich); Charlotta, a governess who often performs magic tricks (Tatiana Shestakova); and Trofimov (Oleg Ryazantsev), a student who had tutored Ranevskaya’s deceased son.

A friend of the family, Lopakhin (Danila Kozlovskiy), a peasant become wealthy merchant, is also present. He unfortunately serves as the bearer of bad news, as he informs Ranevskaya that the estate is to be auctioned off in a few months due to nonpayment of mortgage fees.

However, Lopakhin offers a solution to the dilemma: Ranevskaya and her brother have only to sell off the estate in parcels and build holiday homes on them. These will be snapped up in a jiffy by the burgeoning low- to middle-class folks who are beginning to appear on Russia’s scene.

But Ranevskaya and Gayev are offended by the thought of tearing down their beautiful estate, including the extraordinary cherry orchard, and letting people who are less than their equals on the socioeconomic level overrun their territory.

Arguably this last element is the point wherein “Cherry Orchard,” in contrast to the other three major works by Chekhov, holds a lasting impression on audiences worldwide. These issues involve us all, even today, with clinging to the old and fighting off change, issues of territory, and bias against those who are different, for example.

The famed quartet consists of the exquisite “The Seagull,” “Uncle Vanya,” “The Three Sisters,” and “The Cherry Orchard,” the last play Chekhov wrote. He died only four months after it was first produced in 1904 by the Moscow Art Theatre, headed by Constantin Stanislavsky.

Unable to come to a decision, Ranevskaya procrastinates until it is too late. Hoping for a miracle, she refuses to believe that the estate will actually be auctioned off. When the day comes, she is in shock. All the more so because the buyer is none other than Lopakhin.

The high dramatic point of the production is Lopakhin’s flamboyant performance as he lets loose his pent-up envy and rage. He cries, “My father and grandfather were serfs here; they weren’t even allowed in the kitchen.” And now, “I can buy everything!”

The scene amounts to an aria, if it were an opera. Lopakhin also performs a wild dance taking him in front of the stage, onstage, and backstage. He races up and down the aisles with intense energy. He even sings, in English: “I had it my way,” à la Frank Sinatra.

It is a tour de force.

Finally, all participants are made to realize that a new life must begin for them. A tentative romance between Lopakhin and Varya is never realized. All must go their separate ways. Ranevskaya must resign herself to the loss of her beloved cherry orchard.

Here is a first-rate cast in an exemplary production.

We are not viewing merely specifics of one family. The genius of Chekhov ensures that what we see passing before us is the downfall of the once ruling aristocracy of Russia and the ascendancy of the lower classes. Chekhov, being an artist, possibly sensed this societal change before it actually took place.

Chekhov had written “The Cherry Orchard” as a comedy and was incensed when many directors saw it as a tragedy. Here, Lev Dodin appears to follow the playwright’s wishes to some extent, merging tender moments of poignancy and tragedy with comedy in the way, one might say, that life itself does.

Here is a first-rate cast in an exemplary production.