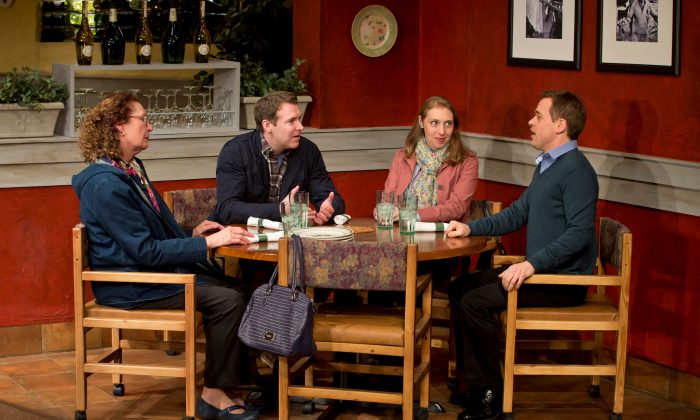 The restaurant is not even privately owned; it’s part of a restaurant chain. It’s managed by Eddie (T.R. Knight), desperately working to make a go of it. Business is poor, but Eddie loves Pocatello. His great-grandfather had settled here years before.

Given equal import are several employees: a waiter, Troy (Danny Wolohan), his wife, Tammy (Jessica Dickey), and their daughter, Becky (Leah Karpel). There is also Troy’s father, Cole (Jonathan Hogan), visiting from the local County Care home to later celebrate his birthday at the restaurant.

All the participants can be described as nothing less than idiosyncratic. Doris is always complaining that the food isn’t right. She won’t rest until she is assured that all the pasta is gluten-free, not always an easy find in Pocatello.

Nick can’t wait to get away; he insists that he and Kelly are there just for a short visit. Besides, he has promised Kelly a nice weekend in a nice place.

Nick urges Eddie to leave this town; go to Portland or Boise. After all, Eddie has a college degree and can easily get situated elsewhere. Eddie lamely informs him that his major was in Pacific Northwest history.

Troy desperately tries to hang onto his marriage, if only wife Tammy would stop drinking. And their daughter, Becky, no doubt infected by the parental friction, is ultra-neurotic. She is given to vomiting, even in public, when her digestive system rejects what most of us would consider ordinary food. A psychiatrist has found her to be bulimic, a term she absolutely rejects.

Becky can’t find anything pleasant in life and wants to escape. To anywhere but “here,” she claims.

Cole’s only problem appears to be that he is rather senile, forgivable considering his age.

Underlying the overt tension is a secret that Eddie has been concealing: The restaurant is to close the following week, and he hasn’t had the courage to inform his employees that they will soon be jobless.

When the secret finally comes out, there are understandable emotional fireworks.

At play’s end, the only remaining ally for Eddie appears to be his mother, Doris. What will happen now? We are not to know.

Under Davis McCallum’s direction, the 10-person cast more than fulfills the play’s requirements, with this world premiere production offering a fine example of ensemble playing.

Lighting by Eric Southern enhances the show, as do costumes by Jessica Pabst.