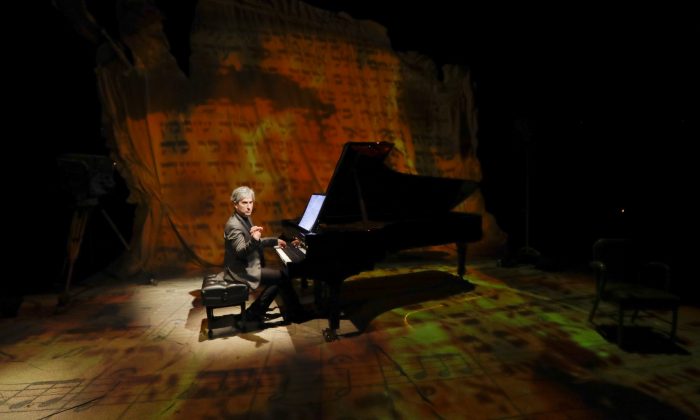 NEW YORK—The defining moment in “Maestro,” a one-person show starring Hershey Felder as Leonard Bernstein, occurs toward the end of the piece. The title character explodes in a burst of rage.

At this point, Bernstein is being forced to accept his legacy: When all of his musical accomplishments are totaled up, he will be remembered simply for being Leonard Bernstein rather than for any of the music he created.

We see the dark underside of a man tormented, for no matter how much success he achieved, his dream of being an acclaimed composer—rather than just a successful one—would never fully be realized.

It’s during moments like these, when Felder is able to get away from a standard documentary format, that the character and storytelling come alive. But overall, we want to know more about this fascinating and complex individual who, as the story suggests, gave far too much weight to what others thought, be they his mentors or society in general.

Felder, who also wrote the show and performs the music, does pepper the narrative with interesting anecdotes and opinions. Bernstein, for example, tries to convince his father of the commercial value of a musical career by citing the popularity of Yankel Gershowitz (George Gershwin). Yet later he dismisses Gershwin’s popular composition “Rhapsody in Blue” as a trivial piece.

Also highlighting his heritage, Bernstein recalls his brushes with anti-Semitism, such as when he was asked to change his name in order to remove any Jewish associations.

We see that a central tenet in the story is the connection of music, not only from a person to the sounds but also through one generation to the next.

Bernstein illustrates an example of this connection when he describes how the Jewish song his father used to sing on the Sabbath was the same tune as the last movement of Beethoven’s “Tempest” sonata.

Another moment in this regard occurs when Bernstein reveals a deep respect for the composer and anti-Semite Richard Wagner because Wagner made no apologies for who he was, thus freeing his passions to come alive in his music in a way Bernstein felt he was unable to.

Felder’s performances of the musical selections are quite enjoyable.

And we gain considerable insight into the role of the conductor. This role requires bringing a host of individual elements together in order to produce a satisfying whole. A maestro has to know every instrument as well as the temperament of each musician in the orchestra in order to bring out the maximum performance.

Yet sadly, such insights and moments of clarity don’t occur often enough. Instead, we travel on a genial journey through Bernstein’s life, as the show moves from one incident or encounter to the next without offering any potent glimpses into Bernstein or any of the other characters depicted.

In addition, most of Felder’s monologue is delivered in a monotone—whether describing his first brush with the wonder of music, or being almost sadistically cruel to his wife when explaining why he’s leaving her.

This lack of depth and habitual glossing over significant incidents in Bernstein’s life prevent the audience from getting a really clear picture of the man. We could linger, for instance, over the time when Aaron Copland told him that his compositions were not very good and that he should try a career in conducting instead.

It also would have been interesting to explore the accolades he did receive in spite of his frustrations.

Joel Zwick’s direction is adequate, and the scenic design by François-Pierre Couture works well: basically a grand piano, an old-style television camera, a chair, and a few props.

And Felder’s performances of the musical selections are quite enjoyable, including many from the Broadway shows that Bernstein worked on.

Yet these alone do not fully satisfy. With a little more focus, “Maestro” could be quite compelling, but as it stands now, it doesn’t penetrate into its subject matter nearly enough.

Judd Hollander is a Drama Desk and Outer Critics Circle Member and a reviewer for StageBuzz.com