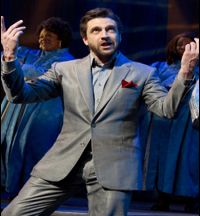 NEW YORK—In the tradition of Elmer Gantry, a revival bus broke down in a dusty Kansas town, and what could the beleaguered passengers do but “leap” into their familiar roles and attempt to instill old-fashioned religion into the hearts and souls of the townspeople? When the leader of the believers was the charismatic performer Raúl Esparza, you had an audience pleaser (although the show itself might have seemed a bit creaky at times).

Esparza, whose character was blessed with the unlikely moniker of Jonas Nightingale, was aided and abetted by a stalwart crew. There was his ever-supportive sister Sam (Kendra Kassebaum). There was his assistant and sturdy gospel choir leader Ida Mae Sturdevant (Kecia Lewis-Evans), who not only helped fill the theater with bouncy song (Broadway’s St. James Theatre served as the revival tent) but also cooked the books for Jonas.

Jonas couldn’t have survived without Ida Mae’s unwavering loyalty because she and her daughter (Krystal Joy Brown) were able to keep the choir members—Angels of Mercy, they were called—from walking out even though they hadn’t been paid in a good while.

Even Ida Mae’s son, Isaiah (Leslie Odom, Jr.), on vacation from Bible college, felt bad when he was forced to turn over the questionable books to the town’s sheriff. The plot then thickened because the sheriff just happened to be a female, the widow Marla McGowan (Jessica Phillips).

Now there’s nothing like a bit of romance to keep a stew simmering. Marla was more than a little conflicted because doing her job would require that she arrest the visiting charlatan. Lonely woman that she was, she couldn’t help but be drawn to the exotic stranger.

Besides, Marla’s 13-year-old son, Jake (Talon Ackerman), who had lost the use of his legs in an accident that killed his father, was also drawn to Jonas and felt that Jonas’s magic touch would make him walk again. Even Jonas was touched by the boy’s strong belief.

Interspersed between all the doings were the musical numbers (music by Alan Menken, lyrics by Glenn Slater) with titles such as Rise Up!, Fields of the Lord, Fox in the Henhouse (sung by Jonas and Marla), King of Sin (sung by Jonas), and Last Chance Salvation. You didn’t go out humming these but they certainly kept things rocking, ranging from intimate country ballads to rousing gospel.

Under Christopher Ashley’s direction, with choreography by Sergio Trujillo, the cast performed with to-be-expected Broadway conscientiousness.

It was ultimately Raúl Esparza’s show, and he carried it to the hilt.

Although the book by Janus Cercone and Warren Leight was a bit light—not reaching the heights of an Oklahoma or South Pacific, say—Leap of Faith was a crowd-pleaser, with many audience members claiming more than one visit to witness the charming charlatan and his entourage go through their paces.