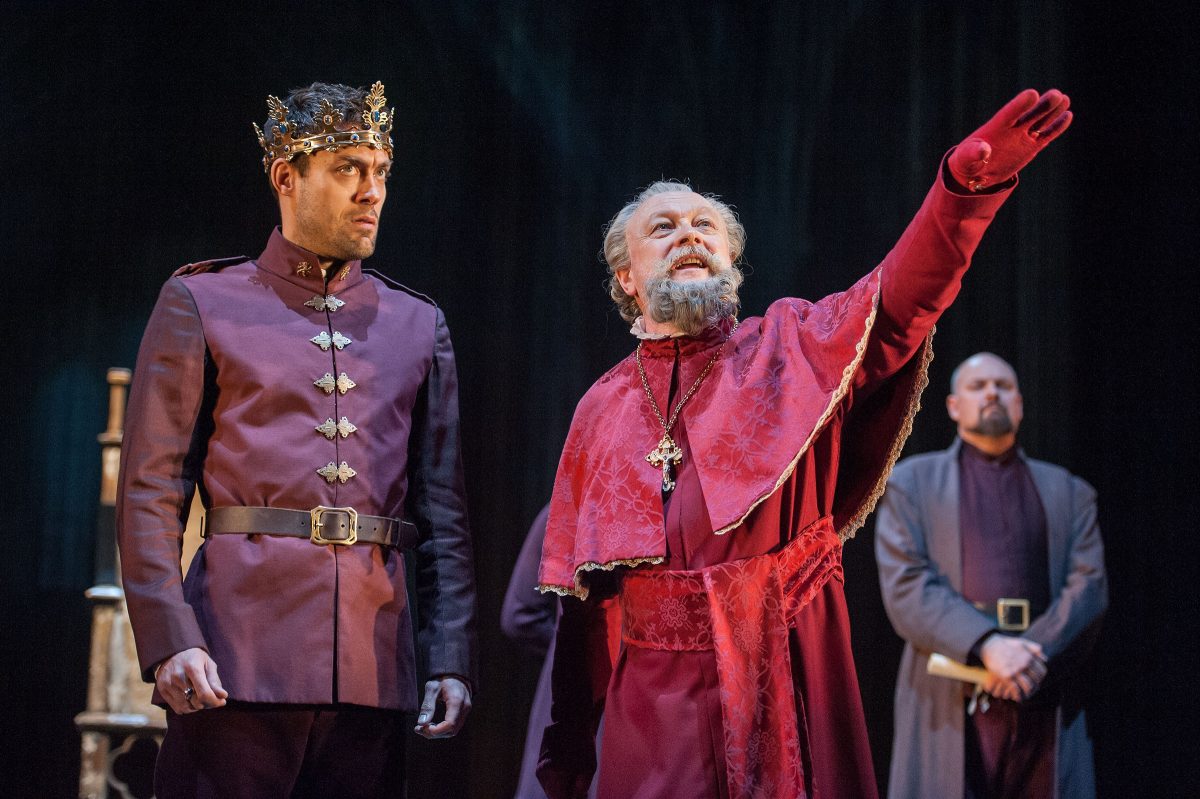 Henry V (Alex Hassell) with the Archbishop of Canterbury (Jim Hooper) in the last in the cycle of king plays at the Brooklyn Academy of Music, “Henry V.” (Stephanie Berger)
Arts & Culture

Striving to deserve the crown
BY Judd Hollander TIMEMay 1, 2016 PRINT

NEW YORK—Responsibility reveals the measure of the man. Such is the basic lesson presented in William Shakespeare’s “Henry V.” The Brooklyn Academy of Music presents the play as part of the series “King and Country: Shakespeare’s Great Cycle of Kings.”

With the death of his father, King Henry IV, Prince Hal, who is now known as Henry V (Alex Hassell), has ascended to the throne of England. A formerly wild youth whose tastes ran to drink and petty theft, he has since more than proven his valor in battle, but is still new to the politics and policies that come with being king.

Interesting elements include a warning against overconfidence.

As such, he is very carefully making plans for the future. His plans include claiming ownership of certain parts of France, a position supported by English scholars, both legal and religious. Due to French rules of land involving royal lineage, and due to Henry’s own ancient ties to France, some portions therein actually belonged to England.

However, the King of France (Simon Thorp) and his son Dauphin (Robert Gilbert) see things quite differently. With their rejection of Henry’s efforts for a diplomatic solution, war between the two countries seem inevitable.

“Henry V” presents a serious look at the facets of war, specifically the importance of knowing exactly when to fight and who to fight against. Henry is fully aware that fear and intimidation can work just as well as steel and the wholesale spilling of blood. He merely threatens the governor of a French municipality with cruelties against its people, unless the authorities surrender to him immediately.

Yet while clearly understanding of the power of mercy, Henry can also be quite unforgiving. He orders the hanging of a number of his own soldiers, including at least one of his former comrades because they have disobeyed his orders not to loot a town that has surrendered to him.

He also sentences several French prisoners to death in retaliation for the French army committing a bloody atrocity against the English forces.

While Henry is striving to leave his own mark, he’s also trying to absolve himself of the actions committed by his father. Henry IV rose to power by usurping the throne of King Richard II.

By honoring Richard in death, Henry V tries to make amends in the hopes it will help end the strife that continues at home. For this reason Henry’s forces are outnumbered in France; he had to leave a good part of his army in England to defend his throne against the unrest that still simmers there.

Other interesting elements include a warning against overconfidence, as well as making clear the idea of who does the fighting and who takes credit for it. In a pointed bit of irony, when the names of those who have fallen in a major battle are read aloud, only those of noble birth are mentioned individually. The rest are simply lumped together as people of no significance; yet they were all instrumental to the victory.

This irony is further compounded by an earlier point—that a leader is only as strong as those who will fight for him. Henry learned this lesson all too well when he went among his soldiers in disguise the night before the battle began.

The entire cast is excellent. Chief among them are Hassell as Henry V, who plays not only a maturing king, but also one who knows he is flawed. He is often filled with doubts and insecurities, be it when leading his troops into battle or when wooing the King of France’s daughter (Jennifer Kirby).

Other standouts include Gilbert as the arrogant and almost foppish Dauphin—one of the chief instigators against Henry and firmly convinced of his family’s right to rule and of their having the forces to keep it so.

Also worthy of note is Thorp as the King of France. He never loses his air of nobility or gravitas, no matter the circumstances.

Gregory Doran’s direction of this play is particularly strong, especially the scene when Henry rallies his troops as they prepare to fight against seemingly impossible odds while yet comforted in the knowledge that a greater power than their own will ultimately decide the outcome.

This particular production is a stirring testament to the responsibly that comes with the crown.

Often thought of in connection with other plays in this particular Shakespearean history cycle (“Richard II,” and “Henry IV,” Part 1 and Part 2 among them), “Henry V” stands on its own merits.

This particular production is a stirring testament to the responsibly that comes with the crown, as well as the need to continue to earn the respect of those who allow themselves to be ruled by the one who calls himself king.