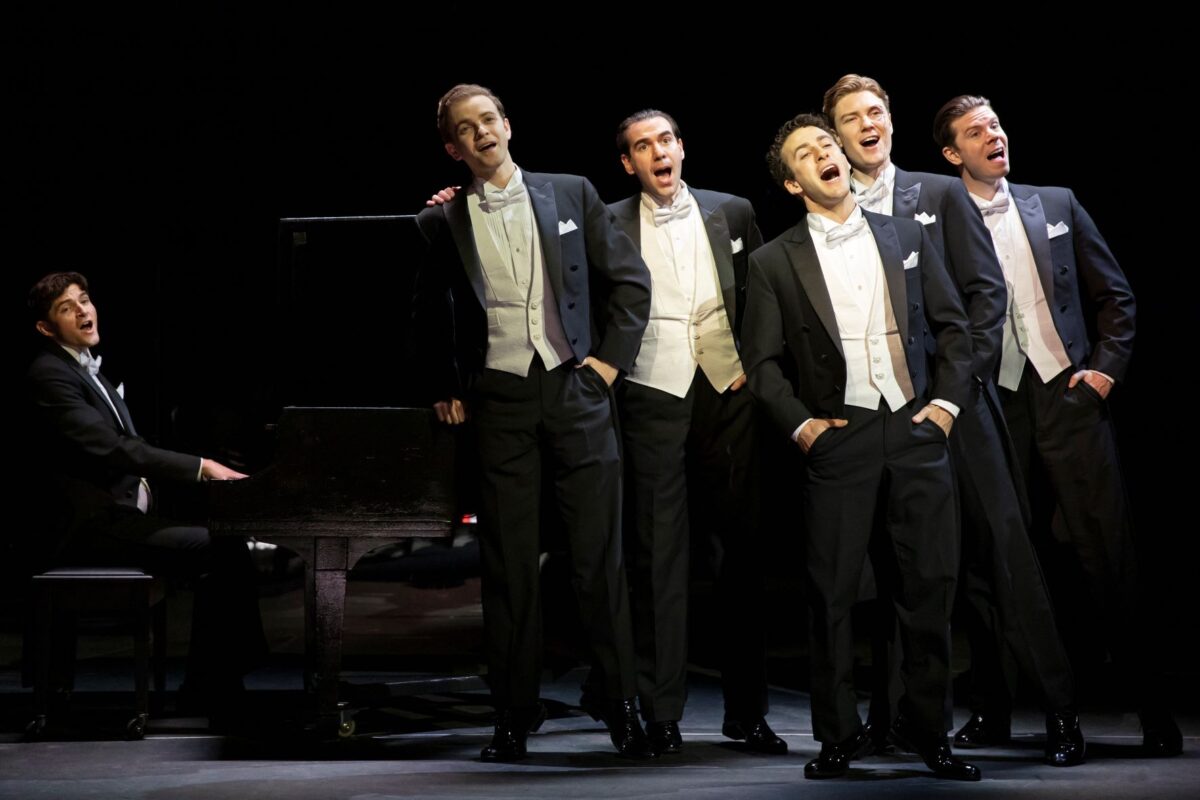 The true test of friendship
BY Judd Hollander TIMEApril 30, 2022 PRINT

NEW YORK—Real friendship can serve as a source of strength and possibility, even as the world seems to be falling apart. So it is with the National Yiddish Theatre Folksbiene’s deeply stirring production of “Harmony,” which tells the story of one of the most popular singing groups in the first part of the 20th century.

In 1927, Germany was still reeling from the aftermath of the World War I and going through a recession where “a wheelbarrow of money bought a slice of cheese.” The country was also rife with protest, as different political factions jockeyed for attention on street corners and in the corridors of government.

It was in this environment that six young men come together to form a musical singing group. The members consist of Harry (Matthew Mucha subbing for Zal Owen the day I saw the show), a musical arranger; Lesh (Steven Telsey), a Bulgarian waiter; Erich (Eric Peters), a medical student who can’t stand the sight of blood; a piano player nicknamed “Chopin” (Blake Roman); Bobby (Sean Bell), a comic opera singer; and a young man from Poland known as “Rabbi” (Danny Kornfeld), the profession for which he was originally trained.

Performing on subways and in nightclubs, the group’s unique blend of singing, dancing, and comedy, the latter added by accident and desperation, begins to attract notice. Known professionally as “The Comedian Harmonists” and, thanks to their first big break through a person with influence (Chip Zien), they quickly become the toast of all Germany, then Europe, and beyond.

The story begins on the stage of Carnegie Hall where the Harmonists make their New York debut in 1933. Their story is narrated by the now-aged Rabbi (Zien), the last surviving member of the group. Although no one knew it at the time, this performance was also the beginning of the end, due the rise of the Nazi Party in Germany, and the fact that several of the Harmonists were Jewish.

One problem with ensemble pieces is that some of the characters can get lost in the shuffle. Fortunately, that is not the case here, as each of the Harmonists have their own distinctive personality.

In addition, enough of their histories are revealed to allow the audience to see them as clearly drawn individuals. We care about what happens to them, such as Chopin, who likes to think of himself as a sort of rebel yet is actually too willing to go along to get along. This is something which enrages his Jewish wife Ruth (Jessie Davidson), who refuses to bow to the new German order.

There’s also Erich with his own secret to hide (two, in fact) and Harry, the leader of the group, who brings them all together. It also helps that the show’s creators, Barry Manilow (music) and Bruce Sussman (book and lyrics), have a deep understanding of the material, having worked on the project for more than 25 years.

At the core of this tale is the friendship and respect the Harmonists have for each other and, eventually, the need to protect those among them most in danger. It’s also one of the reasons they accept an offer, an ultimatum really, to become cultural “ambassadors” for the Nazi regime. Yet once they do, they proceed to bitterly satirize Nazis in their performances outside of Germany, as shown in the biting number “Come to the Fatherland.”

History From a Distance

Also present is the idea of how things could have changed if different actions were taken. Much of this comes via the benefit of hindsight as the elder Rabbi recalls past decisions he now wholeheartedly regrets. This ability to look at history from a distance is also visible in audience reactions when some of the characters make comments of how what is going on in Germany will soon “blow over.”

At other points this premise is dealt with on a much more optimistic and hopeful note, as when Young Rabbi (Kornfeld) and his girlfriend Mary (Sierra Boggess) debate their future should they decide to marry, a sequence beautifully explored through the song “This Is Our Time.” This youthful exuberance is also explored early on when we see a band of determined protestors, Ruth among them, as they put forth their own ideas for a better Germany.

Special Praise for the Narrator

While the entire cast is excellent, with Davidson, Boggess, Roman, and Kornfeld among the standouts, special praise must go to Zien who brilliantly conveys both the joy and sorrow of the Harmonists’ story, from its humble beginnings to its denouement. Zien also effectively takes on a multitude of roles during the play, among them, Marlene Dietrich and Albert Einstein, all of whom intersect with the Harmonists at some point in their history.

Choreography by Warren Carlyle is quite good. Particularly affecting is the first time we see the Harmonists dancing together as the men change from individual performers into a cohesive whole.

Highlights from the score, in addition to those already mentioned, include the comic “Lost In the Shadows” and “How Can I Serve You Madame?”; the jazzy “We’re Goin’ Loco!” which envisions a collaboration with Josephine Baker (Ana Hoffman) at the Ziegfeld Follies; and the haunting “Where You Go,” as Ruth, Mary, and their respective spouses try to determine their options for the future.

A few of the numbers are a bit over-miked, especially in the beginning, but the sound soon evens out to a nice balance. The set design by Beowulf Boritt is also very effective, with elements of art deco often visible.

“Harmony” powerfully brings to life a story about a once-acclaimed singing group whose members forged a bond of friendship that would never be broken, no matter the circumstances.