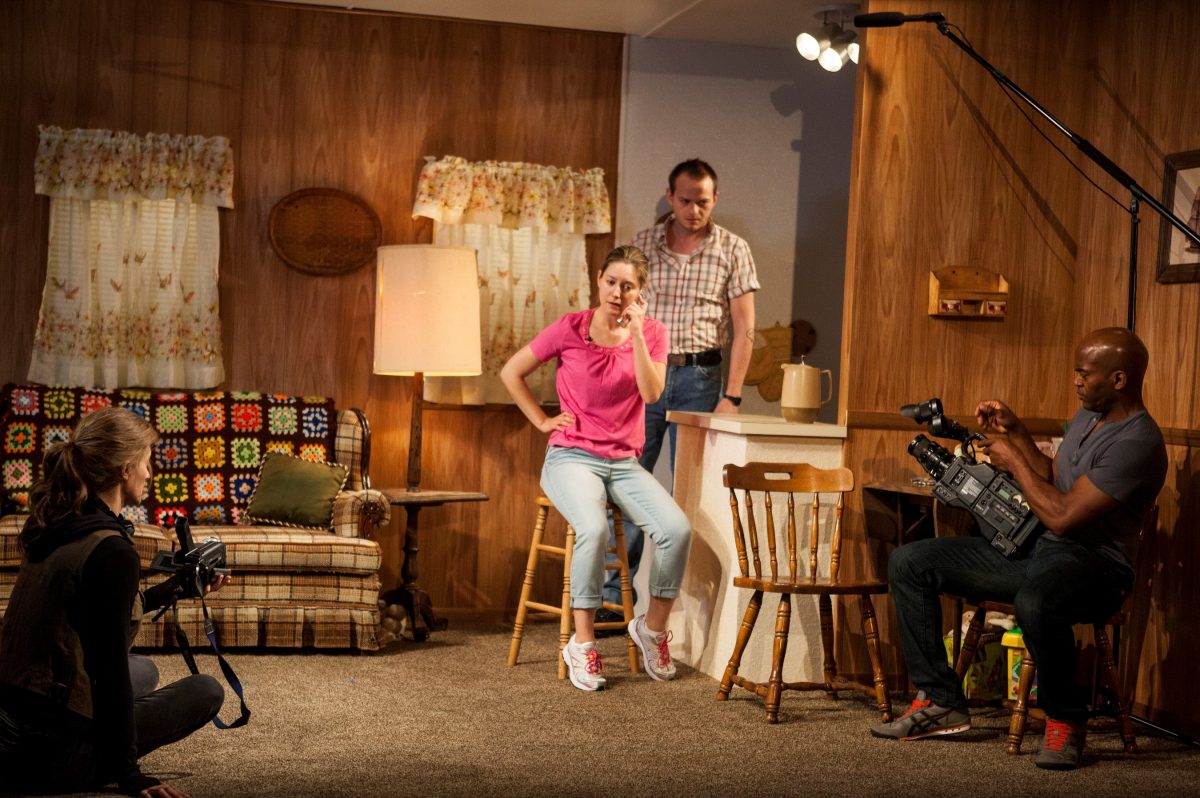 Reality gets in the way of fantasy
BY Judd Hollander TIMEJune 13, 2013 PRINT

NEW YORK—In a reality show, the lines can blur between what’s good for those participating in the program and the network bottom line. This point is brilliantly brought home in Rob McLachlan’s Good Television, now at the Atlantic Theater Company’s Stage 2.

Connie (Kelly McAndrew) is the producer of “Rehabilitation,” a reality series focusing on helping drug addicts and a show with an abnormally high recovery rate among those profiled.

A recovering addict herself, Connie is very careful when it comes to selecting those they feature. However, with the network increasing the number of episodes they have to film each season, that type of care may no longer be possible—especially when Connie’s boss Bernice (Talia Balsam) explains the need to feature addicts who are a bit more telegenic than the ones they’ve previously been showing.

A case in point is Clemson MacAddy (John Magaro), a teenage methadone addict from South Carolina. Connie has her doubts about using him on the show, pointing out that for things to go as they hope, the entire family of the person involved must be on the same page with the program’s intentions. Yet, after talking to both Clemson’s sister, Brittany (Zoe Perry), and his elder brother, Mackson (Luke Robertson), Connie is not sure they agree.

At the same time, Connie finds her own position of power threatened in the form of a new associate producer named Tara (Jessica Cummings). Tara wants to help every addict they can, regardless of how it might look on the show.

In addition, Ethan (Andrew Stewart-Jones), who’s about to take over Bernice’s job, has his own ideas of how the program should be run.

McLachlan, making his off-Broadway playwriting debut, definitely has a good feel for reality TV. He offers situations that would play wonderfully on any number of intervention shows, with emotional explosions and hidden revelations from Clemson’s family and elsewhere coming thick and fast.

What’s also interesting is that each of the characters on the “Rehabilitation” team offers a strong argument for their particular point of view, but all of them conflict in one way or another with the actual purpose of the program—that being to get help for the addict of the week.

Tightly directed by Bob Krakower, the various scenes unfold sharply with a pivotal segment in Act 2 feeling like an intense ballet. The camera crew tries to keep up with the various characters as tempers erupt on both an emotional and physical level.

The script also offers several scenes toward the end, each of which could be used to conclude the play, but which combine to tie everything together in a satisfying and not at all contrived way.

McAndrew is great as Connie, a tightly wound person battling her own personal demons, while trying to maintain her equilibrium. She ultimately realizes that it’s not only helping people that’s important, but just trying is important.

Balsam does well as Bernice, the levelheaded but sarcastic showrunner of the program. Cummings is very good as Tara, an idealistic sort wanting to save the world or at least make her mark in it, but who in the end winds up becoming more of a realist.

Perry is excellent as Brittany, a woman looking frantically for anything that can fix the dysfunctional morass her family has become. Magaro nicely brings Clemson to life, an individual who demonstrates a desperate need to hide from the pain he’s carrying inside.

Stewart-Jones works well as Ethan, an enthusiastic type trying to fit into his new situation so he can take control of the process. Robertson does a nice turn as Mackson, someone who may have his own agenda in Clemson’s story, and who finds out, as does Connie and Brittany, that sometimes no supposed good deed goes unpunished.

The set by Eric Southern works well, with his creation of Brittany’s living room being spot on in terms of the atmosphere and sense of place the show is looking to present.

Strongly written, well-acted and riveting, “Good Television” takes great pains to remind the audience that in reality television, it’s the word “reality” that comes first, with all the consequences that go with it.

Also in the cast is Ned Van Zandt.