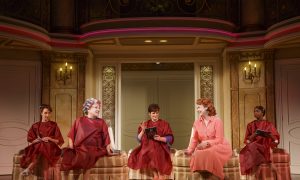 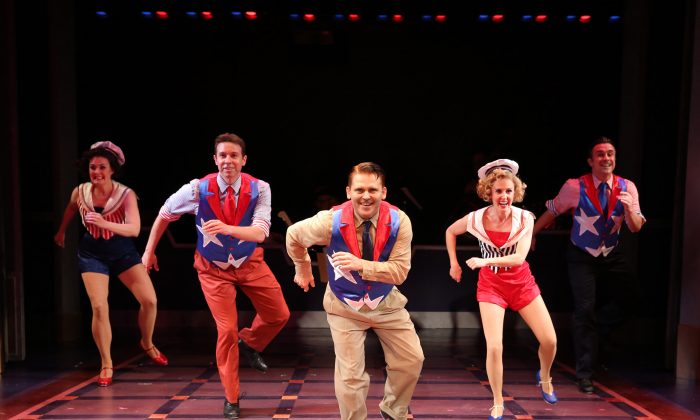 (L–R) Danette Holden, Jeremy Benton, Robert Creighton as the legendary James Cagney, Ellen Zolezzi and Josh Walden tapping up a storm in a musical that pays as much homage to tap as to the title’s namesake. (Carol Rosegg)
Arts & Culture

NEW YORK—This musical about the life of movie superstar James Cagney was a labor of love for performer Robert Creighton. He made a study of Cagney for years and came up with this credible version of the star’s life.

Furthermore, Creighton wrote some of the songs—the others are by Christopher McGovern and no less a personage than George M. Cohan.

He later makes it into vaudeville where he met the love of his life, fellow performer Frances Willard Vernon. Called Willie in the show, she is well-played by Ellen Zolezzi and is a wonderful tap-dancer.

After giving a terrific performance in a Broadway show, Cagney is noticed and lured to Hollywood by powerful movie producer Jack Warner (Bruce Sabath) of Warner Bros.

Warner puts Cagney into a series of movies that make Cagney a major star—and lots of money for Warner Bros. Since the tough guy image is selling well to the public, Jack Warner is loath to let his star escape it.

Cagney wants to play roles that are ennobling and make films that convey a profound message. Unfortunately, when Cagney goes out on his own as a producer, he is a resounding failure. But Cagney ultimately hits the mark with his Oscar-winning performance in the movie “Yankee Doodle Dandy.”

It’s a joy when the “Cagney” dancing cast of only five taps their way into one’s heart with song/tap renditions of “You’re a Grand Old Flag” and “Give My Regards to Broadway.”

Creighton handily anchors the show with his performance and mannerisms, so close to the “real McCoy” of James Cagney. He bears a reasonable resemblance to the late star, and when he breaks into a tap dance (terrific choreography by Joshua Bergasse), you can’t help but be won over.

Even if you’re not already a fan of this rhythmic form of dance, this show should bring you into the fold.

Much of the plotline is taken up with the at-odds relationship of Cagney and Warner, with actor Sabath’s portrayal of a ruthless producer supplying a fine foil for Creighton.

Another section of the script shows Cagney falsely accused of having communist ties by the Dies Committee, which preceded the House Un-American Activities Committee.

Others in the cast are Danette Holden, Jeremy Benton, and Josh Walden, with Walden performing a particularly fine solo.

Theater Review: ‘It Shoulda Been You’
To my mind, the show has possibilities for expansion in terms of the complexity of the writing. And wouldn’t it be exciting to see a really large cast of dancers tapping their way across a larger stage? What heavenly rhythms to see and sense!

According to its website, The York Theatre Company is the only theater company in New York City, and one of the few in the world, dedicated to developing and fully producing new musicals and preserving neglected, notable shows from the past.

The York can readily view this production of “Cagney” as another feather in its producing cap.

Diana Barth publishes New Millennium, an arts publication. She may be contacted at DiaBarth@juno.com