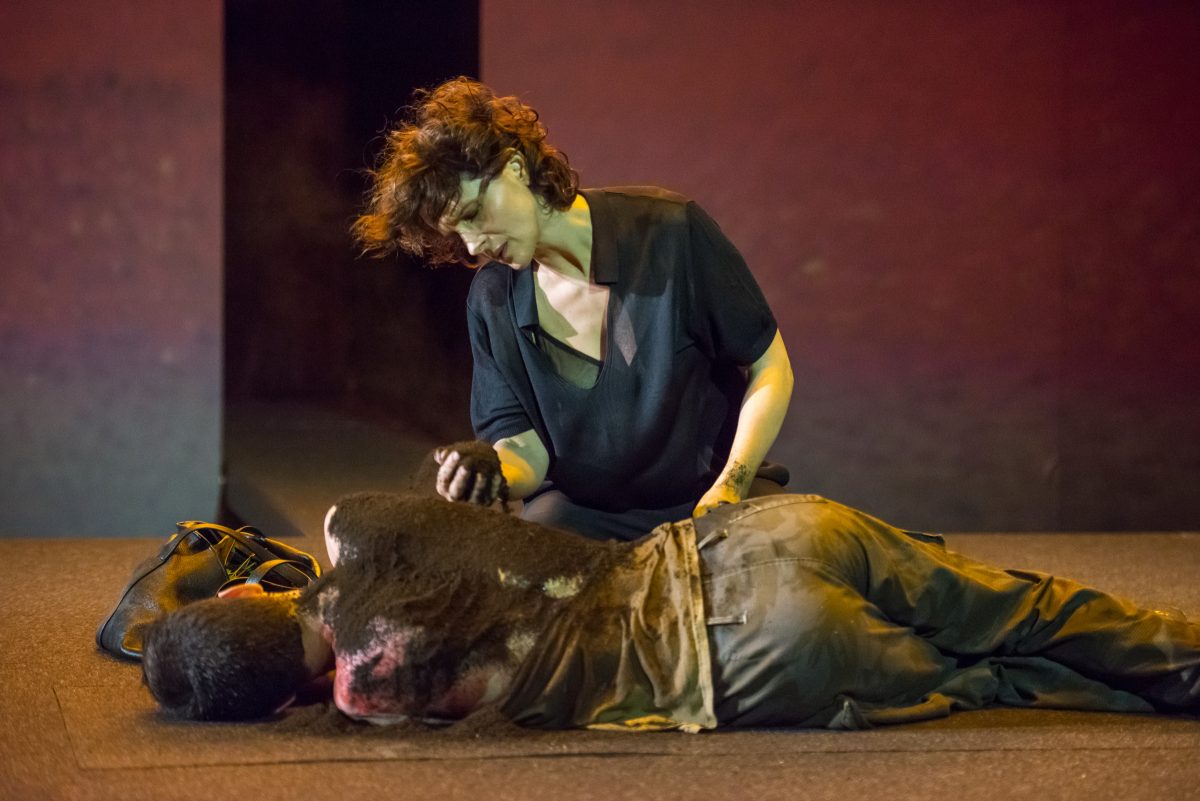 Antigone (Juliette Binoche) giving her brother burial rites, although forbid to do so by her uncle the king. What is the price for doing what one believes to be right? (Stephanie Berger)
Arts & Culture

NEW YORK—Stark, severe, uncompromising, dark—these are the qualities imbued by director Ivo van Hove into his production of “Antigone,” translated by Anne Carson in a new version of Sophokles’s classic play.

Set in Thebes, Antigone (Juliette Binoche) is a royal person with a dark past, daughter of the self-blinded Oidipous. Now, she is faced with a terrible dilemma in which she has decided to break the law established by her uncle, King Kreon of Thebes (Patrick O’Kane).

This law decrees that Antigone’s brother, Polyneikes, killed in battle, may not be granted the rites of proper burial, for according to Kreon, Polyneikes is a traitor to the state. Proper burial is a matter of human rights, Binoche has commented in an interview.

And to Kreon, the rule of law, loyalty to the state, comes first and foremost. In the play he says, “If a man puts family or friend ahead of fatherland, I count him absolutely good for nothing.”

But to Antigone, loyalty to family and family ideals are more important. She thus decides to perform the burial rite for her brother, even knowing that she will be condemned to death by the king, her uncle.

Antigone asks her sister Ismene (Kirsty Bushell) to perform the burial rites with her. But Ismene insists that nothing Antigone does will change anything, and she fears invoking Kreon’s wrath. Antigone, disgusted with Ismene, leaves her.

When the Guard (Obi Abili) enters and informs Kreon that he has seen Antigone perform the outlawed rites of burying Poyneikes, the die is set. In a searing scene, both antagonists, Kreon and Antigone, express their opposing views, and Kreon insists on the death sentence for Antigone. He further emphasizes that he “won’t be bested by a woman.”

Antigone, feeling her stance is right, says, “A husband or a child can be replaced; but you can’t grow a new brother.”

Kreon’s son, Haimon (Samuel Edward-Cook), who is engaged to be married to Antigone, opposes Kreon, saying that his stance is inflexible and unfair. Finally, insisting that Antigone should not die, Haimon leaves in anger.

The Chorus (Abili, Bushell, Finbar Lynch, and Kathryn Pogson), who voices its views on the events, at first sides against Antigone. But after the blind seer Teiresias (Finbar Lynch) enters and speaks, the Chorus changes its views.

Teiresias points out to Kreon that he is following a dangerous path, that he must learn to take people’s needs into consideration, and that his present path will only lead to disaster. Kreon is exercising bad judgment.

Finally persuaded, Kreon vows to change his tactics, but he is too late. All his loved ones are now dead, by their own hand: Antigone, Haimon, and Kreon’s wife, Eurydike (Kathryn Pogson). The Chorus comments: “You’re late to learn what’s right, aren’t you?”

And over all hovers set designer Jan Versweyveld’s enormous circle on the back wall, which sometimes encases stark moonlike white or deep red, as in a sunset (or a raging war), or is empty.

Juliette Binoche, a renowned film actress, who is less known for her theater experience, has however played featured roles both in London and on Broadway. Arguably, she does herself a disservice by tending to shout her most emotional passages, thereby lessening rather than maximizing their effectiveness. However, she is a most attractive figure onstage, exuding a highly individualistic kind of magnetism.

Ivo van Hove, general director of the Toneelgroep Amsterdam since 2001, is noted for his many award-winning productions worldwide, including several at BAM.

Van Hove commented in the program notes that the right for proper burial was illustrated recently in the tragedy of Malaysia Airlines Flight 17, shot down over a Ukrainian war zone. The victims were left rotting in an open field for over a week, seen as an act of barbarism worldwide. Finally the Dutch government arranged for a transfer of the bodies for a proper burial.