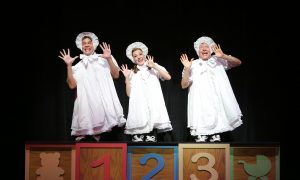 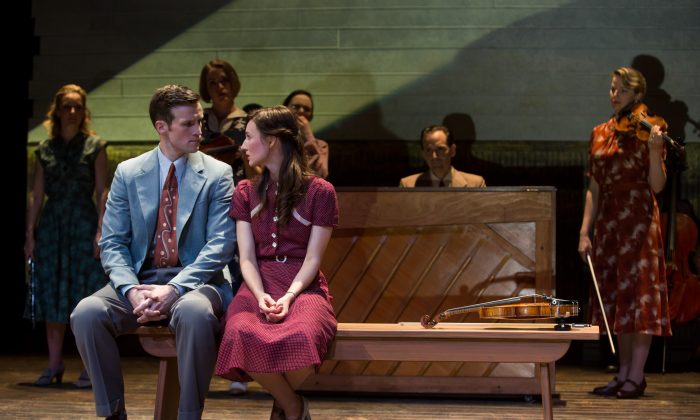 Solid production, but something missing
By Judd Hollander
biggersmaller
Print

NEW YORK—Classic Stage Company offers an interesting treat with their production of the rarely seen 1947 musical Allegro (music by Richard Rodgers, book and lyrics by Oscar Hammerstein II). While the score is delightful and the situations presented universal, the show suffers from a gaping hole in its heart, which prevents it from really taking hold.

Starting in 1905 and spanning an approximate 40-year period, the story follows the life of Joseph Taylor Jr. (Claybourne Elder). The son of a small-town doctor, he dreams of following in his father’s footsteps.

After a relatively normal upbringing, one filled with small triumphs and large losses such as the passing of his grandmother (Alma Cuervo), Joseph heads off to college where he makes a friend in fellow doctor-to-be Charlie Townsend (George Abud). However, Joseph continually pines for home and his childhood friend Jenny Brinker (Elizabeth A. Davis), whom he plans to marry.

But Jenny, the only child of a rich father, doesn’t relish being a doctor’s wife in a town where options for advancement are rather limited. When her attempts to get Joseph to join her father’s business fail, she instead pushes him to accept a medical partnership in Chicago, despite the fact that it means leaving his father and the people he has treated since receiving his own license to practice.

Ironically, it will be Joseph who succeeds, while Jenny’s father, who was heavily involved in the stock market, loses everything after the crash of 1929.

Soon Joseph is ensconced in Chicago in a powerful medical practice, while hobnobbing with the city’s elite. However, he becomes so busy climbing the social ladder that he forgets why he became a doctor in the first place—at least until Emily (Jane Pfitsch), a nurse working in the practice, reminds him.

This incident is one of several that eventually lead Joseph to a crisis of conscience where he must decide the future direction of his life.

The early part of the show is clearly the strongest, showing Joseph as a young boy learning to walk, equating his father’s doctor bag with his dad’s frequent departures, and his eventual realization that his parents are more than just his mom and dad.

Joseph’s courtship with Jenny is also well-handled, and one can feel strong chemistry between the characters as they declare their love for each other.

The score is a joy to hear, much of it sung by the ensemble members of the cast in a Greek chorus manner. Some of the highlights include “Winters Go By,” a piece used to illustrate the passage of time; the biting “Money Isn’t Everything”; the gentle “A Fellow Needs a Girl,” sung from both the man’s and woman’s point of view; and the title tune.

Unfortunately, the various characters get lost in the story’s message. This is especially true with Jenny, who eventually ceases to resemble anything close to flesh and blood and finally drops out of the story altogether. Her absence deprives the tale of a love triangle, at least one major confrontational scene, and most importantly, the chance to follow her overall development arc.

It also doesn’t help that neither Charlie nor Emily are ever fully developed, though Pfitsch does good work with the song “The Gentleman is a Dope” as she tries to come to terms with her feelings for Joseph.

Another problem is that Elder, while okay as Joseph, is never really able to make the character stand out. While many of his situations are certainly relatable to an audience—like being caught between the wishes of his mother and his girlfriend—Elder fails to make a strong impression in the role, and thus Joseph doesn’t come off as appealing or sympathetic as he should.

Davis does far better with Jenny, the most interesting character in the piece. Davis shows her to be a woman determined to get what she wants. Her chameleon talents are on display with methods that are cute at first, such as trying to make Joe jealous when he goes away to college. But eventually they become more sinister, as when she and Joseph’s mom finally face off over his future.

The rest of the cast, many of whom play multiple roles, are fine. Abud is great fun as Charlie, a cynical playboy type, while Pfitsch strikes the right note as Emily. Malcolm Gets and Jessica Tyler Wright work well as Joseph’s parents, although the sudden demise of Wright’s character deprives the show of an important emotional anchor.

Cuervo is nicely earthy as Joseph’s grandmother and also does an amusing turn as a wealthy woman determined to punish her philandering husband. Other good performances include Megan Loomis as Beulah, a girl Joe meets at college, and Pfitsch as Molly, one of Charlie’s many girlfriends.

Direction by John Doyle is OK; his now-familiar trick of having the actors also play musical instruments fits in well here. The cast, Davis in particular, are adept at letting their emotions show during this process. But Doyle is ultimately unable to make the performances rise above the problems in the text.

Despite having some strong elements, “Allegro” falls short because of its overemphasis on the dangers that power, money, and social climbing can bring, rather than focusing on the human factor in this equation.