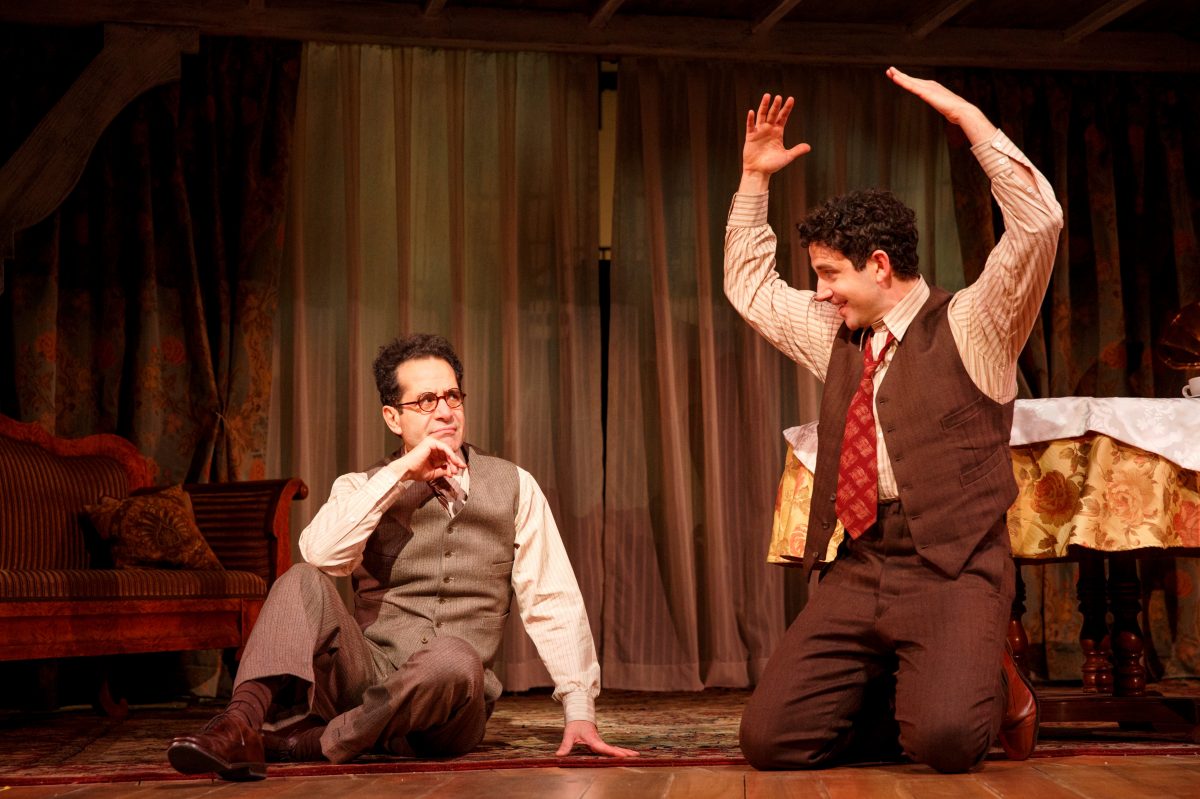 Rags to riches: story of a theater man
BY Diana Barth TIMEMay 1, 2014 PRINT

NEW YORK—All the stops have been pulled out to disclose the elegant resources of the Vivian Beaumont Theater at Lincoln Center. To do service to playwright/director James Lapine’s Act One (Lapine’s stage version of the late Moss Hart’s eponymous autobiography), the set by Beowulf Boritt features turntables, stairs, a multitude of rooms, and offices, including the shabby early Bronx home of Hart, where his family had had to take in boarders to make ends meet.

The large, appealing cast makes good use of the environment as the early story of legendary playwright/director Moss Hart is unreeled. Matthew Schechter plays him as a young boy, the vibrant Santino Fontana as the youth who fights his way into his beloved and highly successful theatrical career, and Tony Shalhoub is the elder Hart looking back on his life.

Plagued by poverty as a youth, Hart (Santino Fontana) longs for a way out. His affectionate Aunt Kate (Andrea Martin), a theater buff herself, imbues her nephew with a love for the theater.

Wanting to participate in any way possible, Hart luckily lands a job as office boy to Broadway producer Augustus Pitou (Will LeBow). When Pitou suddenly has a need for a new play, Hart manages to write one within days. It’s not the greatest, but it is the initial seed for what will become a major career for Moss Hart.

Some of his later successes include You Can’t Take It With You, and The Man Who Came to Dinner, both written in collaboration with George S. Kaufman. He directed My Fair Lady, the phenomenal hit by Lerner and Loewe, which ran on Broadway for six years, to name but a few remarkable successes.

The heart of this play is the first collaboration between Moss Hart and the much older and very successful playwright George S. Kaufman on Once in a Lifetime. There appeared to be great mutual admiration between the older man and the eager neophyte.

Tony Shalhoub’s rich characterization as Kaufman indicates extreme shyness and odd peculiarities, such as frequent washing of his hands, but at the same time endowing the character with warmth and a great respect for his younger partner.

Santino Fontana, who recently performed Prince Charming in the present run of Cinderella on Broadway, always plays at high energy, and with, of course, charm.

The Kaufman and Hart scenes endeavor to get at the nitty-gritty of writing and revising a play—not easy work. In one scene, a trio of actors is briefly highlighted to enact and re-enact an idea the two men are working on. In other words, they’re making their idea visibly tangible—a funny and intriguing conceit.

Andrea Martin makes an elegant appearance doubling as Beatrice Kaufman, George’s wife. Her support and compliments to Hart help him weather the storms of criticism, which sometimes greet the tryout performances of Once in a Lifetime. (Martin also does a fine triple as feisty agent Frieda Fishbein, who knows where one can get a good drink in Philadelphia.)

At two hours and forty minutes, the play feels overly long, and one may sympathize with playwright Lapine in his arguably painful decisions for what to omit of Hart’s marvelous memoir.

Lapine’s theatrical version of Act One is to be cherished for its unalloyed depiction and appreciation of The Theater, which, in spite of threats to the contrary, will go on for as long as human beings exist and will want to hear a good and moving story told by live actors.