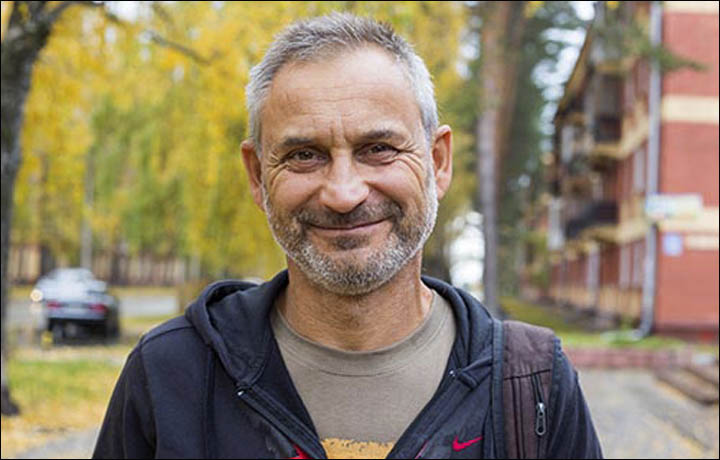 Dmitry Shchitov, 56: “It was like a test drive of my new approach to medicine.” (Vera Salnitskaya)
Health

From The Siberian Times: It is one of the world’s most dangerous places, with sheer drops, vertical slopes, and the constant risk of avalanche. Located on the eastern side of Belukha Mountain, Butylochka glacier—”The Bottle Neck,” in English—has been described as “impossible” to ski. Yet it is here, in the heart of this remote Siberian ice field, that one man incredibly came to relax.

At first glance, Dmitry Shchitov appears every bit the typical adrenaline junky, dicing with death on terrifying 80-degree slopes. But instead, he views his daredevil actions as nothing more than a hobby and a way to unwind from the pressures of the past.

Now 56 years old, he spent a decade working as an oncologist in Kemerovo, Russia, before suffering from stress and other health issues.

“When I was about 30, I got serious problems,” he said. “I had a lot of stress at work, which I helped to relieve by playing football. Whatever the weather, we played for several hours.

“But then I tore my meniscus, so I couldn’t play anymore and my health was getting worse and worse. I was so young, yet I was getting really sick. I had problems with my arms and legs, and at some point all these health issues got to me and I thought the time had come to change it all.”

Shchitov took up a chiropractic course at the Novokuznetsk Institute for Advanced Studies and met doctors “with sparks in their eyes,” who helped kindle a desire to change his life.

“I wanted to be like them,” he said. “And by studying there, I realized that there was a way to repair my own health. I realized that when a person gets sick, he or she needs to understand what he or she is doing wrong and change it. Usually, it means changing the whole lifestyle.”

Deciding to become the first person in the world to tackle the sheer slopes of the Bottle Neck glacier was his way to begin conquering his stress and transforming his health.

The highest peak of the Altai Mountains in Russia, Belukha is part of the World Heritage Site and stands at almost 15,000 feet in elevation.

Shchitov spent a great deal of time honing his skiing skills before attempting the one-kilometer-long (0.6-mile-long) descent on the glacier, which is sandwiched between rocks on both sides like a bottle neck.

After it was accomplished, and recorded on camera, Shchitov said he never looked back, and his health has been revitalized.

He said: “It was like a test drive of my new approach to medicine, which was all about believing that a lot, if not all, diseases come from negative emotions like fear, anger, stress, and also an unhealthy lifestyle.

“The ride was needed, first of all for myself to prove that I was right, and then to share my experience with others. The slope, as you look at it, seems to be absolutely vertical, but as you look at it closely you realize that there are bits that have a gradient, with little ledges you can cling to.

“The video we made isn’t the best quality. But, in fact, it’s quite a miracle we made it, since the choice of equipment was not as rich as it is now. Now, if I was to have something like a GoPro, I would have filmed a lot of very interesting moments, like one when you almost fly down and there is a near-vertical ice floe in front of you, with nanoseconds to decide how exactly to jump over it.”

Another reason Shchitov decided to ski the “impossible” glacier was to show mountain climbers how to adapt their equipment to get down slopes in a faster and safer way.

He had shortened his skis by one meter and then changed them to look more like skates to deal with the icy surface for his daring downhill. His descent down the Bottle Neck took only an hour and a half, while climbers would likely have spent half a day on the same route.

“When you go down such a slope, you don’t think speed or style—you think survival,” he said. “I had no fear. There were certainly physical and psychological tensions, but I wasn’t scared.”

And as for his stress? “I proved that I could work with my emotions and get rid of fear.” And, he insists, so can others.