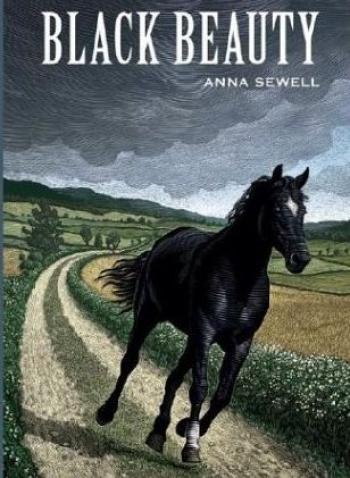 BY Sharon Kilarski TIMEAugust 15, 2010 PRINT
I can think of little fiction that has done as much good in the world (with the exception of Uncle’s Tom Cabin) as Anna Sewell’s Black Beauty. Although it was not written for children, the 1877 classic that presents the autobiography of a horse, was wildly popular immediately and soon endeared itself to families everywhere. My 1905 copy has “From Mama to Adele, Dec. 25th 1909,” handwritten on the first blank sheet.

Sewell’s actual purpose for writing Black Beauty was to encourage the humane treatment of horses.

Told by Black Beauty himself, the tale chronicles, from colthood to old age, the life of a very worthy and kindly spirit, who sees all with sympathy. He especially notes the kindness or cruelty received from various masters, and makes clear the abusive practices of the day (the harshness of checkreins to hold a horse’s head unnaturally high, the use of blinders, etc.).

Two of Beauty’s closest friends show horses with different temperaments. Ginger—named not only for her chestnut color but also for her inclination to bite—demonstrates how poor management early in life can damage a horse. Merrylegs, a white pony, is good to all and has a happier end than Ginger does.

Black Beauty makes it clear that a horse will give all he has for his master, for unlike a mule, it does not have such a strong inclination for self-preservation. One thrilling passage tells how he saved the life of his master’s wife by running at a reckless speed for a doctor, for a very a long distance. Then, unluckily, he is not properly cared for by a well-meaning but ignorant boy. As a result Beauty almost dies himself.

Most interesting is the overall course of Beauty’s life—moving on a decline after a promising start, due to his good looks and mild temperament, he starts out in a wealthy family’s stable; from there he moves to work for a cabbie, a much harder life where he toils night and day. After this, he carts heavy loads until he is worn to almost nothing. Finally, he has a well-earned rest in old age, bought by a former beloved master who accidentally discovers him for sale.

Of course, this tale describes how humans treat each other as much as it does how humans treat or mistreat animals. One of Beauty’s kind masters, Jerry, runs a cab. One bitter winter night, despite a cold, Jerry is called to carry revelers to a party and asked to wait outside. Both cabbie and horse stand for hours in the sleeting rain. Jerry falls dangerously ill after that; and so Beauty loses another good master.

Since it is only in children’s literature today that we indulge ourselves in feeling sympathy for fellow creatures, these kinds of books are crucial to our education; do not fail to get your child a copy.

As chapter 13 closes, it reads:

"There is no religion without love, and people may talk as much as they like about their religion, but if it does not teach them to be good and kind to other animals as well as humans, it is all a sham."