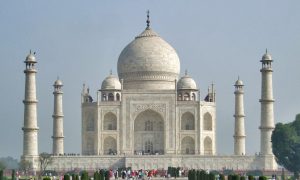 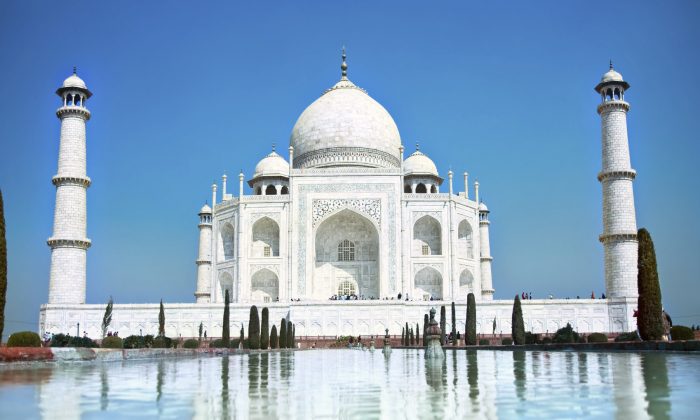 The Taj Mahal, a True Masterpiece

Next week, I’m going on another business trip to India. Although I will have no time whatsoever during this trip to visit anything, it does remind me of the fact that I have been able to visit the world-famous Taj Mahal already twice. Unfortunately up till now I never had the time to write about it. Both visits I stared for hours at this awe-inspiring wonder. It is impossible to describe the beauty of this famous marble mausoleum, you have to see it for yourself and I’m sure that you – just like I do – will cherish the memories for ever.

The Taj Mahal, known for its magnificent white marble dome, is one the new 7 Wonders of the World and is located in Agra, India. The Taj Mahal – attracting millions of tourists a year – is world-wide admired as an artistic and architectural masterpiece.

The construction of the Taj began in 1632 under the Mughal emperor Shah Jahan. The dome itself is actually a mausoleum built by the broken hearted Shah Jahan for his third wife, Mumtaz Mahal, who died in 1631. Shah Jahan is said to have loved his wife deeply and her death is commonly held as the cause and inspiration of the Taj Mahal. As her tomb is indeed the central focus of this magnificent complex, it is hard to deny this tragic love story.

The Taj Mahal is a stunning example of Mughal architecture which combines Islamic, Indian, Persian and Turkish styles in a masterful way. The construction was overseen by several architects and carried out by thousands of craftsmen and artisans. The principal designer was an architect called Ustad Ahmad Lahuri.

The Taj Mahal has extensive interior and exterior decoration. The outside is covered with all sorts of decorative elements, these elements were used to create abstract patterns, plant motifs and calligraphy of various passages from the Qur’an. The inside of the Taj Mahal is inlaid with precious stones and panels of bas-relief and even more beautiful calligraphy.

A common myth surrounding the Taj Mahal is that the head architect or perhaps even several architects and craftsmen, were either murdered or mutilated so that they could never design and build another structure to rival the beauty of the Taj Mahal. However, no contemporary or later sources report something like this happening. What may have happened instead was that those involved in the construction of the Taj Mahal had to sign contracts agreeing never to work on a structure of a similar design, this was common practice at the time.

The mausoleum dome of the Taj Mahal was completed in 1648, followed by the rest of the complex in 1653. Unfortunately Shah Jahan could not enjoy this masterpiece devoted to his wife for long as he was deposed by his son shortly after the completion of the Taj. The Taj Mahal became a UNESCO World Heritage site in 1983. This masterpiece of art and architecture remains one of the most recognizable and admired sites in the world.