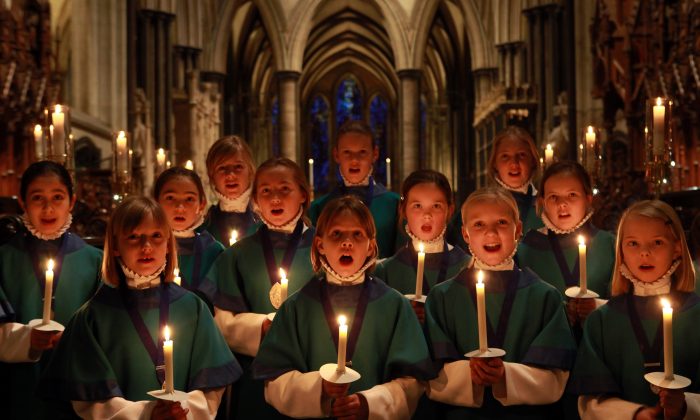 Choristers from the Salisbury Cathedral Choir practice ahead of the services held in the Cathedral marking Christmas Eve in Salisbury, England, on Dec. 23, 2009. Christmas has been celebrated in the cathedral for over 750 years since it was dedicated in 1258. It is thought that the foundation of the choir stretches back even further, with evidence of a song school in Salisbury as early as the 11th century. (Matt Cardy/Getty Images)
Arts & Culture

The Story of Silent Night

Walk into any public square or shopping mall at this time of year and an encounter with a traditional Christmas carol is well-nigh unavoidable. We may not sing them ourselves with anything like the frequency or fervor we once did at church but the tunes themselves defy relegation to our past.

One of the most ubiquitous is the carol “Silent Night” (originally “Stille Nacht”) by Joseph Mohr (1792–1848) and Franz Gruber (1787–1863). It’s estimated that its lyrics alone have been translated into at least 140 languages. On more than one occasion in both world wars, fighting at Christmas was brought to a temporary close by troops singing their native versions of “Silent Night” to one another across the front line.

On more than one occasion in both world wars, fighting at Christmas was brought to a temporary close by troops singing their native versions of ‘Silent Night’ to one another across the front line.

So how did this particular tune come to achieve such popularity? The fact that the lyrics and music of “Silent Night” have proved capable of sustaining a wide variety of adaptations (including the truly bizarre, such as a rendition from Star Wars’ Chewbacca) might help us explain its longevity and widespread success. But the peculiarities of the carol’s time and place of origin also play a part.

‘Silent Night‘ in its original version.

Mohr and Gruber were the curate and organist respectively of the parish church of (appropriately) St. Nicholas, in Oberndorf, an exquisitely picturesque village only 20 kilometers or so from Salzburg.

Legend would have it that on Christmas Eve 1818 the organ in this little church broke down, some say as a result of a hungry dormouse attacking the organ bellows. The quick witted organist penned a tune on the spot to Mohr’s words that could be accompanied easily on the guitar (which the librettist happened to be able to play). And the threat of a truly silent night was averted.

We have no evidence, however, to suggest that the organ was anything but fully functional that Christmas Eve. Mohr penned the words at least two years earlier when he had been living in a nearby village. They may have in part been inspired by the liberation of Salzburg from first Napoleonic, and then Bavarian, rule.

How Charles Dickens Redeemed the Spirit of Christmas

A Professor’s Message for the Holidays: Time to Celebrate!

But we are inclined to propagate creation myths like this nonetheless. They serve to consecrate and ennoble what might otherwise be rather mundane reasons for creative acts. We want “Silent Night” in particular to have a remarkable origin because what Grubel and Mohr produced was itself so remarkable.

Simply put, both tune and text are masterpieces of expressive concision. Each of the six original verses (the English version is commonly reduced to three) captures a foundational element of the Christian faith, from the miracle of the incarnation (Jesus, Lord at thy birth!), to the hope of redemption (Christ the Savior is born!). This last line of text is sung twice to music respectively higher and lower in pitch than the rest of the tune, emphasizing its special rhetorical force: exultation followed by affirmation.

Any possible irony we might have in singing about a silent night is averted by the special character of the melody as a whole. It has the contours and style of a lullaby, of a kind a mother might well sing to comfort and woo a baby to sleep.

Soon after the first performance, Gruber distributed arrangements for use in the towns around Oberndorf, and thereafter travelling bands of folksingers started to circulate it further afield. One in particular, the Rainer Family (a 19th century version of the von Trapps), took it to the courts of the Russian czar and Austrian emperor, and then, in 1839, to New York, where it was picked up by an emerging modern music publishing industry. Modern copyright protection was less well advanced. Gruber was soon forgotten as the composer and “Silent Night” was known for some time thereafter as a “Tyrolean Folksong,” or even attributed to one of Haydn, Mozart, or Beethoven.

After World War I the advent of wireless broadcasting helped spread “Silent Night” even wider. During the early days of national public broadcasting in America, performances of the carol by the Austrian/American opera star Ernestine Schumann-Heink (1861–1936) became something of a Christmas tradition, and secured the carol’s special place in the Christmas rituals of America. Later versions by crooners such as Bing Crosby and Gene Autry brought to it their own distinctive, and characteristically American, blend of sentimentality and suaveness.

This rise to global fame also coincides with the rise of many other fixtures of modern Christmas celebrations: trees, cards, Santas, department stores, and rampant consumerism. It is indeed not surprising that our shopping malls have become the most likely place for us to encounter it. Philosopher Roger Scruton suggested recently that we now lack for truly silent nights. When I hear versions like this, I tend to agree.

The fact that the St. Nicholas Church in Oberndorf has itself been replaced by a Silent Night Memorial Chapel seems, then, unintentionally ironic.

Six Classic Christmas Books to Share With Your Kids This Season

A more striking memorial to the carol, perhaps, is Alfred Schnittke’s version for violin and piano from 1978. Here, a solo violin plays an ascetic version of the tune punctuated by “wrong” notes set against a quiet, but menacing peal from the piano. While it might at first seem an irreverent, even disrespectful, gesture, it soon becomes apparent that the carol is in fact being presented to us as a ruin.

The particular time and place that produced “Silent Night,” along with its cultural and theological norms, Schnittke seems to say, is now lost to us. This is what we should expect. The past, after all, is a foreign country, they indeed do things differently there. To pretend otherwise is to risk turning the carol into kitsch.

Nevertheless, the longings it expresses do retain contemporary currency, and perhaps this is the ultimate reason for the longevity of “Silent Night.” Christian or not, we all wish for moments of tranquility, and we all sense in the birth of a child possibilities for a better future. For these reasons, I suspect this particular carol will continue to be heard over the din of our own Christmas seasons for many a year yet.

Peter Tregear is an Australian-born musician and academic currently based in London, where he is a teaching fellow in music at Royal Holloway at the University of London. This article was previously published on TheConversation.com.