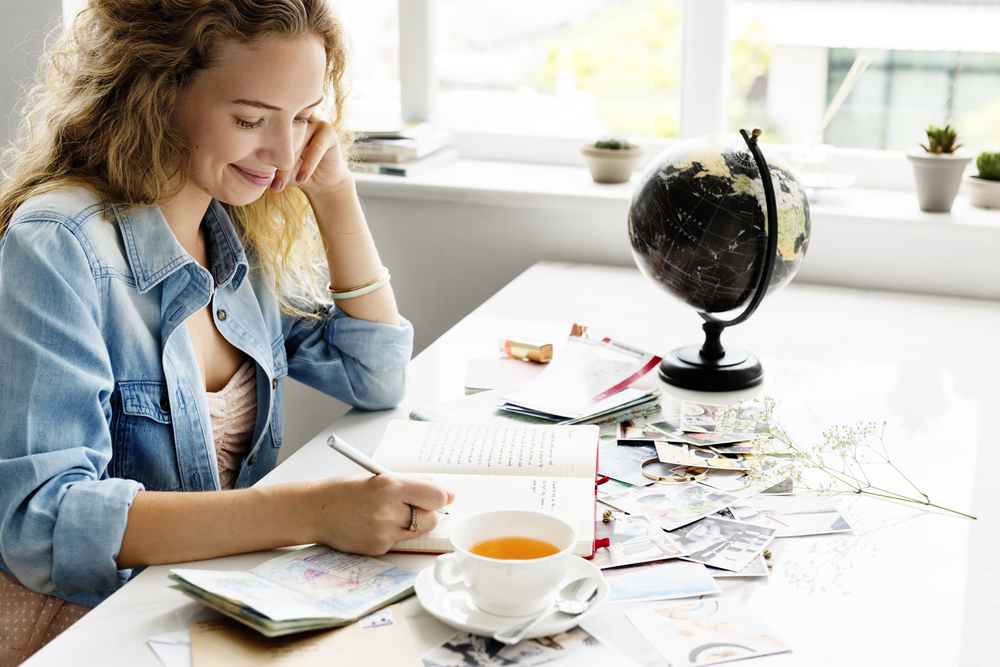 Controlling our emotions, desires, and actions lets us create better lives for ourselves
BY Tatiana Denning TIMEApril 7, 2022 PRINT

I learned a valuable lesson from my son.

From the time he was in the womb, according to my ultrasounds, my son loved to suck his thumb. After he was born, we tried to get him to use a pacifier, but out came the pacifier, and in went his thumb. His thumb, combined with his silk blanket, became his source of comfort, and his means of lulling himself to sleep. His thumb seemed to be in his mouth more than it was out.

When the time for kindergarten came, and he showed no signs of giving up his thumb habit, I came up with the idea of showing him photos of people with misaligned teeth from the sucking. After explaining that this could happen to him, he reluctantly agreed that when he lost his first tooth, he’d stop sucking his thumb.

A few months later, when he lost his first tooth, he remembered his promise and asked, “Momma, does that mean I have to stop sucking my thumb?”  After I answered yes, he replied, “But what if I can’t do it? It helps me fall asleep, and sometimes I don’t even know I’m doing it.” But I told him not to worry, and that I knew he could do it.

When bedtime came, he asked, “Momma, can I please suck my thumb, just tonight?” I told him I knew it was hard, but the longer he kept sucking his thumb, the harder it would be to stop. I told him to not think about it too much, and before long, he was asleep.

For the next three nights he asked the same question, just once, each night. To my surprise, after only a few days, he was falling asleep without mentioning it. I marveled at his willpower, and how quickly he was able to give up his lifelong dependence on his thumb.

My son’s ability to have such self-discipline at a young age made an impression on me. It wasn’t the only time I’d noticed it, and I joked that his willpower must come from his dad, who is equally disciplined. While I’ve worked to do better in this regard, I certainly have room for improvement.

Reflecting within, I realized that I can be self-indulgent, lazy, want what’s comfortable and easy, sometimes say or do things to show off or look good in the eyes of others, and, at times, ignore the schedule and goals I’ve set for myself. So, in the name of bettering myself, I resolved to undertake my own, personal, self-discipline project.

I thought a good place to start is to explore exactly what self-discipline means, as well as what it’s composed of.

According to Google’s English dictionary, self-discipline is defined as: 1. the ability to control one’s feelings and overcome one’s weaknesses; 2. the ability to pursue what one thinks is right despite temptations to abandon it. Merriam-Webster dictionary defines it as: correction or regulation of oneself for the sake of improvement.

In essence, self-discipline is controlling one’s desires and emotions in exchange for greater gain, even if it requires more time and more effort.

But it’s not enough just to have these things; they must be based in goodness and wisdom. For example, a criminal may have the patience of a saint while waiting to rob a house, but this patience is born of neither goodness nor wisdom. Therefore, a virtuous heart and mind, based in a strong moral character, are required.

It seems that self-discipline is no simple matter. It requires not just the ability but also the willingness to govern one’s own behavior in accordance with one’s values, commitments, and goals. While it may sound easy on paper, self-discipline can be very challenging.

The Key to Happiness and Success

H.A. Dorfman, a leading sports psychologist and author on the mental skills needed to achieve success in professional sports, says, “Self-discipline is a form of freedom. Freedom from laziness and lethargy, freedom from the expectations and demands of others, freedom from weakness and fear—and doubt. Self-discipline allows a pitcher to feel his individuality, his inner strength, his talent. He is master of, rather than a slave to, his thoughts and emotions.”

Dorfman knows that self-discipline is the key to success, not just in sports, but in life.

In fact, studies show that the self-disciplined fare better in all aspects of life—from better health to less anxiety and depression, fewer addictions, better focus, increased honesty, more harmonious relationships, more success and happiness at work or in school, and more financial security than their less-disciplined counterparts.

When we lack self-discipline, we indulge our selfish sides, and diminish our sense of personal responsibility. Rather than being held to a higher standard, requiring us to inhibit our impulses and desires, it’s instead easier to blame others for what goes wrong.

Conversely, when we exercise self-restraint, we not only feel better about ourselves, but we think of others first. Our confidence naturally grows, we feel happier and more self-assured, and we have a sense of control over our lives.

Instilling Self-Discipline in Our Children

Founding Father Benjamin Franklin, who understood the importance of self-discipline, said, “Educate your children to self-control, to the habit of holding passion and prejudice and evil tendencies subject to an upright and reasoning will, and you have done much to abolish misery from their future and crimes from society.”

In fact, many studies have born this out. For example, one study followed 1,000 children from birth through age 32 and found that “childhood self-control predicts physical health, substance dependence, personal finances, and criminal offending outcomes.” Success with many of life’s tasks depends on a child’s ability to “delay gratification, control impulses, and modulate emotional expression.”

Interestingly, the study found that self-control is not linked to a person’s intelligence or social class, and can be taught and learned. Researchers concluded that teaching self-control in childhood not only benefits the individual, but could also decrease societal costs and promote prosperity and stability.

What are some ways we can instill self-discipline in kids? As an example, studies show that certain classes, like martial arts, music lessons, and mastering a second language, are great self-control enhancers.

What goes on at home is also crucial. According to the Child Mind Institute, “Self-regulation is a skill that children need to be taught and practice. The trick is not to avoid hard situations. Instead, parents can coach kids through tough situations.” When kids act out, we can “encourage them to slow down and reflect. With a parent’s help, kids can learn to ask themselves: What went wrong? Why? How can I fix that for next time?” Mindfulness clearly plays an important role.

Researchers have found that games like Red Light, Green Light or the freeze game, which teach going against habit and inhibiting impulses, can also help. Giving a child a task and defining the rules is another way to instill self-discipline. As kids pause to reflect upon their behavior, they can see if it aligns with doing the right thing.

Instilling Self-Discipline in Ourselves

If we don’t have correct thoughts, we cannot have correct actions. Therefore, paying close attention to the many random thoughts we have during the course of the day—and correcting the thoughts that don’t align with who we want to be—is crucial.

Ultimately, self-discipline is a buffer that helps us act from our values and rationality, rather than from emotion or to indulge our desires.

To support this effort, I created a Facebook page, along with a joinable Facebook group, entitled “The Self-Discipline Project.” Here, you can share your personal stories, struggles, and successes—and hopefully get some tips and motivation from others along the way.

What are some other actionable steps we can take to improve self-discipline?

First, make time for self-reflection. Knowing oneself, as Socrates said, is vital. Unfortunately, many of us have never really stopped to define our values. Without this knowledge, we may flounder or act in ways we later regret. It’s important to think about who we are, who we want to be, and what our values are, then write them down, and remind ourselves regularly.

If your values include things like honesty, kindness, integrity, thinking of others first, patience, tolerance, and forgiveness, then when you are faced with a tough situation, it makes exercising self-discipline and doing the right thing that much easier.

Next, find what motivates you and is important to you. Then write out a plan, listing specific short-term and long-term goals, and put them where you can see them. According to psychologists, self-monitoring leads to improved compliance and better outcomes, so assess where you’ve improved and where you can do better at the end of each day.

Sharing your plan with a friend (or The Self-Discipline Project), touching base regularly, and reaching out for help also increases success. Not only does this provide a sense of accountability, it also provides moral support.

Be optimistic and determined. When the inevitable missteps happen, don’t be discouraged. Instead, learn from your mistakes, pick yourself up, and keep going, always striving to do better.

Remember, self-restraint is like a muscle; the more you use it, the stronger it gets. Much like going to the gym, it’s tough at first, and you might feel depleted, but as you persevere, your stamina and strength increase, and it doesn’t seem as difficult.

When we increasingly act from the good parts of ourselves, they become stronger, while the undesirable parts become weaker and begin to disappear.

I recently asked my son, who’s now 15, how he’s able to be so self-disciplined (when his teenage self wants to be). He replied, “I think it’s because I don’t think the things that I’m trying to overcome are that important—they just don’t matter that much. I think that makes it easier to let them go.”

There’s wisdom in his words. When we don’t attach much importance to what we’re trying to overcome—when we let go of outdoing someone in an argument and instead display compassion, forgo extra sleep in order to get up and exercise, or refrain from buying that new item so we can stay on budget—we strengthen our self-discipline. By not hanging onto the parts of ourselves that we need to let go, achieving self-discipline becomes possible.

As Abraham Lincoln said, it’s all a matter of what we want most.

This article was first published in Radiant Life magazine.