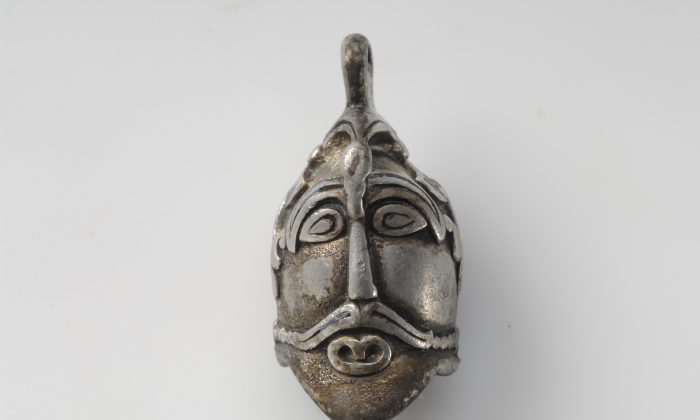 This silver pendant in the shape of a man’s head comes from a unique grave find containing objects of precious metals that mark the deceased as someone of great importance. Close inspection reveals he wears a bird atop his head with its wings extending down to his ears. (© The Swedish History Museum)
Arts & Culture

In the 1977 edition of the Random House Encyclopedia, Vikings are described as “Scandinavian pirates.” The Canadian Museum of History’s fascinating visiting exhibition from the Swedish History Museum in Stockholm sheds new light on that description because of recent archaeological discoveries.

In the exhibition, which opened Dec. 3, a Viking is defined as a person from Scandinavia involved in plundering, trade, or colonization. Ordinary people are referred to as Norraener men (Norsemen), almost all of them farmers, craftspeople, or slaves.

It is true that Viking raids were conducted in areas of Europe and the British Isles during the 10th and 11th centuries, and these men from the North exerted a powerful influence on the history of Europe by encouraging the growth of feudalism. Not only did they conquer what was then Rouen and Paris, but they managed to have the Duchy of Normandy handed over to them by a weak French king.

The Vikings also founded Ireland’s first towns, such as Dublin, Cork, and Wexford, and any town in England today with the ending “thwaite” (derived from the Norse “thveit”), or with the ending “toft” (meaning farm or village, such as Lowestoft), is of Norse origin.

The exhibition, titled “Vikings,” focuses on the home life, myths, beliefs, and burial traditions of these adventurous people from the North. Visitors will discover links between the Vikings and several countries in Europe, and they will marvel at the craftsmanship and symbolism of what these seafaring “pirates” were able to do with their amazing warships, which could seat 30 oarsmen with a crew of up to 90.

The exhibition focuses on the home life, myths, beliefs, and burial traditions of these adventurous people from the North.

According to museum notes, the Vikings, who were skilled shipbuilders and seafarers, “were capable of navigating the seas without instruments and navigational calculations” using knowledge about “winds, tidal currents, weather phenomena, and travelling times accumulated by many generations of ancestors.”

Although contact with European peoples occurred earlier, the world of the Scandinavians “expanded considerably during the Viking Age.” Trading and plundering brought riches to the North. Silver, furs, glass, beads, and people were exchanged, and visitors to the exhibition will learn that trading routes were “more complex than purely export and import in two directions, and will discover that only a very small amount of the goods traded during the Viking Age has been preserved to the present day.”

Visitors will also learn that the dead continued to belong to the farm household and “lived on,” not in the home but in the mound or the mountain. Cemeteries were living places near the family settlement and were used for many purposes. It was considered an honourable death if a warrior fell on the battlefield. However, “a natural death of the farm was anything but.”

During most of the Viking Age, according to exhibition notes, the “people of Scandinavia were aware of two very different religious systems: the domestic Old Norse tradition and Christianity.” It seems that the two systems “blended into a hybrid, as can often be inferred from existing graves.” By 1100, however, Christianity was the only official religion.

According to Old Norse mentality, one could count on “a good life in the hereafter if, in this life, you embraced values that benefited your family, kinship, or the warrior collective.”

Viking communities were peasant communities. Owning land was very important. There were free people allowed to carry weapons and talk at assemblies and those who were not free, with no rights at all. Women ruled the household on the farm, the focal point of society. They carried keys on the outside of their clothing, a symbol of their power.

The craftsmanship shown in the exhibition is impressive. For example, the runic symbols incised on a spearhead have lasted, whereas the more usual runes, which were on wood or bark, disintegrated. The key with its chain, an example of the keys the women wore, is also memorable.