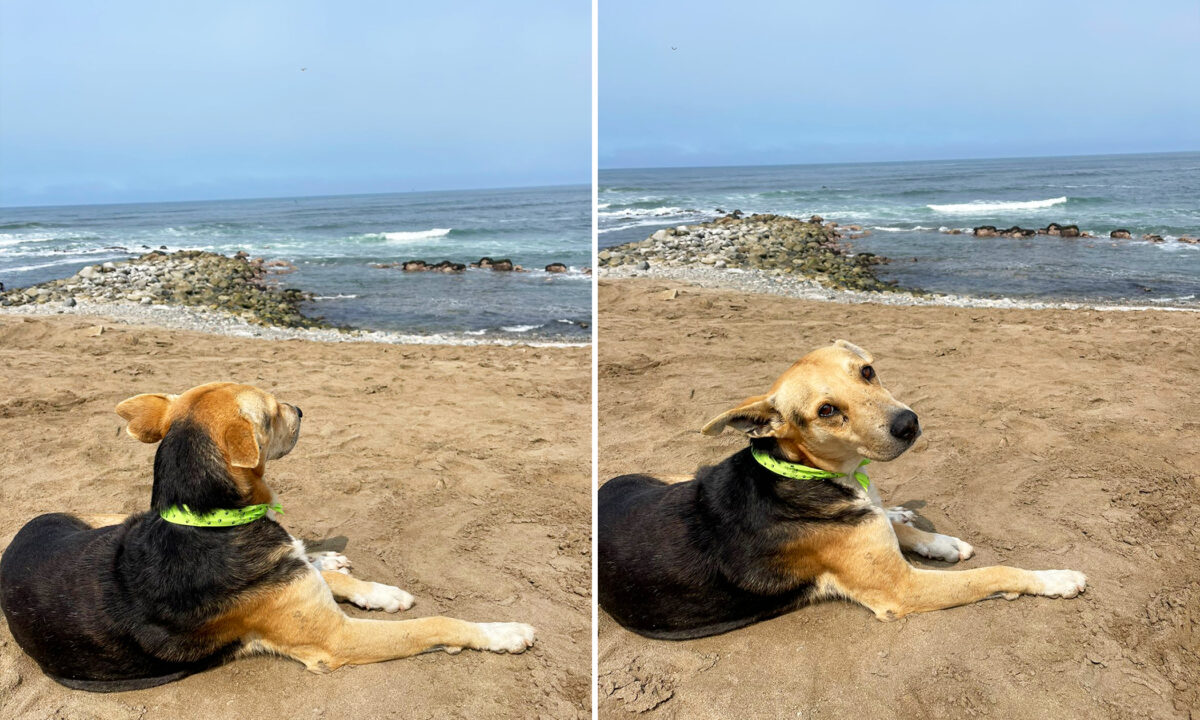 The Moving Story Behind Dog Sitting All Alone, Staring at the Sea: ‘It Broke My Heart’

On a family outing to the beach near her home in Peru, a woman came across a little dog sitting all alone and watching the ocean. As it turned out, there was a sweet, sad story behind his sea-gazing.

Jolie Mejía, 23, of Lima, first saw the dog on the nearby sandy shores of Punta Negra on Feb. 27. He approached, and was friendly.

Mejía, a marketing student, told The Epoch Times that the dog didn’t seem to be abandoned because “his fur looked nice and he had a green ribbon around his neck.” She thought his owner must be elsewhere on the beach, or swimming in the sea.

“He was really calm and had a peaceful look in his eyes,” Mejía recalled. “At first, he laid down with us but kept his distance. After a few minutes, I started petting him … and taking photos, until a local man passed by and recognized the dog.”

The man told Mejía that the little dog’s name was Vaguito, meaning vagrant in English.

“I thought he was his owner,” she said. “I said something like, ‘Hey, don’t worry, I’m giving you back your dog!’ in a friendly way, but then he said Vaguito was not his dog. He said Vaguito was a really popular dog on the beach; every local neighbor knew him and loved him.”

It was then that Mejía learned the sad story behind the dog’s seaside vigil.

Vaguito’s owner, a fisherman, had passed away about a year before, and the loyal dog returned to the shore every day, waiting patiently for his boat to come in.

“He got excited every time he saw boats or other fishermen in the sea,” Mejía said. “I felt really moved by his story. He was such an angel, it broke my heart that he would never find his owner again, and at the same time, his love inspired me very much.”

Mejía asked the local resident she met at the shore if Vaguito needed a home, but he assured her that neighbors were taking good care of the dog, providing him with food, shelter, and medical care. The green ribbon around his neck had come from the local vet. Mejía had another idea; she would share Vaguito’s story on social media in hopes of encouraging her friends to visit the lonely dog.

“I thought that was the only way to help him, giving him as much love as possible,” she reasoned. “Taking Vaguito away from that beach would probably harm him more than helping him. His home and purpose was now there.”

“This beautiful baby impacted me on the beach. A man told us that this is his home now … his owner was a fisherman who passed away a while ago,” she wrote, as translated from Spanish. “Since then, he stares at the sea every day, and gets excited every time he sees boats.”

The tweet went viral. Thousands responded with love and empathy for the little dog and the human he lost.

Mejía has not returned to Punta Negra since meeting Vaguito and doesn’t know how he is doing. Nonetheless, she thinks it is important for all people to realize that a human companion means everything to a dog.

“Their love is infinite,” she told The Epoch Times. “I hope that this story inspires people to take care of their pets, and give them all the love they deserve.”