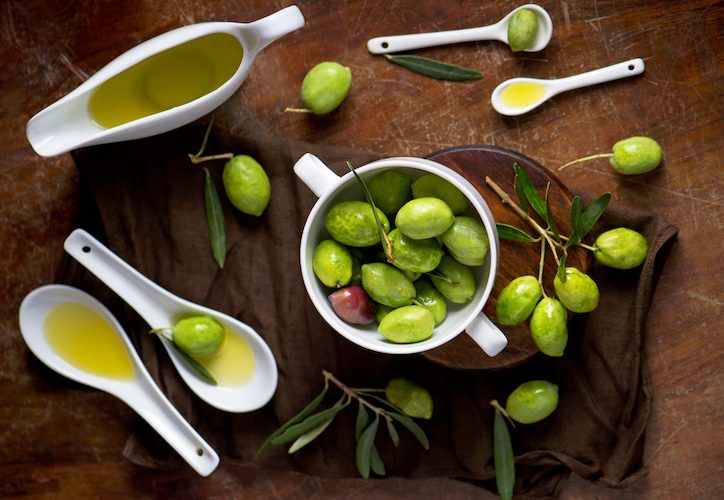 The Most Important Thing About Olive Oil

The secret to good olive oil? It’s all in the timing
BY Steve Jenkins TIMEFebruary 27, 2019 PRINT

There are those of us who truly believe that olive oil is the most wonderful thing in the world. Greater than anything.

Walking in an olive grove is a joy that is hard to improve upon. But then, trees have always been a passion of mine since I was a boy. Climbing them. Getting way high up, and just sitting there. Birds stop by and perch there with you. Often it was hard to get back down.

Oaks and maples were the best trees for climbing. Elms were huge, vaulting and gorgeous, but terrible for climbing because the first limbs were just too high up, and the trunks of old elms too broad to offer any chance of shinnying. I was a master shinnier. I could shinny up almost anything.

Suddenly I was grown up, and in my late 20s found myself in olive groves all over Europe and other countries. Olive trees are marvelous for climbing. Smooth bark around beckoning limbs leading to the heights of ancient trees, many of them 200 years old and even much older. It was in the bosom of those olive trees that I realized there is no more gorgeous tree.

What most people know about olive oil is scant, and often in error. What they have read and heard about olive oil was written by people who simply had not done their homework, writers who parrot opinion rather than verifiable information. Like, “Olive oil shouldn’t be used for frying because of its low smoke point.” Wrong.

Olive oil, unless it’s cheap, oxidized, non-extra-virgin olive oil, won’t give off a wisp of smoke at temps up to 410 degrees Fahrenheit. That’s plenty of room to fry anything or saute anything you want. Grapeseed and peanut oil have similarly high smoke points, but as the late, great Patience Gray said, “Olive oil confers upon a dish a wonderful flavor. This cannot be said of vegetable oils.” Most of the other seed and nut oils have relatively low smoke points, and are unsuitable for frying.

The thing I hope you’ll come away with after reading this is that unless the olive oil in front of you makes you cough when it reaches the back of your throat, that olive oil is not worthy of you. Unless that olive oil has a distinct pepperiness, and a gentle, pleasing, adult, incipient bitterness on the front of your palate, you must, again, reject it. It is that pepperiness and slight bitterness that attest to an olive’s definition of early harvest.

A Green Olive Is a Happy Olive

It is only early harvest October olive oil, from olives harvested and within hours milled when they are still green or have begun to fade from green to beige, that offers the highest polyphenol levels. As the olives ripen in November, they change from green and beige to pink and red, and into December and as late as the ensuing January, brown and purple and finally black.

Southern Hemisphere olives are harvested six months the opposite, of course, but a black olive anywhere is angry. Angry that it has been left on the tree, good only for mulch. Those other colorful olives offer little other than a lot more olive oil. (More on that later.)

Green olives’ polyphenols are a measure of the desirable lowest oxidation level that results in olive oil’s magic and “raison d’être”—spiciness, fragrance, pepperiness, and bitterness. They are an indication, a promise, that this oil will not just be capable of amplifying flavors in all it touches, but also give you the antioxidants that make and keep you healthy, long-lived, and with less chance of disease.

Within a week or two of olives changing color, their polyphenol levels don’t just gradually lessen. They plunge like a rock.

That’s it. There you have it. The secret of olive oil that almost no one knows. The worldwide olive oil industry has been sandbagging you all this time.

All of this is pretty stark. The olive oil in most people’s lives is late harvest olive oil. Even the highest-selling olive oils sold at retail and offered on the internet have been blended with earlier-harvest olive oil (unless the label says otherwise, which is quite rare) so that they may have a touch of spice and fragrance and bitterness, but the bulk of them is not early harvest oil. Every single olive oil producer I know offers olive oil that has been blended with other olive oils, often not even produced by them. This practice is not just how they make money, but also ensures that that brand will taste the same year after year, the same way blended whiskey will.

On top of that, most olive oils sold in stores and on the internet have been cooped up in bottles and tins for months and months. They are mostly stale, lifeless, oxidized, and not worthy of you.

The olive oil that is, is living and breathing, billowing with fragrance and flavor.

Steve Jenkins has been importing olive oils for more than two decades. He runs OliveOilJones.com with his wife, Michelle.