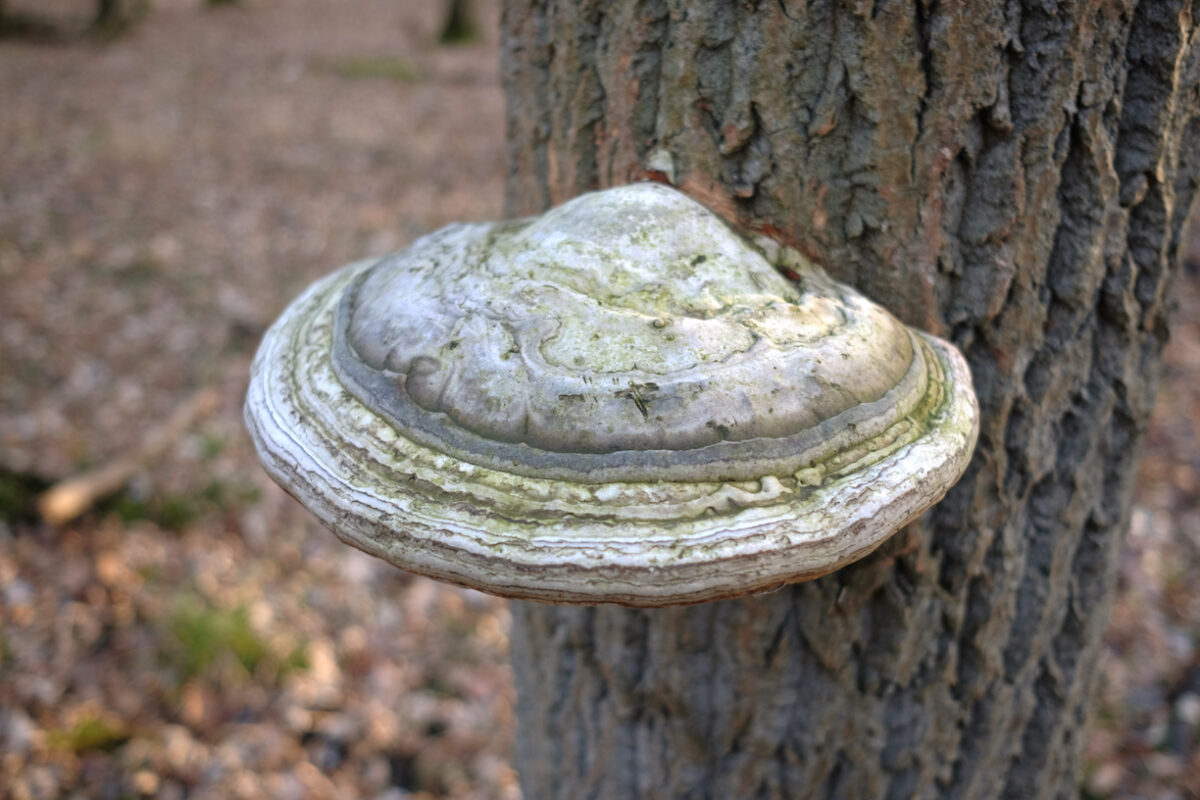 Agarikon is a potent antibacterial, antiviral, and antimicrobial with chlorinated coumarins that are highly active against multi-drug-resistant strains of tuberculosis. (Kiryl Lis/Shutterstock)
Food as Medicine

The oceans, forests, and jungles of our planet are the sources of our oldest medicines. Long before a trip to the drugstore could yield a bottle of tidy pills, medicines grew in the deepest, most fertile places on earth.

And many of them grow there still, at least in the natural places that remain.

Fungi are vital to all life on earth. They exist inside our bodies, our food, and the soil beneath our feet.

Fungi have been used for millennia by cultures across the globe for their powerful healing abilities and as spiritual aids. Many modern medicines come from fungi, including penicillin, to fight bacterial infections. Other examples of medicines derived from fungi are cyclosporine from Tolypocladium inflatum, which enables organ transplants, and lovastatin from Aspergillus terreus, which is used to lower cholesterol.

One of the oldest and perhaps more mysterious is a species of fungus called agarikon, or Fomitopsis officinalis. It’s reportedly the oldest living mushroom known to us and can live up to 100 years. Agarikon is a polypore wood conk that grows on trees and is found almost exclusively in the old-growth forests of the Pacific Northwest and on a few of the sky islands in Austria and Slovenia.

Agarikon grows like a fruit hanging from the places where branches connect to the trunks of trees. It is hoof-shaped when young, developing into a cylindrical shape, and grows to very large sizes resembling a giant beehive as it matures.

The earliest mention of agarikon is from A.D. 65 by Greek physician Diascorities, who described it as “elixirium ad longam vitam” which means the elixir of long life. The ancient Greeks used agarikon to treat respiratory illnesses, night sweats, and consumption (tuberculosis).

In North America, the indigenous peoples of the Pacific Northwest also revered agarikon for its spiritual and medicinal properties. In the local languages, it was referred to as “bread of ghosts” or “tree biscuits.”

Agarikon was used by shamans (the healer and spiritual figure in these communities), who carved it into masks and figures for ceremonies. When a shaman died, agarikon, in various carved forms, was placed at the head of the grave to act as guardians, protecting the shaman in the afterlife.

When used for medicinal purposes, the mushroom was ground into a powder and used for various ailments. Some oral traditions from certain tribes recount that agarikon was used to heal tribes from European diseases like smallpox.

A 2013 study concluded that chlorinated coumarins in agarikon were highly active against multi-drug-resistant strains of tuberculosis.

When working with the Bioshield program (part of the U.S. defense department), renowned mycologist and scientist Paul Stamets discovered that mycelial extracts from agarikon had potent properties against poxviruses, flu viruses, and herpes.

Working with the University of Mississippi School of Pharmacy, Stamets and the team there isolated two novel anti-smallpox molecules. Stamets notes that these molecules are even more potent than cidofovir, an antiviral pharmaceutical.

Studies have also shown that agarikon is highly effective against herpes, influenza A and B, smallpox, cowpox, swine and bird flu, and other viruses such as the orthopoxvirus.

The coumarin found in agarikon is thought to be what helps to treat conditions involving the lungs, such as asthma, cough, and pneumonia, by helping open the lungs, decrease inflammation, and get rid of mucus. In a 2018 study, the antimicrobial compounds of agarikon were found to be particularly potent against two dangerous strains of tuberculosis, reaffirming ancient beliefs.

Agarikon was found to be a natural bioshield against potential infection and disease transmission, and agarikon extract shows evidence of broad-spectrum antibacterial and antiviral activity. After testing 11 strains of agarikon from North America, a few showed exceptionally high activity against viruses, including pox (cowpox), swine (H1N1) and bird (H5N1) flu, and herpes (HSV1, HSV2) viruses. In several sets of tests, extracts against flu viruses exceeded the potency of the drug ribavirin by a factor of ten or more. Recently researchers in Russia have confirmed the strong antiviral activity of agarikon against the H5N1 flu virus, also finding that agarikon is comparatively nontoxic to humans.

Saving Our Environment May Mean Saving Ourselves

Perhaps the most fascinating part of this elusive mushroom and fungi, in general, is that many of the pathogens that affect fungi affect humans as well. Mycologists like Paul Stamets are learning a lot from studying agarikon’s natural defenses against microbes and the solutions it has developed against external invaders.

The problem is that agarikon is endangered, and the only places it’s found—the old-growth forests of the Pacific Northwest—are shrinking. In fact, only 5 percent of them remain. That means we’re quickly losing our opportunity to study this—as Stamets puts it—”deep reservoir of pharmacologically active agents.”

“The biodiversity of our ecosystems has within them a wealth of potential solutions to the diseases that afflict us,” Stamets said. He and others are working to study as many of the medicinal effects of agarikon and other fungi as possible, and preserve the forests that are their homes. Stamets himself has tirelessly collected and cataloged 37 strains of agarikon (the largest culture bank of this species in the world) and is trying to save it from extinction.

In a culture that has forgotten our connection to the natural world, the story of agarikon is a sobering reminder of what we might lose if we don’t acknowledge the wisdom of these organisms and protect the habitats in which they live. Destroying them could destroy the potential cures for unforetold diseases.