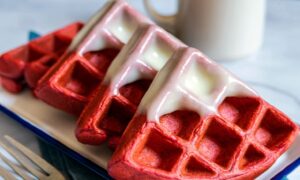 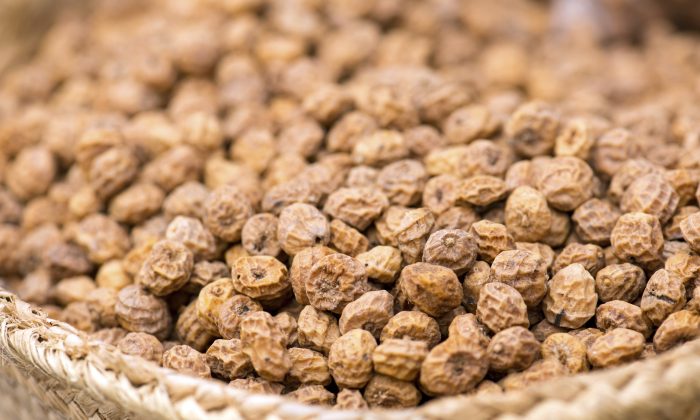 There is something about tiger nuts that harkens back to a primordial place. You eat one, then another, and another. In fact, you may find it hard to tear yourself away from the bag. There is actually a decent explanation to explain this. It has roots in our history.

It turns out that these bite-size tubers (yes, roots) have a carbohydrate, fat, and protein ratio almost identical to human breast milk. Our attraction to tiger nuts may actually be instinctual.

Early humans between 2.4 million and 1.4 million years ago are known to have gorged on tiger nuts, which grew in abundance in the old world. According to a recent Oxford University study, the tiny knobs of sweet-tasting nutrition comprised as much as 80 percent of “Nutcracker Man’s” diet.

Tiger nuts are nutritional powerhouses that grow at the root of the Cyperus esculentus grass, a type of sedge found in the same family as the papyrus grass known for its role as the paper in Egyptian scrolls.

Researchers Daniel Zohary, Maria Hopf, and Ehud Weiss wrote in their book “Domestication of Plants in the Old World,” cited in a Wikipedia entry, that tiger nuts were cultivated by the ancient Egyptians as far back as 6,000 B.C.

Could eating tiger nuts compel our minds to remember what it feels like to be nourished by our mother’s breast, or resurface our genetic memory? Maybe. But what matters more is that tiger nuts offer certain rare forms of nutrition that can help to heal some of the maladies that have sprouted from our modern, highly processed diet.

In the United States, tiger nuts are one of the latest superfoods to catch the attention of the paleo community, particularly those dieters who appreciate the tiny legumes for their rare source of prebiotic fiber.

A prebiotic fiber, such as that found in tiger nuts, feeds the trillions of beneficial microbes in the gut, known as the human microbiome, which can enhance the body’s natural ability to heal itself and send autoimmune disorders into remission.

The paleo group that follows an Autoimmune Protocol (AIP) paleo diet likes tiger nuts’ grain-free, nut-free, dairy-free, and prebiotic qualities, while not getting bothered by the tiger nut’s high carbohydrate content, since it comes from a vegetable source.

The high carbohydrate content cancels any love coming from non-AIP paleo dieters, who focus on a low-carb, high-protein diet. (Tiger nuts are a good source of protein at 5 grams per ounce, but not a great source.)

New technologies in recent years have enhanced the study of the human microbiome, allowing researchers to catalogue changes and differences in the composition of the microbes in, say, an American, versus an African who still lives a hunter-gatherer lifestyle.

The public’s awareness of the relationship between our health and what we eat is at an all-time high, evidenced by an explosion in foods like tiger nuts that carry health claims.

Prebiotics found in foods like tiger nuts, and probiotics, such as those found in Greek yogurt, help to stimulate a healthy microbiome, and all major food companies are in R&D overdrive working to bring “functional” foods to market that deliver a health benefit.

“After you see the connection between the food and diet, you thrive,” says George Papanastasatos, 31-year-old co-founder, COO, and president of Organic Gemini, the leading company in the United States producing tiger nut snacks and drinks.

One of the most significant and obvious benefits of tiger nuts today is their resistant starch content, which is visible as a starchy sediment at the bottom of Organic Gemini’s TigerNut Horchata drinks. This sediment does not mix, even after shaking, but it serves as a powerful reminder of the uniqueness of this ancient food.

The video below, made by Australia’s national science agency, CSIRO, illustrates the transformation of resistant starch into butyrate.

Tiger nuts have about half the resistant starch as raw potato, but since we normally don’t eat potato raw, blogger and paleo authority Richard Nikoley writes on his blog, raw tiger nuts are the best source.

Anecdotal feedback from people who supplemented their diet with resistant starch says they experienced better digestion, better sleep, vivid dreams, and suppressed appetite, according to comments posted and compiled on Nikoley’s blog.

The logic in favor of increased fiber (remember, resistant starch is a type of fiber) is simple. Americans—eating a typical modern diet that favors meat over fruits and vegetables, and processed grains with their natural fiber content removed—consume an average of between 15–20 grams of fiber daily, according to the USDA.

Hunter-gatherer societies, in comparison, are estimated to have consumed between 50–100 grams daily, according to research compiled by prebiotin, a prebiotic fiber supplement company founded by gastroenterologist Frank Jackson.

From this perspective, getting more fiber into our diet makes sense.

Since resistant starch essentially resists digestion, it can help us feel fuller longer, another benefit of eating tiger nuts, and the benefit Organic Gemini highlights above all others on its product website.

Resistant starch is also scientifically proven to reduce glycemic response, which is helpful for diabetics in managing their condition, according to research published in Comprehensive Reviews in Food Science and Food Safety.

Aside from the unique benefits discussed above, tiger nuts are also a good source of phosphorus, potassium, vitamins E and C, amino acids arginine, glutamic, and aspartic, and digestive enzymes catalase, lipase, and amylase.

How Tiger Nuts Compare to Other Foods