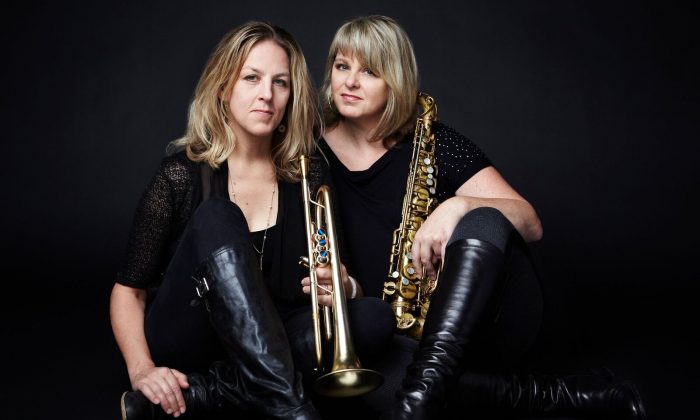 CD Reviews: The Latest From the Women of Jazz

Jazz women are coming to the fore and not just as singers where they have always reigned supreme, but also as bandleaders, horn players, and percussionists. Here are some new albums that highlight the diversity and virtuosity of female jazz artists.

With all the gloomy news, we can all use a lift. One way to unwind is to listen to “Laughing at Life” (Anzic Records), the effervescent new CD by Duchess. This is a vocal trio consisting of three excellent jazz singers: Amy Cervini, Hilary Gardner, and Melissa Stylianou, each of whom has released solo albums of merit.

Whether harmonizing or singing solos, the three communicate joy, wit, and sometimes deep emotions. They sound happy singing “On the Sunny Side of the Street” or the romp “Swing Brother Swing” and have fun with Johnny Mercer’s rarely performed “Strip Polka.”

“Stars Fell on Alabama,” “Every Time We Say Goodbye,” and “Here’s to the Losers” highlight their sensitive side. Cervini contributes a flirty rendition of “Give Him the Oo La La.” The trio’s version of “Creole Love Call,” arranged by Wycliffe Gordon who plays trombone (and even sings), pays tribute to Duke Ellington and Adelaide Hall, who recorded the tune in 1927.

Michael Cabe plays piano, Jared Schonig is on drums, Matt Aronoff plays bass, Jesse Lewis is on guitar, and special guests Anat Cohen on clarinet and Wycliffe Gordon each sit in on two tracks. Oded Lev-Ari produced and wrote most of the arrangements.

The liner notes speak of the sisters’ “Northern aesthetic;” they were raised on Vancouver Island in Canada. Their cool sound is also reminiscent of Miles Davis’s work with Wayne Shorter. The themes are engaging and the musical interplay between the sisters and Monder is magical. These sisters not only know how to play but also how to communicate with each other in an organic way and the guitarist fits in perfectly.

Chelsea McBride is extraordinarily gifted. The Toronto-based 25-year-old not only plays tenor saxophone and leads the 19-piece band (The Socialist Night School) but composed, orchestrated and conducts all the pieces on the CD.

The ambitious album, “Twilight Fall” (on Browntasauras Records), attempts to present a life cycle, taking the listener from birth to the end of the journey at 73. Five of the pieces have lyrics, which McBride also wrote, conjuring up a beach scene, experiencing the death of a friend, the cycle of seasons in a small town and more. The vocals are gracefully sung by Alex Samaras, who sounds a little like Sting.

McBride is a fluent tenor sax player but features her own playing on only three tracks. She generously gives solos to three other saxophonists as well as other band members. The album is geared more to presenting the leader’s conception than to highlight her own playing.

If you think you don’t like big band music, check out this one. The pieces and orchestrations are so fresh, the CD may change your mind. “Foot in Mouth” has a tune you might find yourself humming the next day and the nearly ten-minute track covers a lot of territory.

Jazz singer Sarah Partridge came up with inspired idea to record an album of songs by Janis Ian. Many jazz artists have performed Joni Mitchell songs but Ian (who burst on the scene at age 14 with “Society’s Child” in 1966) has been overlooked by the jazz world. The Partridge and Ian are so compatible that they even co-composed two of the songs on the CD.

“A Quarter Past Heartache” is an up tempo kiss-off song, in which the singer happily notes that since her ex-lover left town, the toilet seat is always down. The other song they co-wrote, “Somebody’s Child,” expresses concern for the homeless, but Ian’s songs have often concerned social issues.

“Society’s Child” is radically changed in an arrangement by drummer Tim Horner, who also arranged “At Seventeen.”  The other inventive arrangements are by pianist Allen Farnham.

“Forever and a Day,” a gentle love song which has never been recorded before, should be a jazz standard.  “Matthew” (which has justifiably been compared to “Strange Fruit”) is a searing remembrance of the 1998 murder of Matthew Shepard.

Partridge really wails on “Belle of the Blues” and swings on “Silly Habits.” Strangely, she doesn’t sing “Stars,” the one Ian song that jazz artists such as Nina Simone have sung. Maybe “Bright Lights and Promises” will get a deserved sequel.