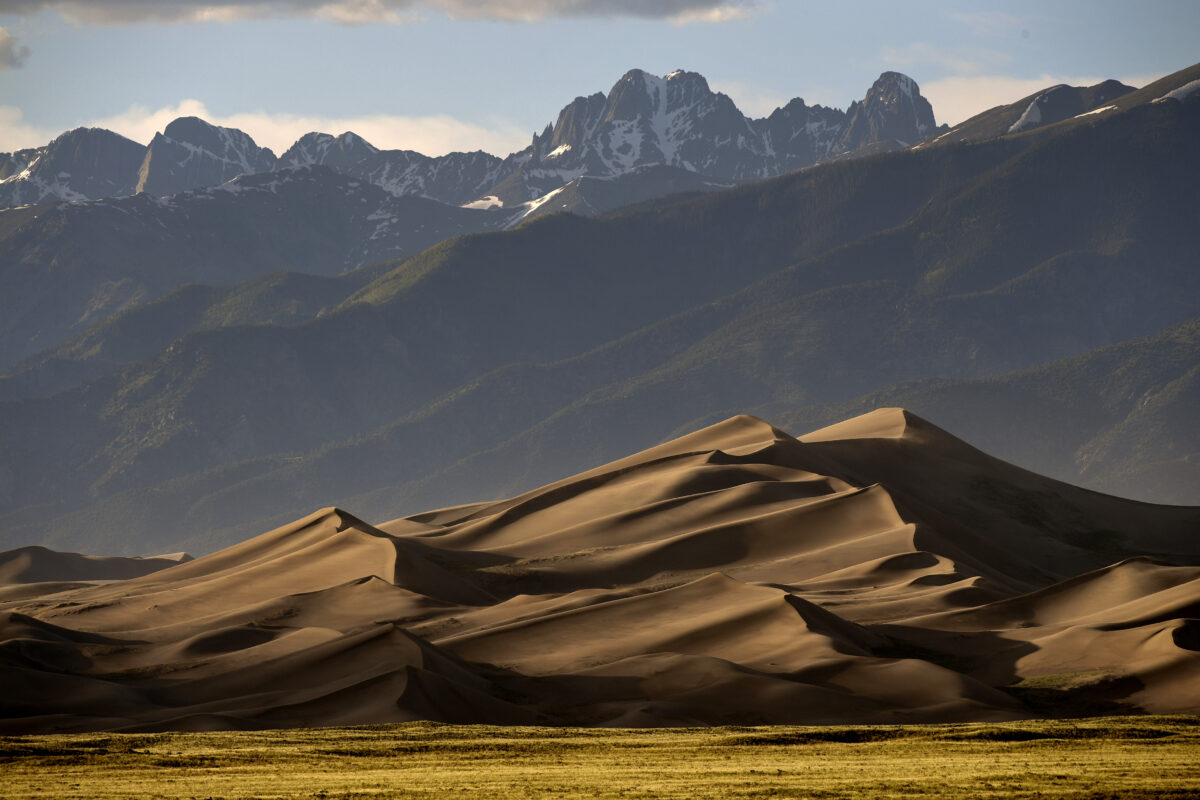 The Great Sand Dunes are lit by the setting sun on June 19, 2019 in Mosca, Colorado. Great Sand Dunes National Park and Preserve is known for huge dunes like the towering Star Dune, and for the seasonal Medano Creek and beach created at the base of the dunes. These sand dunes are the tallest dunes in North America. (Helen H. Richardson/The Denver Post/TNS)
Travel

No doubt you’ve heard the phrase, “Colorado Above All.” That’s because we were the highest state in elevation long before cannabis was legalized.

And while we’re not the coldest state, we are the coolest, right?

While pondering our highness and coolness, we thought it would be fun to compile a list of Colorado extremes—highest, deepest, darkest, coldest, you get the idea.

We have to start with the fact that Colorado has the highest mean elevation in the United States at 6,860 feet above sea level. Neighboring states round out the top four, with Wyoming at 6,396 feet, Utah at 6,011, and New Mexico at 5,771.

Here are some other extremes worth pondering. Some are even worth visiting.

The summit of Mount Elbert, 10 miles southwest of Leadville in the Sawatch Range, stands 14,440 feet above sea level. It is the second-highest peak in the contiguous Lower 48 states, a mere 65 feet below California’s Mount Whitney (14,505 feet). Elbert is typically climbed via its northeast ridge, its east ridge, or its southeast ridge with ascents of 4,700 to 4,900 feet. The summit looms 5,300 feet above the Arkansas River, which meanders seven miles to the east. The views from the summit—particularly of Mount Massive immediately to the north and La Plata Peak immediately to the south, both of which are fourteeners—befit the highest of all Rocky Mountains. In fact, climbers are apt to conclude that both of them are far more picturesque than Elbert.

The point in Yuma County where the Arikaree River flows into Kansas is 3,317 feet above sea level. We’ll do the math for you. That’s 11,123 feet (2.1 miles) lower than the summit of Elbert. We haven’t been there and don’t plan to go. If you have, let us know what we’re missing.

According to a National Park Service fact sheet, the Black Canyon of the Gunnison is the deepest canyon in Colorado and the third-deepest in the United States at 2,722 feet. The deepest is Hells Canyon in Idaho and Oregon (8,043 feet), and the second-deepest is the Grand Canyon (6,000). While the Royal Gorge of the Arkansas River near Cañon City doesn’t quite rank with the others in terms of depth (1,053 feet), it is a tourist attraction that can be experienced by raft or train (the Royal Gorge Route Railroad). It also can be viewed from above via the Royal Gorge Bridge, a suspension bridge that is the highest in the United States at 956 feet.

Great Sand Dunes National Park and Preserve in south central Colorado and Dinosaur National Monument in the northwest corner of the state are about as quiet as quiet gets. “When you’re talking about sound, we tend to talk about natural sound and human-generated sound,” said George Wittemyer, a professor in the department of fish, wildlife and conservation biology at Colorado State University who studies a field called sensory ecology. “I believe Great Sand Dunes hits the quietest spot in Colorado because it’s pretty isolated, so low human activity, but it’s also quite quiet biologically.” Dinosaur National Monument is home to the confluence of the Green and Yampa rivers, Wittemyer noted, so “there is a bit more (natural) noise than the Great Sand Dunes. It’s still an extremely quiet place.”

Colorado is home to 10 places designated as International Dark Sky Parks by the International Dark-Sky Association, which is based in Tucson, Arizona. Among them are three of the state’s national parks (Great Sand Dunes, Black Canyon of the Gunnison, and Mesa Verde): Dinosaur National Monument, Florissant Fossil Beds National Monument, and Jackson Lake State Park near Fort Morgan. Because they are so remote, Great Sand Dunes and Dinosaur are probably best for dark-sky stargazing. “I think those are the two quietest and darkest places in the state,” Wittemyer said. Kurt Fristrup, another CSU researcher and former National Park Service scientist, had more to offer. “I support George’s choice of Dinosaur National Monument, though the nearby Irish Canyon might be a bit darker,” Fristrup said. “At the other corner of the state, southern portions of the Comanche National Grassland near the Oklahoma-Texas border present equally dark skies.”

As measured by mean annual temperature, the community of Gateway in western Colorado is the warmest place in Colorado with an annual average of 56.1 degrees. Gateway is located 55 miles southwest of Grand Junction and four miles east of the Utah border. The hottest temperature ever recorded in Colorado occurred at the John Martin Dam on the Arkansas River, which creates a reservoir in southeastern Colorado. On July 20, 2019, the temperature there reached 115 degrees.

Maybe you’ll never have reason to visit Gateway, but chances are good you’ve been to the place that boasts the coldest mean annual temperature in the state. That is Climax at the summit of Fremont Pass (11,320 feet) on the Continental Divide, which has an annual average of 32.2 degrees. Fremont Pass is on the road between Copper Mountain and Leadville, and Climax used to be a mining village serving the Climax molybdenum mine at the pass. It’s a ghost town now, but the town did produce an Olympic skier, Dave Gorsuch, who competed in the 1960 Winter Games. The coldest temperature ever recorded in Colorado occurred at Maybell, a town in northwest Colorado on U.S. Route 40 between Craig and Dinosaur. On Feb. 1, 1985, the temperature there hit 61 degrees below zero.

Since we’re in July, which ranks as Colorado’s hottest month, we thought it would be cool to include which ski areas get the most snow. Topping the average annual snowfall list is Wolf Creek at 430 inches annually—that’s 35 feet, by the way—followed by Loveland (422) and Silverton (400). The biggest snowfall in Colorado history occurred at Silver Lake, in the mountains between Boulder and Fraser. On April 14 to 15, 1921, 75.8 inches fell in a 24-hour period.