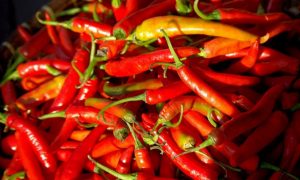 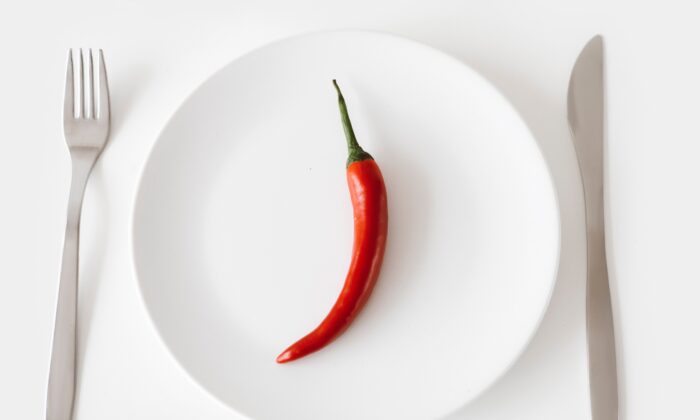 These feisty fruits are often thought to be vegetables and their famed heat comes some surprising medicinal benefits. (Anna Nekrashevich/Pexels )
Mind & Body

Chili peppers are berry fruits of the Solanaceae (nightshade) family. They have been a staple of Mexican cuisine for hundreds of years. The Columbian Exchange of the late-16th century—the widespread transportation of people, plants, animals, and cultural influences between the Americas, Old World, and Eastern and Western hemispheres—brought chili peppers to the world. These days, chili peppers are popular in dishes from India, many southeast Asian, Middle-Eastern, and African countries, the Americas, Caribbean Islands, China, and South Korea.

Chili pepper farming can be an arduous task since they are rather finicky to grow and harvest. Chili peppers are highly perishable and must be closely monitored during their harvesting, transportation, and storage phases. They also have to be harvested at just the right time—lest they spoil in their nursery beds or fields.

After chili peppers have been harvested, they can be eaten raw, dried, or cooked, and added to any number of recipes that call for a little zing (or a lot, in my case). The spicy heat that chili peppers are known for is due to a compound known as capsaicin. Not only does the mouth-watering kick that chili peppers deliver taste good, but peppers are also used for medicinal purposes.

Here are some of the healthful benefits of chili peppers.

Unbeknownst to many folks, chili peppers can help to prevent stomach ulcers from developing. That’s because once they’re ingested, they go right to work and eliminate any ulcer-causing H. pylori bacteria in your system. This process triggers your stomach’s cell lining to produce juices that bolster its defenses, thereby preventing ulcer lesions from forming in the first place.

Researchers at the University of Vermont have found that eating chili peppers was associated with a 13 percent reduction in overall mortality—in other words, people who ate them lived longer. That was primarily due to a reduction in heart disease and stroke.

Ever wonder why chili peppers have a beautifully luscious red coloration? That bright red color is due to their high vitamin A and vitamin C content. Two teaspoons of red chili peppers can provide you with 6 percent of the recommended daily amount of vitamin C. Meanwhile, all of the vitamin A contained in chili peppers is great for maintaining a vigorous gastrointestinal tract, respiratory tract, and urinary tract. Vitamin A also functions as a first line of defense against infection.

Chili peppers don’t just add some fire to your meals, they also accelerate your body’s thermogenic processes (your body’s generation of heat), and thereby increase your metabolic rate. Energy is required for these processes, which in turn burns calories.

Chili peppers can also manipulate the proteins in your body that ward off the build-up of bodily fat.

The capsaicin within chili peppers contains anti-inflammatory and anti-oxidant properties that may fight cancer. This is also good news for men because the bioactive phytochemicals in capsaicin chili peppers can prevent the growth of prostate cancer cells. According to a National Library of Medicine study, these dietary phytochemicals spur anticancer activity and can stop cancer from developing in the first place.