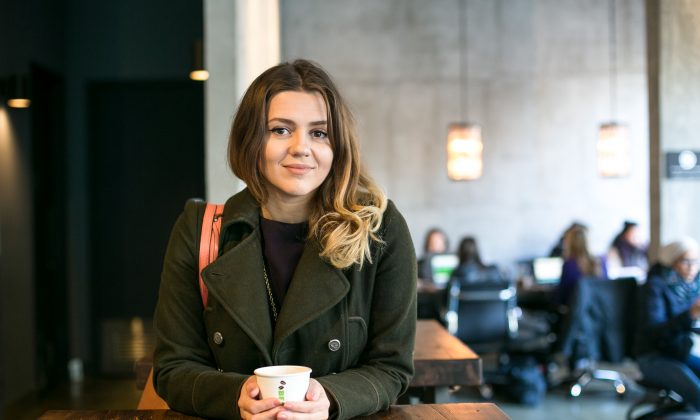 NEW YORK—She saw him every day in front of her D.C. apartment building as she left for work. He was a middle-aged, mentally ill black man who sometimes recognized her, sometimes not, but he was always there.

Every time Helena Bala, a 27-year-old former lobbyist turned full-time listener, walked past Joe, a voice inside told her that she wasn’t doing what she was supposed to be doing, that she was not listening to her own heart.

She started out giving him ginger ale (which he loved), or a bag of chips, then a loaf of Wonder bread, something she knew would last him for a while.

“He was always there, cold weather too, always standing, always with a cup,” said Bala, about the man she would come to identify as the symbol of her inner voice.

She had been living a lie since graduating from law school, taking a job she didn’t like just so she could pay her bills. But inside, she was aching to help people like Joe, people who were struggling and didn’t have anyone to talk to. The voice echoed in her head until one day she decided she would do it. She would listen to people tell their stories, with no strings attached.

As a child growing up first in communist Albania and then as an immigrant in Bridgeport, Connecticut, Bala knows how it feels to live without.

She recalls one time when she was 5 years old in Albania, waiting in a long line for hours to purchase milk, eggs, cheese, and flour, so they could make traditional New Year’s baklava. But when they got to the front of the line, the food rations had run out. “My mom and I went home empty-handed … nothing to make for the New Year,” she said.

When she was 11, her parents moved the family to America to give her a better life.

In America, their first apartment was in a bad neighborhood. The building was old and roach-infested, and only about 400 square feet in size, as far as she could remember. “It was the most disgusting thing,” she recalled. She slept on a futon in the living room until she went to college.

School was very important and Bala’s parents reminded her that they had fled Albania so she could go to school and “make something of herself.” The pressure was unbelievable, she said.

“Helena, work hard, study hard. You’ll be successful, you’ll be happy, you’ll have the things we didn’t have,” she recalls her parents telling her. And so she went to law school, one of the three professions immigrant parents want their children to go into, she said.

Her passion had always been to be a human rights lawyer and help people who desperately needed her support but this kind of work doesn’t pay the bills, so after graduating from George Washington University Law School in 2013, she became a lobbyist working 80-hours a week in Washington, D.C.

To a certain extent, her lobbyist job allowed her to advocate for civil and human rights, but her work was done for wealthy clients who wanted policy changes in their favor and did not fulfill her desire to help those who were downtrodden.

But she wanted to keep her parents happy. She sent them an allowance every month from her $50,000-a-year salary, which may have helped to convince them that she had achieved the American Dream. So despite not being happy herself, she kept going to work everyday.

All day she put on a happy face, but inside she felt broken and alone with no one to talk to.

All day she put on a happy face, but inside she felt broken and alone with no one to talk to. She loved living in the city, but D.C. is a place where power and success are at the forefront, and in order to make it there, “You have to be a certain person, and … you leave your issues at the door,” she said.

In Bala’s mind there is a duplicity between how we are in public and what we feel internally. “Sometimes they’re a diametrically opposed way of being,” she said.

She wondered how receptive her colleagues would be if they really knew who she was. “Would they still like me?” she asked.

The duplicity was taking a toll on her.

Listening to Her Inner Voice

In addition to her inner struggles with living a dual life, Bala was coming to grips with the financial strain of trying to pay all of her bills. Not only was she sending her parents monthly stipends, she had school loans, rent, and her own needs to take care of. Her bank account was becoming more strained, and she was living paycheck to paycheck.

She began giving to Joe less and less frequently, until one day he asked, “Are you upset with me?” His disappointment tugged something deep in her heart, and the only thing she could do was offer to talk to him.

She stood with him and asked questions that she had been wondering about for a while but never had taken the time to stop and ask him.

He told her he had been living on the streets off and on for more than 10 years, sometimes sleeping under awnings or windows with deep sills. He showered at the shelter when there was space for him; otherwise he washed up in public bathrooms. He has a sister, but he doesn’t talk to her. He was getting only about $10 to $20 a day from passersby.

As he talked, Bala was aware of people walking by in droves, not even looking at him.

“After having heard what he went through … that got to me,” she said.

She thought there must be other people out there who have a lot they need to say but don’t have a person to listen to them.

“He just seemed so thankful, so grateful to just have had that opportunity to say his piece, to be treated like a normal human being,” she said

After listening to Joe, it became more difficult for her to walk to work every day. When she saw him, her thoughts kept ringing with “I’m unhappy, I’m not doing what I want to do, I’m not helping people.”

These thoughts were persistent, she said.

Bala decided to post an ad on Craigslist, offering to listen to people. She wasn’t intending to solve anyone’s problems or be a therapist. The idea was just to listen without judgment.

So Bala decided to post an ad on Craigslist, offering to listen to people. She wasn’t intending to solve anyone’s problems or be a therapist. The idea was just to listen without judgment.

“I wanted to draw back that curtain. … With me, you can say whatever you need to say, and you’ll never see me again. It’ll be completely anonymous,'” she said. She posted the first ad in June 2014.

Despite her good intentions, Bala didn’t expect to get much response, but then her inbox started overflowing.

For the next three months, she tried to fit her listening sessions in around her busy work schedule—meeting anonymous talkers in coffee shops and taking phone calls.

In Sept. 2014, Bala quit her lobbyist job and started listening to people’s stories full time. She listened to as many stories as she could, seven days a week. “I wasn’t turning anyone down,” she said.

Over the next 14 months, she received thousands of responses from people of all walks of life—and the issues ran the gamut from alcoholism to marital problems and identity issues.

People tell her their deepest, darkest secrets. Things they don’t tell anyone else.

For example, one woman, Janine, told Bala about the very first time she learned how to force herself to throw up after a meal. She was only 16 when she started feeling her weight was becoming unmanageable. She also realized that she wasn’t as cool and popular as the rest of the girls.

Despite losing weight after working out at the gym and running, she couldn’t maintain her diet, so she got fat again. The boys didn’t look at her anymore. She felt ugly. Janine quickly learned that putting two fingers down her throat in just the right place would easily cause her meal to come floating up, but she feared her parents would find out.

Meanwhile, Bala was keeping her own secret from her parents—she had quit her job. She deferred her school loans, got a credit card, and was sharing housing expenses with her future husband. But this past summer, they got married and moved to New York City, so she told her parents this was why she left her job.

Since she started listening full time, Bala has discovered that it takes quite an emotional toll. Through the process, she learned to limit herself to only one listening session per day. Sometimes the stories she hears make her want to cry, but she tries not to. Every once in a while, she breaks down afterward when she talks to her husband.

Listening sessions take at least an hour, many take two to three hours. The longest one she’s had lasted four and a half hours. For all of them, she just listens. Even if it is a topic she has heard hundreds of times, she will still listen to it—for free.

Bala makes it clear at the outset that she is not medically trained, so if you ask for advice, you will get only the opinion of a “friend,” somebody who has heard many other stories similar to yours, she said.

Bala takes notes when she gets permission from the other person, partly because she wants to stay involved and remember the story. She also said she wants to publish her notes into a book.

Everything is circular, she said. It all leads back to Joe—her inspiration. Bala wants to donate some of the proceeds from her book to a few homeless shelters in D.C. “I think that long-term financial support would be so much better than just getting one person something,” she said.

She doesn’t know whether or not her listening will solve the double-identity crisis or even if it is the best solution, but it’s a service she’s willing to offer for as long as it takes.

“I think it’s helpful for them, and as long as I find that that’s the case, I’m going to keep doing it,” she said.

Helena Bala can be reached at TheBookOfSadness@gmail.com