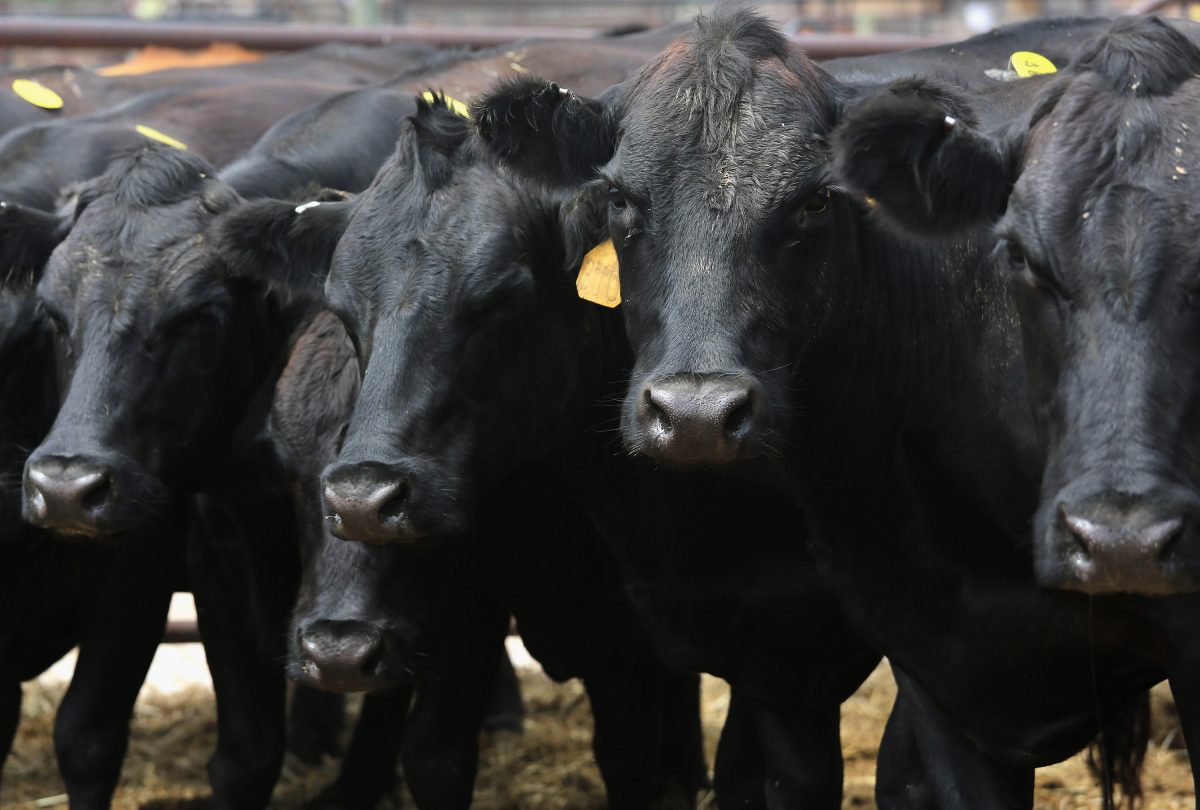 In 2011, scientists at the China Agricultural University introduced human genes into dairy cows to produce milk closer in composition to that of humans. The goal was to have milk from GMO cows sold in supermarkets and positioned as an alternative to formula and human breast milk for babies. (Scott Olson/Getty Images)
Nutrition

A quiet effort is underway to maximize profits by manipulating the genes of food animals
BY Martha Rosenberg TIMEJune 30, 2022 PRINT

The health conscious and safe food advocates are well aware of genetically modified organisms (GMO) such as the corn that Monsanto designed to withstand heavier exposures to its juggernaut herbicide Roundup.

Less publicized, however, are GMO food animals. Judging from ongoing research, the companies making these creatures hope they will increasingly find their way onto Americans’ plates in the years ahead. The AquAdvantage salmon was approved by the U.S. Food and Drug Administration (FDA) in 2015, but other GMO animals are under development.

The AquAdvantage salmon was created by inserting the coding sequence from a Chinook salmon growth-hormone gene under the control of an “antifreeze protein promoter and terminator” from the eel-like ocean pout into wild Atlantic salmon.

Designed to grow twice as fast as normal salmon, it was the first GMO animal approved by the FDA. According to a food industry website, the Counter, the AquAdvantage salmon is sold in Canada, but more than 85 grocery chains, food service companies, restaurants, and seafood companies have pledged to boycott it for both food safety and environmental reasons.

In addition to concerns about the product itself, the safety of wild salmon populations is threatened by such GMO animals if they escape. (Think Jurassic Park.)

While both the FDA and the AquAdvantage (AAS) salmon’s creator, AquaBounty, claim the GMO salmon is safe to eat, the FDA briefing packet disseminated for 2010 hearings revealed such red flags as a higher incidence of “jaw erosion” and “focal inflammation” (infection) seen in the AAS salmon; no way to determine if greater allergy risks existed because of the excessive culling of “abnormal” AAS salmon; and a possible “increase in the level of IGF-1,” insulin-like growth factor-1, in the AAS salmon.

Moreover, FDA food scientists and outside experts who had been called in for the hearings noted unexplained discrepancies, omitted data, and overall substandard science presented by those promoting the AAS salmon.

In 2020, the FDA approved the second GMO animal, an “intentional genomic alteration” (IGA) in pigs. The lab-created animal, called a “GalSafe” pig, is designed to eliminate a substance found on the surface of pigs’ cells called “alpha-gal sugar” that could cause people with alpha-gal (AGS) syndrome to have an allergic reaction. AGS sensitizes someone to allergic reactions to beef, pork, and lamb usually after a tick bite. The GMO animal was created by removing the gene for alpha-1, 3-galactosyltransferase, which “attaches alpha-galactose sugars to cell surfaces,” Medpage Today reported.

GMO animals are already used in the laboratory. In the 1980s, transgenic mice were created by inserting human genes and a sheep with human genes was created in 1997. GMO animals are also used in medical and non-food applications. In 2009, the FDA approved an anti-clotting drug made from goats that had the human gene for antithrombin inserted and linked to their DNA.

In 2010, researchers created a GMO pig by adding mouse and E. coli phytase genes to its DNA, and the creature was approved in Canada. Dubbed the “Enviropig,” it was said to produce less phosphorus in its urine and feces and be less destructive to the environment but the pigs were killed in 2012 when funding ran out.

In addition to creating animals that are more environmentally friendly or that have better nutritional profiles for human consumption, in 2007, United Kingdom scientists at the Roslin Institute, near Edinburgh, announced that they had produced genetically modified chickens to lay eggs that contain cancer-fighting drugs according to the BBC.

“Some of the birds have been engineered to lay eggs that contain miR24, a type of antibody with potential for treating malignant melanoma, a form of skin cancer. Others produce human interferon b-1a, which can be used to stop viruses replicating in cells,” the news agency reported.

“Once you’ve made the transgenic birds, then it’s very easy; once you’ve got the gene in, then you can breed up hundreds of birds from one cockerel—because they can be bred with hundreds of hens and you can collect an egg a day and have hundreds of chicks in no time,” said Dr. Helen Sang, lead scientist on the project.

In 2011, scientists at the China Agricultural University introduced human genes into dairy cows to produce milk closer in composition to that of humans. They hoped the milk from GMO cows would be sold in supermarkets and positioned it as an alternative to formula and human breast milk for babies. Soon after, scientists in Argentina also created a cow with human genes to approximate human breast milk, and scientists from New Zealand added a mouse gene to a cow to produce allergy-free milk.

When the human/cow GMO animals were announced, Helen Wallace, executive director of the biotechnology monitoring group GeneWatch UK, told the Telegraph: “We have major concerns about this research to genetically modify cows with human genes.

“There are major welfare issues with genetically modified animals as you get high numbers of stillbirths.” Wallace also questioned whether the milk “could be harmful to some people” with no large clinical trials having been conducted.

Others question the morality of adding human characteristics to animals.

So far, the AquAdvantage salmon, the “GalSafe” pig, and the GMO goat have been FDA approved, and genetic engineering of food animals looks set to ramp up as meat producers seek to maximize profits and modify animals to crowded growing conditions, consumer appetites, and marketing possibilities.

“Genome editing has been found to be a valuable tool for lightening the hair and coat color to better adapt dairy cattle to rapidly changing climatic conditions,” Giuseppe Ambrosi, European Dairy Association president, told Dairy Global. “These are the findings by researchers from the AgResearch Centre in New Zealand. High-producing Holstein Friesian dairy cattle have a characteristic black and white coat, often with large proportions of black. Compared to a light coat color, black absorbs more solar radiation.”

Earlier this year, National Hog Farmer wrote that genetic engineering “has the potential to transform how we improve livestock with genetics … increasing agricultural productivity (more food for more people in our community and elsewhere). While the article hints that genetic engineering could cut down on antibiotic usage, many operations are already using vaccines to that end.

GMO dairy cattle have been developed to grow without horns by taking DNA from the genome of Red Angus cattle, which suppresses horn growth, and inserting it into the cells of a Holstein bull. Pigs resistant to porcine reproductive and respiratory syndrome (PRRS) have been genetically engineered and researchers have been trying to genetically engineer cows that are immune to the terminal, prion-caused disease known as “mad cow” after the worldwide outbreaks in the early 2000s.

While stopping disease is a worthy goal, many animal diseases—like the current avian influenza epidemic—are caused or worsened by crowding and unsanitary conditions.

The development of genetically engineered food animals will likely increase because the GMOs represent greater profits for big meat producers when they adjust animals to their bottom line rather than their practices to better suit animal welfare and human safety.

However, like GMO crops, many environmental and food groups distrust the products (sometimes called “Frankenfoods”) and raise legitimate questions about their safety, purpose, and who is driving the aggressive GMO agenda.

Moreover, the objections to GMO crops—tampering with nature for human advantage—are magnified when it comes to animals.

Creating new animals for a dedicated human use “is a mechanistic use of animals that seems to perpetuate the notion of their being merely tools for human use rather than sentient creatures,” the Humane Society of the United States says. That may be an understatement.