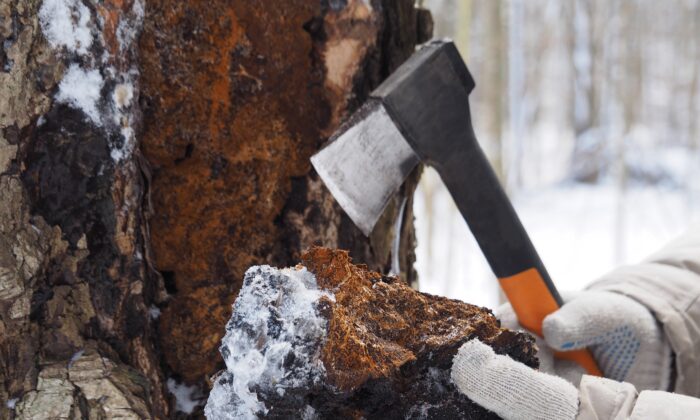 These parasitic mushrooms might kill their host tree, but they’re healthy for humans— and may be an effective treatment for cancer. (ElenVik/Shutterstock)
Mind & Body

The Birch Tree Fungus That Boosts Your Immune System

A bitter mushroom that acts as a parasite on birch trees is revered for its medicinal properties, including immunity boosting, antiviral, and anti-diabetes effects.

Chaga mushrooms aren’t the most attractive fungi on the block, and they’re not the tastiest either, but when it comes to medicinal value, chaga mushrooms are king. Typically consumed in tea form due to its bitter flavor, chaga (Inonotus obliquus) is a tree parasite that slowly decomposes tree trunks.

Most often found on birch trees, the black-brown fungus typically infects 30- to 50-year-old trees and may grow on their trunks for another 80 years, producing a conk—a growth that resembles rust-colored charcoal. Chaga mushrooms have been valued since ancient times, when Hippocrates used chaga infusions to wash wounds.

During the 12th century, chaga was valued for its anti-inflammatory, anti-parasitic, and gastrointestinal properties and was recommended for heart and liver diseases. Later, chaga became revered for its anti-cancer and anti-tumor effects, which are still being explored today, along with its potent antibacterial, antioxidant, immune stimulant, and antiviral functions.

Even if you’re not a fan of mushrooms, you can reap the benefits of this medicinal wonder by adding chaga powder to your tea or coffee or by mixing it into a smoothie. Chaga is also available in extract and supplement form, providing an impressive array of health benefits. GreenMedInfo.com has compiled 71 diseases that chaga may influence along with 63 of the mushroom’s pharmacological actions.

Polysaccharides (a type of carbohydrate) in chaga mushrooms have broad biological activity, including anti-cancer, anti-inflammatory, antiviral, and antioxidant effects, as well as being immunomodulatory. Chaga mushrooms may modulate immune response by helping to regulate the secretion of Th1 and Th2 cytokines in immune cells, as well as antibody production.

Chaga’s water-soluble polysaccharide ISP2a, in particular, has been found to enhance the immune response of mice with tumors, while also enhancing white blood cell proliferation and increasing the production of tumor necrosis factor, a powerful anti-inflammatory agent. It’s believed that ISP2a may act as a natural antitumor substance with immunomodulatory activity.

Chaga has powerful antiviral activity and was found to suppress the infectivity of pandemic influenza virus in mice and was comparable to the antiviral drug Tamiflu. It’s also effective against multiple feline viruses and the human viruses herpes simplex virus 1, HIV type 1, and hepatitis C.

In one study, at the highest concentration, chaga extract completely stopped or significantly inhibited the reproduction of the hepatitis C virus.

“The presented studies confirm the antiviral effect of I. obliquus and indicate its potential use in the treatment of diseases associated with viral infections,” the study reads.

It’s due to chaga’s potent immunomodulatory effects that it shows promise as a cancer fighter. Due to its antitumor and immunologic effects, many people with cancer use chaga mushrooms as a complementary therapy, and its extract is known to induce autophagy, which is your body’s way of clearing out damaged cells and making room for new ones.

Chaga extracts have been found to inhibit proliferation of or are cytotoxic to human gastrointestinal tumor cell lines, as well as human breast, lung, colon, myeloid leukemia, and cervical cancer cell lines.

While decreasing tumor cell proliferation and motility, chaga produces no or low toxicity to normal cells, and in a study on mice, continuous intake of chaga extract suppressed cancer progression by reducing tumors by 60 percent. In metastatic mice, it reduced nodules by 25 percent compared to the control group.

In another study, which found that extracts of chaga mushroom and bamboo leaf had strong antitumor activity, it was suggested that its anticancer effects may be the result of activation of innate immunity.

Chaga polysaccharides have notable anti-diabetic effects, with animal studies finding that they can reduce fasting blood glucose levels, improve glucose tolerance, and ameliorate insulin resistance. In one study, chaga extract at a dose of 250 milligrams (mg) per kilogram (kg) of body weight in mice had “obvious antidiabetes effects,” while a dose of 500 mg per kg “was the same as that of [diabetes drug] metformin.”

Is Chaga Suitable as a Daily Tonic?

There’s some debate over whether chaga mushrooms should be used as a daily tonic or reserved for specific health conditions. Anecdotal reports of improved digestion and mental calm have been reported from using chaga and other mushrooms daily, while some herbalists have suggested that it’s best used as an adjunct therapy when required.

There’s also concern that this medicinal treasure could be overharvested, as it only reproduces after the death of the host tree. Harvesting chaga conks prior to this time may threaten its ability to reproduce. In Alaska, a lax limit of 10,000 pounds of chaga and other conks per person per year exists, but it’s reportedly being exploited.

At this time, however, The Global Fungal Red List classifies chaga as a fungus of “least concern,” meaning it’s still abundant in many areas with no evidence of decline.

*WARNING: Always consult a medical herbalist or your health care practitioner when using both natural and pharmaceutical medicines for any diagnosed condition. This article is for informational purposes only and not intended to be used as medical advice.