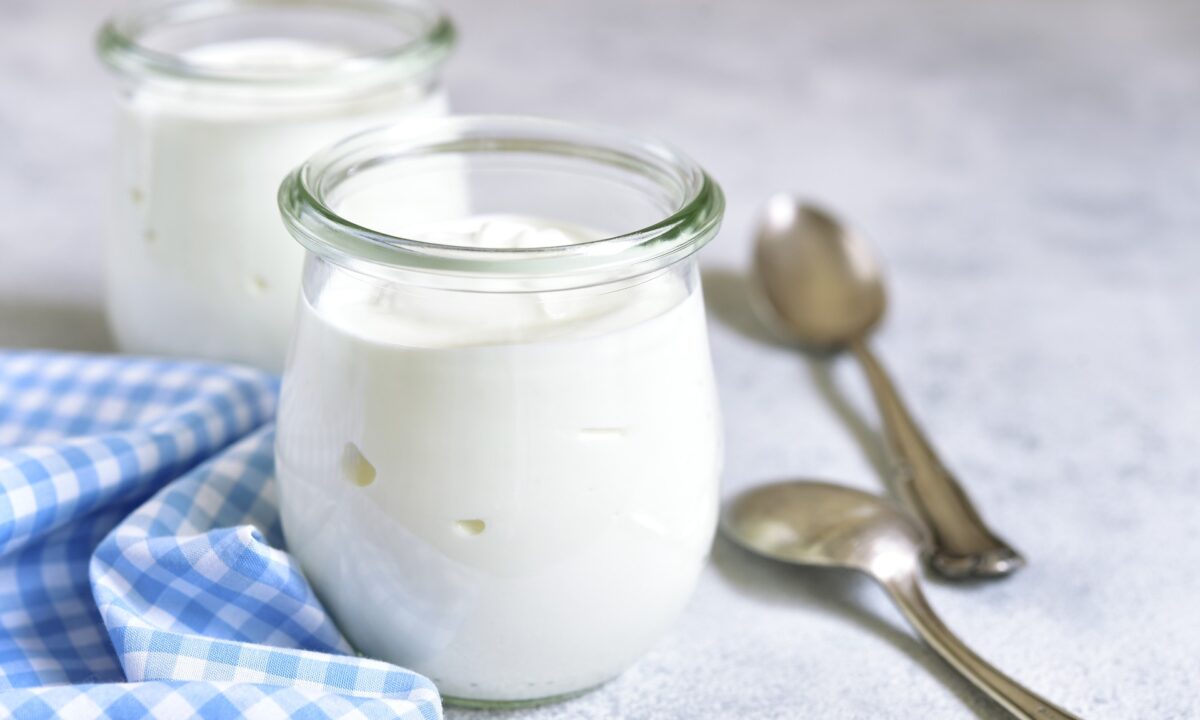 All you need for homemade yogurt is milk, a pot, and a spoonful of plain, unsweetened yogurt. (Liliya Kandrashevich/Shutterstock)
Weight Loss

The Best Way to Consume Yogurt to Achieve Weight Loss

Yogurt is a dairy product made from fermented milk. It’s not only beneficial to intestinal health, but also useful for weight loss. Which kind of yogurt is the best for weight loss? When to eat it and with which kind of food, to achieve the best results?

Dr. Ting Chief Tsai, probiotic expert and chair professor at National Yang Ming Chiao Tung University, pointed out that eating yogurt can help lose weight, because there are two kinds of nutrients inside it.

In a cup of yogurt, there are about 10 billion to 20 billion probiotics. When these good bacteria enter the stomach and intestines, they are conducive to the balance of intestinal bacteria.

Yogurt is rich in protein, which helps one feel fuller.

The University of Missouri conducted a study to see if yogurt as a snack could increase satiety, help control appetite, and reduce subsequent food intake.

The researchers asked the subjects to eat snacks of the same calories, including high-protein yogurt, high-fat biscuits, and high-fat chocolate. The results showed that compared to the people that ate high-fat snacks, the yogurt eaters were significantly less hungry, less likely to get hungry again, and ate 100 fewer calories for dinner.

Which Type of Yogurt is Good for Weight Loss?

Commercially available yogurts can be divided into regular yogurt, Greek-style yogurt, and Greek yogurt. The difference between them lies in the amount of proteins.

Greek yogurt is the finished product after the milk has been fermented, centrifuged, and concentrated, and some of the whey has been removed. Therefore, Greek yogurt has a higher protein concentration, but also more calories, than regular yogurt.

According to Dr. Tsai, yogurt’s effect for weight loss comes from its good bacteria, so you can eat any kind of yogurt to lose weight. Greek yogurt has more high-quality protein and calories, so you have to pay attention to its intake.

The type of bacteria added to yogurt also determines its effectiveness of weight loss.

Some countries, especially Japan, will determine whether a yogurt product or yogurt drink is a probiotic product or a non-probiotic one according to the strains of bacteria contained in the product. A good functional strain of bacteria is more effective in reducing inflammation in the body, and the product’s effect for weight loss is naturally better than average.

The bacteria that people usually use to ferment milk are Streptococcus thermophilus and Lactobacillus bulgaricus. These two bacteria can be used to make high-quality yogurt and yogurt drinks.

According to Dr. Tsai, other additional strains of bacteria are functional bacteria. Some strains have been studied and confirmed to have significant benefits for weight loss.

According to a review published in Nutrients in October 2021, strains of Lactobacillus and Bifidobacterium showed the best results in weight loss.

In addition, in terms of yogurt flavors, there are original, different flavored (e.g. strawberry) and sugar-free options available. Dr. Tsai does not recommend flavored yogurts with added sugar. Instead, he says, not to reject “original flavor” yogurt, and don’t fall for the “sugar-free trap” either. Yogurts that claim to be sugar-free can instead have added sugar substitutes (artificial sweeteners), which can have more negative health effects than sugar.

When Is the Best Time to Eat Yogurt, and With Which Food?

After choosing a type of yogurt, how do you eat it to make it more conducive to weight loss?

According to Dr. Tsai, having yogurt in the morning is the easiest way to make yogurt part of your daily diet. Yogurt can be part of the breakfast, with some eggs, chicken breast, and other foods rich in high-quality protein, as well as oatmeal, salads, nuts, fruits, and other prebiotic foods.

Improving the intestinal microbiome requires both probiotics and prebiotics.

Prebiotics are food for probiotics, and dietary fiber in plant-based foods is the bulk source of prebiotics. Since yogurt does not contain fiber, it is a good idea to add nuts and berries into it. However, this addition of nuts and berries to a yogurt breakfast is usually not much, so it is still necessary to eat some more fruits and vegetables throughout the day.

Yogurt can be consumed before or after a meal, but Dr. Tsai personally recommended eating it before a meal, because protein can bring a sense of satiety, while helping stabilize insulin.

He also reminded us that one to two cups of yogurt a day is enough, because the caloric content of yogurt is not low.

There is no difference in the nutritional composition of yogurt and yogurt drinks. It’s their methods of manufacturing that result in the difference between solid and liquid forms.

Since both yogurt and yogurt drinks need to be refrigerated, those who cannot drink cold liquids can heat them up slightly, but not above body temperature. You can microwave a cup of yogurt for 20 to 30 seconds, heat it by placing a container in hot water, or keep it at room temperature. However, after being heated, yogurt and yogurt drinks should be consumed immediately and should not be left uneaten for more than half an hour.