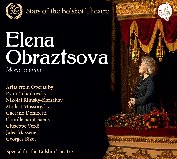 The Art of Elena Obraztsova

On Monday, January 12, 2015, the great Russian mezzo-soprano Elena Obraztsova died, at age 77, in a clinic in Germany. Coincidentally, the Melodiya label released a tribute album (distributed by Naxos) in its Stars of the Bolshoi Theatre series titled simply “Elena Obraztsova.”

Obraztsova was born in Leningrad in 1939 and survived the siege of that city during World War II. Her father was sent to the front, while she remained with her mother.

After she won several voice competitions, Obraztsova made her Bolshoi debut in 1963 as Marina in Mussorgsky’s “Boris Godunov.” Although still a student, she created a sensation and the following year went on tours in Japan and Italy, where she sang at La Scala opera house. She was immediately hailed as an international star and had a long career at the Bolshoi and the rest of the world.

The Soviets generally kept a tight rein on their artists but gave Obraztsova the freedom to go abroad. She, on the other hand, publicly complained that in her native country, she was limited to the same Russian roles and she wanted the opportunity to sing a more varied repertoire, which she was able to do in Europe and the United States. She had a bitter dispute with soprano Galina Vishnevskaya, who accused Obraztsova of denouncing her and her husband, cellist-conductor Mstislav Rostropovich, to the Soviet authorities when they were accused of protecting novelist Alexander Solzhenitsyn.

Her debut at the Metropolitan Opera took place in 1976 when she portrayed Amneris in Verdi’s “Aida.” In the opera, Aida wins the affection of the tenor, but in that performance, it was Obraztsova who thrilled the audience. Donal Henahan, the New York Times reviewer, raved about her and wrote that “the rest of the cast seemed mummified by contrast.”

She can be seen in two performances with Placido Domingo that were filmed (and are available on DVD or on YouTube), “Carmen” and “Cavalleria rusticana.” Both were directed by Franco Zeffirelli, who is quoted as saying, “In my life there were three shocks – Anna Magnani, Maria Callas and Elena Obraztsova.”

The “Stars of the Bolshoi” CD is a collection of Russian, Italian and French arias, recorded between 1965 and 1987 with the Bolshoi Theatre Orchestra under the baton of four different conductors: Boris Khaikin, Odyssey Dimitriadi, Algis Ziuraitis and Mark Ermler.

Excerpts from some of Obraztsova’s signature roles are included, such as Marina from “Boris Godunov,” Eboli from “Don Carlos,” Delilah from “Samson and Dalilah” and Carmen. The singer’s ability to dramatize each role is apparent from the opening track, Joan of Arc’s first act aria in which she bids farewell to her native hills and fields in Tchaikovsky’s “Maid of Orleans.” From the warrior saint, she switches to a jealous woman in Kascheyevna’s aria from the opera “Kashchey the Deathless” by Nikolai Rimsky-Korsakov. Then back to a religious figure again in Marfa’s Divination from Mussorgsky’s opera “Khovanshchina.”

She performs two arias from Tchaikovsky’s “The Queen of Spades,” one as a young woman (Pauline) and the other as the elderly Countess. Obraztsova portrays two gypsies: the vengeful Azucena in “Il Trovatore” and the flirtatious Carmen singing “Habanera.” She is overpoweringly seductive as Saint-Saens’ Delilah and hopelessly lovelorn as Charlotte in Massenet’s “Werther.”

This is not an album to listen to when you’re puttering about the apartment. Obraztsova is a force of nature, who commands attention, even on a recording. The comparison to Callas is apt, because Obraztsova goes for dramatic effect, sometimes using chest voice. If she doesn’t have the even production of tone of a singer like Elina Garanca, she projects more personality. Obraztsova’s vocal gift is undiminished over the 20 year period covered by the CD.

The sound is acceptable, albeit not up to western engineering standards and the booklet contains a short biography of the singer but no translations or even summaries of the pieces. While American opera lovers are probably familiar with the Italian and French operas as well as the Tchaikovsky and Mussorgsky operas, the Rimsky-Korsakov works are fairly obscure in this country.

Although this CD was released shortly before Obraztsova’s death, it is a proper testament to her artistry.