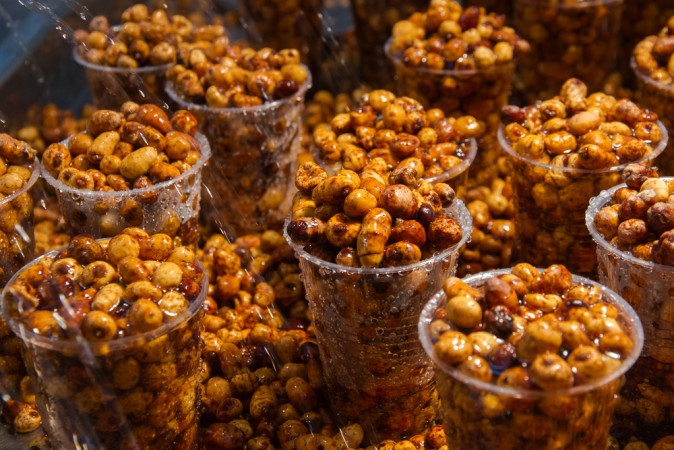 The Alternative for People with Nut Allergies: Tiger Nuts

If you or your children suffer from nut allergies, there is an alternative that has the nutritional qualities of nuts without the allergy problems. They are called tiger nuts or chufa. They are actually not nuts but small tubers that grow in the ground. Discovered about 4,000 years ago, tiger nuts come from North Africa and are part of the daily diet for people in North Africa and Spain. In North Africa, people eat them in their natural form, while in Spain tiger nuts are made into a milk called “horchata de chufa.” A 2002 study on patients suffering from multiple food allergies noted that tiger nut allergy “has rarely been reported” despite the fact that tiger nuts and tiger nut milk are widely consumed in some areas.

According to TigerNuts.com, tiger nuts contain a powerful energy compound as well as nutrients. They are high in fiber, proteins and natural sugars. Tiger nuts also have a high content of oleic acid, certain minerals (phosphorous, potassium, calcium, magnesium and iron) and vitamins (B1, E, and C). There are many claims about their health benefits. This summer, the Nigerian news media reported the health claims of tiger nuts by a nutritionist at a Nigerian hospital. The nutritionist claimed that tiger nuts help prevent cardiovascular diseases, strokes and cancer.

There May be Something to the Claims by the Nigerian Nutritionist

A Nigerian study compared the nutritional qualities of tiger nut, coconut and soy milk. Researchers found that all three had similar protein content, while tiger nut and coconut milks had higher fat content than soy milk. Tiger nut milk had the highest levels of oleic acid. The study notes that tiger nut is “reported as very healthy and it helps in preventing heart attacks, thrombosis and activates blood circulation. It helps in preventing cancer, due to high content of soluble glucose.” The study also notes that tiger nuts have been found to help reduce the risk of colon cancer, and are “suitable for diabetic persons.”

What about the taste? The company Tiger Nuts USA which sells organic tiger nuts describes them as “sweet tasting.” Not bad for something that is not actually a nut, isn’t eaten by tigers, and can be safely eaten by those with nut allergies.

*Image of “Tiger nuts” via Shutterstock

Andrea Donsky
Follow
Andrea Donsky, who holds a bachelor of commerce, is an international TV health expert, best selling author, and founder of NaturallySavvy.com—a recipient of Healthline’s Best Healthy Living Blogs for 2019. This article was originally published on NaturallySavvy.com
SHARE
Friends Read FreeCopyFacebookTweet
You May Also Like