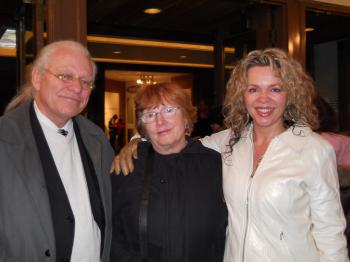 By Epoch Times Staff
Print
KITCHENER-WATERLOO, Canada—Ron Zboril saw Shen Yun Performing Arts with his family on Tuesday night. Mr. Zboril, a lawyer whose hobbies include historical re-enacting was especially delighted by one of the performances depicting an ancient dynasty in China.

“I thought the drill was terrific, the synchronization was spot on, I really enjoyed it,” said Mr. Zboril, praising the dance titled Recalling the Great Qin which features the Terracotta Army statues created over 2,000 years ago during the Qin Dynasty (221 – 206 B.C.).

Having seen the statues in China, he noted that they “came to life on stage” in the acclaimed Shen Yun classical Chinese dance and music production.

Mr. Zboril, who operates Ronald M. Zboril Law Offices based in Cambridge and Kitchener, has been practising law in the Waterloo region since 1979. He is also active in the community, enjoys gardening, and is an amateur historian with a particular interest in American Civil War and War of 1812 re-enacting.

Along with “the costumes, the whole introduction to the Chinese culture,” another piece that made the most impression on him was a dance that paid tribute to the plum blossom, a small, delicate flower that blooms even in snow and wind.

“For me, the plum blossom performance was fantastic. That stood out for me,” he said.

Mr. Zboril came to the show with his wife, Ursula, and his daughter, Tanya. Both had similar warm praise for Shen Yun.

“I thought it was wonderful. I enjoyed the dancing, very professional. The costumes were fantastic,” Mrs. Zboril said.

“The costumes and the dancing were exquisite. It was beautiful,” said Ms. Zboril.

New York-based Shen Yun Performing Arts was founded in 2006 with a mission to revive the true traditional cultural heritage of China, which has largely been destroyed under decades of communist rule.

The dance company each year creates an all-new program that not only celebrates the great myths and legends of ancient China, but also historical events unfolding in the modern day depicting similar timeless themes of courage, heroism, faith, and compassion.

Shen Yun will go on to Montreal for four shows from Jan. 7 to 9 and then Toronto for five shows from Jan. 13 to 16. For more information, visit ShenYunPerformingArts.org .