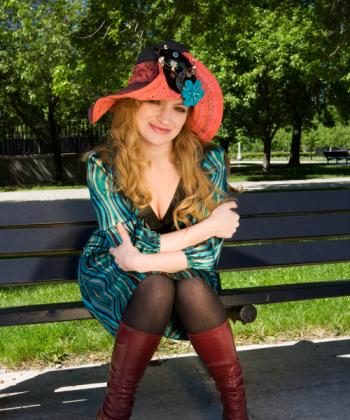 The enchanting Harmony France as Emma in a role she appears to have down pat in Tell Me on a Sunday. (Courtesy of Keep Me Alive Photography)
Arts & Culture

Theater Review: ‘Tell Me on a Sunday’

CHICAGO—When we hear "Andrew Lloyd Webber," we think Big Musical Theater—"Evita," "Joseph and the Amazing Technicolor Dreamcoat," "Cats," and of course "Phantom of the Opera." A one-man show just doesn’t come to mind, much less a one-woman show—but here it is!

Chicago’s Bailiwick Repertory Theatre is presenting "Tell Me on a Sunday," a rehash of a show called “Song and Dance.” This original musical had two acts, the first in song and the second act, the same story, retold in dance—an unusual premise and not as well received as Webber had anticipated.

The new version called "Tell Me on a Sunday" is a one-woman, one-act musical story of roughly 70 minutes that tells the story of Emma, a 30-something hat designer who has come to New York seeking love and success.

The story is told through by Webber’s music (with words by Don Black and Richard Maltby Jr.) in 20 songs and an overture. In some cases, you could almost swear you’re listening to actual songs from earlier Webber musicals and that he is plagiarizing his own material—the differences are so slight. Nonetheless, there are some lovely ballads and some powerful story-telling songs.

The entire story is told from Emma's perspective, through her voice and her experience. We learn of her heartbreaks, her triumphs, and of all that she discovers as she transforms from a young English lady to a New York woman. Harmony France ably shows her range in handling all of Mr. Webber's music.

The small Studio Theatre at Bailiwick works perfectly for this intimate show, and Director Elisa Woodruff truly understands the piece.

The score was written for at least five instruments, but musical director Joshua Stephen Cartes has brought to a new sound with just keyboard and drum, which also works well for this intimate space.

One small problem is the constant changing of clothes on stage, and it’s unclear at times just where Emma is heading on Joseph Tokarz’s multi-level set.

The hats on the stage (and as part of Emma’s costumes) are Agnes Miles’s creations, and they truly are art. The hats may be purchased after the show and are well worth close examination.

Alan Bresloff writes articles about theater in and around the Chicago area.