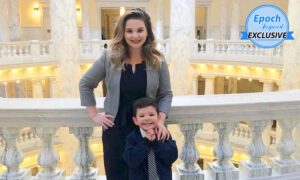 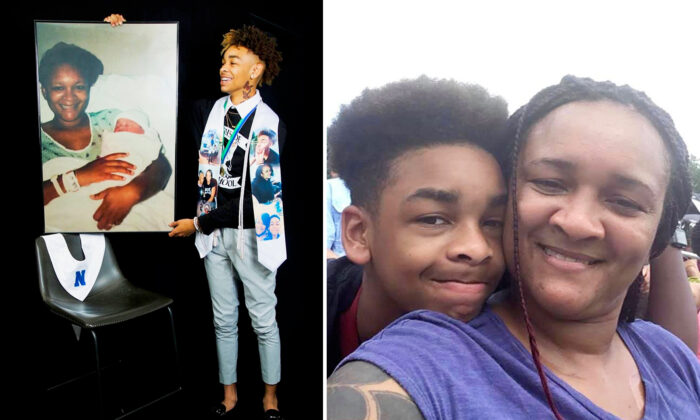 Teen Honors His Late Mom in Touching Graduation Photoshoot: ‘She Was My Best Friend’

A Georgia teen has honored his late mom in a special photo shoot after he graduated a year early from high school.

In late July as Kentavius “KJ” Morgan, 17, graduated from Northside High School in Warner Robins, he arranged a touching photoshoot where he donned a custom-made stole with pictures of his mother, Teresa Colbert, and him.

Some of the touching photos were taken alongside a large printout of his mother and him as a newborn.

Morgan, who has five siblings, lost his mother to cervical cancer on May 12, 2019—Mother’s Day.

“My mom was 45,” Morgan told The Epoch Times. “She was a single mother raising two boys after going through a traumatizing divorce.”

Morgan shared a great bond with his mother. In a touching post on Instagram where he details his academic achievements in the past year, he wrote: “She was my best friend. My hype man …  My everything.”

The teen remembers vividly that he and his mother had spoken about his graduation ceremony. “We always talked about how she was gonna be screaming and I was gonna be crying at graduation … here I am I walking the stage without my best friend,” he wrote.

After Morgan’s mother passed away, in order to channelize his grief, Morgan thrust himself into his studies.

“In this world, you can’t live life in grief. It’s too short,” he told The Epoch Times.

Listing his academic achievements on the Instagram post, Morgan revealed that, apart from attending school and graduating a year early, he completed all his freshman core classes for college. He will now go to college as a sophomore.

Through his dual enrollment program, Morgan earned 26 credits and is accepted into all three colleges that he wants to attend. He also achieved the highest average in dual enrollment in an algebra course.

Additionally, the determined teen, who was an honor society member, had a part-time job as a hair braider working on two heads each day and still maintaining work each Sunday.

Being a YouTuber and having already earned an Associate of  Early Childhood Education, Morgan says he dedicates all his accomplishments to his mother.

“My whole senior year was about my mom as I always spoke about,” he told The Epoch Times. “I told myself that she wasn’t coming back. When you pass, you pass alone. I now do everything in life for me.”

Witnessing his accomplishments, Morgan believes his mother would have been more excited than him if she was alive.

Morgan was always encouraged by his mother to work hard. He said she would always tell him to “be you and don’t let anyone change that.”

The teen, whose heartwarming post amassed over 11,000 reactions, believes “being strong is not always muscle-wise.”