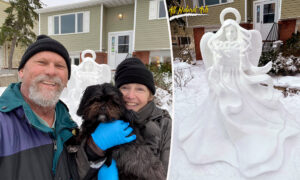 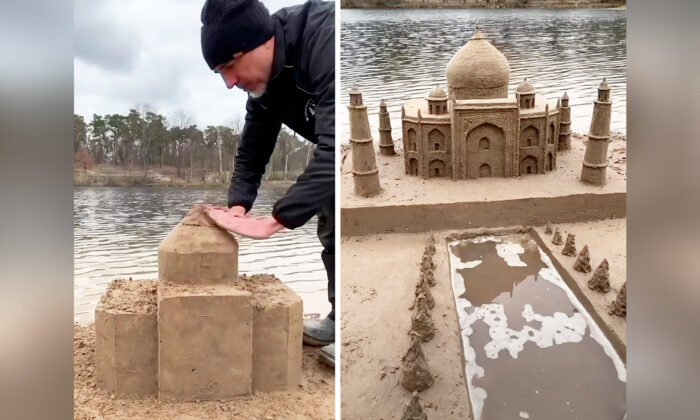 An Italian artist who spent his summers as a child building sandcastles at the seaside has turned his passion into a profession creating incredible sand sculptures around the world.

Leonardo Ugolini, 52, who hails from Forlì, a town in the northeastern part of Italy, and is currently a resident of Lithuania, discovered an entire universe that revolved around sand sculptures as he grew older.

“Curiosity led me to learn more about sand and it became a profession by chance,” Ugolini told The Epoch Times via email.

For the last 30 years, the talented artist, who doesn’t spend more than a month in each country, has been creating detailed sculptures around the world and admits that he is still learning new things each day.

Ugolini’s intricate and realistic sand sculptures are inspired by movies, everyday life, space, manga, and, architecture. Additionally, he also says that his memories from his childhood and the mix of curiosity have always helped him undertake new projects.

Over the past few years, Ugolini has created some marvelous sculptures, including Alladin and Gennie, Hogwarts from Harry Potter, and replicas of many other amazing architectures such as the Empire State Building in New York, the Eiffel Tower in Paris, and the Taj Mahal from India.

However, some of his personal favorites remain the sand sculpture of space, Jupiter, and other planets of the solar system that he made in Ashiya in Japan.

“I had enough time and space is a theme that truly fascinates me,” Ugolini said.

His second favorite remains a castle that he made in Vietnam.

“I had plenty of time to make it together with Enguerrand David, a sculptor friend of mine,” Ugolini added. “I was really happy with the result.”

In addition to all the breathtaking sculptures, Ugolini has also played a role in creating the world’s largest sandcastle in Blokhus, Denmark, which towered up to 21.16 meters (69.42 feet) high.

“At first, I was very doubtful about the result,” he said, adding that in such a type of project many different sculptors are involved and thus the result happens to become a “soup” of different styles. However, with the direction of Wilfred Stijger, Ugolini was very happy with the result.

“I’d say we were also very lucky,” Ugolini said. “If a castle of this size would’ve collapsed, it would’ve been very dangerous for the sculptors and helpers.”

However, due to the assistance from Karsten Nielsen, who directed the sand compaction works, the sculpture didn’t collapse.

Ugolini stresses the importance of the type of sand used in creating these stunning sculptures.

“The best sand is very fine, with a little bit of silt,” Ugolini said. “Normally, I love working with quarry sand, but river sand and beach sand can also be good. As long as it’s very fine.”

As for the time that goes into each piece, Ugolini says it all depends on the scope and size of each sculpture. However, on average, it ranges from anywhere between a few days and a month.

Despite winning many awards for sculpting in the last 30 years, and being a world champion of Sand Architecture in 1998, Ugolini says that sand sculpting contests don’t really excite him much and he instead prefers compelling projects where he can truly express himself.

“The comments, both offline and online, are super enthusiastic,” Ugolini said. “Some comments are truly touching and warm my heart.”

As for what the future holds, an ambitious Ugolini wants to create a sand sculpture theme park in America.

“I really want to give sculptors the opportunity to express themselves at their best and give them more time to create what they really want,” Ugolini said.