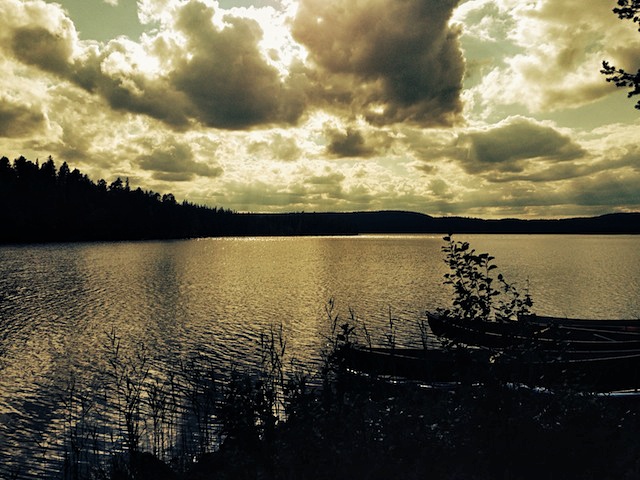 When you think of Lapland you probably think of cosy log cabins, eager huskies and reindeers driving sleighs through the snow, but Europe’s last wilderness – located not too far from the Arctic Circle – is actually worth visiting during the summer months too. Swedish Lapland is the heartland of the indigenous Sámi people and I was lucky enough to be invited there in July – a time when few tourists visit and when temperatures can actually reach a rather balmy 30 degrees. Okay there’s no Northern Lights to chase and photograph, but the sparsely populated area is still spectacular with scenery including seemingly endless pine forests, swollen rivers and tranquil lakeside villages.

We started our journey in Skelleftea, a small cosy town in Southern Swedish Lapland near the Baltic Sea, which is a very different experience in summer. Firstly you’ll experience the natural phenomenon of the midnight sun which means the notions of day and night are quickly forgotten and where the landscapes are bathed in a dim pink glow during the evening hours instead. The town is geared up towards making the most of the beautiful natural surroundings and there’s no shortage of activities on offer aimed at nature enthusiasts, outdoor adventure seekers and even stag do party members looking for a unique experience.

Next on the list was Svansele Wilderness Centre. It was an hour’s drive from Skelleftea and the perfect pit-stop to make the most of the unspoilt landscapes. On arrival we were greeted by the centre owner, Thorbjorn who handed us a cup of strong coffee that he had just brewed on an open fire. He was a colourful character who admitted he shunned traditional schooling for hunting and fishing and was now the proud owner of nine overnight camps which include traditional ‘lavvo tents’ and an en-suite hotel – all of which he built himself.

Activities at the centre in the summer include quad biking and cycling but Thorbjorn is most legendary for his moose-spotting guarantees – if you spend 24 hours with him and you don’t see a live moose he promises to refund your money. After an exhilarating spin on one of his powerful quad bikes, it all went a bit Game of Thrones when we indulged in a spot of axe throwing (yes really). After missing the board about 12 times I finally hit my target and then decided to retire gracefully!

The next day we ventured to Jokkmokk, a small village located just north of the Arctic Circle. Here we met Matti Holmgren and Stina Svensson who founded Jokkmokkguiderna – a Siberian Husky kennel which was home to around 45 huskies and two Border Collies. They offer dog sledding tours during the winter and in the summer, canoeing on the Pearl River Nature Reserve is their premier activity (which we were lucky enough to experience). I wouldn’t say it’s an easy task crossing the river on a canoe but it’s a refreshing and tranquil activity and perfect way to de-stress.

Having experienced the tranquil and traditional way of life of the Sami people first hand I strongly believe it’s a myth that Lapland is a lot better in the winter months – this beautiful and unsullied corner of Scandinavia makes a unique travel destination all year round.

Copyright © 2014 by Global Grasshopper. This article was written by Scott Balaam and originally published on globalgrasshopper.com.