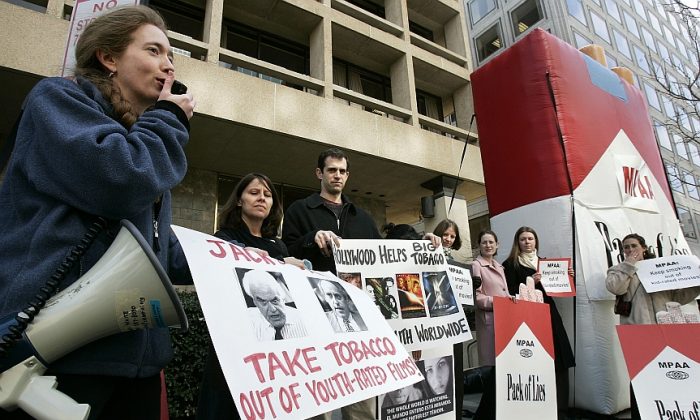 Demonstrators stand outside the office of the Motion Picture Association of America (MPAA) on Feb. 22, 2005 in a call to keep smoking imagery out of future film productions. (Photo by Alex Wong/Getty Images)
Health News

Hollywood has a long, intimate relationship with cigarettes, and at times the habit has been hard to break. Lawsuits and congressional hearings reveal that the tobacco industry had for decades fought hard to ensure that smoking remained onscreen.

“Anything that can be done to help reduce that imagery, to reduce that sense that smoking is a norm, is helpful,” Lushniak said at a White House conference.

According to the Surgeon General’s 2014 report on the dangers of tobacco use, smoking in movies has “a direct causal link” on young people taking up the habit.

One of the studies cited in the report comes from the Norris Cotton Cancer Center (NCCC) where researchers showed that adolescent smoking would be reduced by nearly 20 percent if smoking shown in PG-13-rated movies were eliminated.

According to the study’s author James Sargent, M.D., pediatrician, researcher, and co-director of Cancer Control Research Program at NCCC, the movie industry needs to address smoking as seriously as profanity.

“From my point of view there’s so much overemphasis on things like sex or skin, but if you actually think about it from a risk point of view, the behaviors that are depicted in movies that are of greatest risk to adolescents are the violence and the substance use,” said Sargent.

“Probably the best evidence of how movies affect behavior is movie smoking.”

According to Sargent, it’s a matter of maturity. As teens progress into young adults, they are less likely to respond to what they see. Before that, kids often imitate behavior without thinking.

“Midway through their teens, they are by no means an adult like you or me. They’re still somewhere between a two-year-old and a 25-year-old, and they’re just more apt to be influenced. They have less self-control over that influence,” he said.

Since 2003, a majority of state Attorneys General from across the country has urged major film studios to place more restrictions on smoking imagery. The Motion Picture Association of America (MPAA) responded that the industry is “firmly committed” to reducing smoking depictions “especially in motion pictures directed to a young audience.”

“These discussions have already resulted in tangible reductions of smoking and tobacco depictions, and we expect even more progress in the future,” wrote MPAA Chairman Dan Glickman in a 2007 letter.

However, instead of making the recommendations part of the formal rating system, movie houses have adopted internal administrative structures that require the director to justify a smoking scene. The Walt Disney Company, for example, enacted a policy in 2007 where smoking scenes get an R rating unless “smoking is part of the historical, biographical or cultural context” or “the negative consequences of smoking are emphasized.”

Health officials say film industry efforts have fallen short of their goal. A recent analysis of blockbusters finds that more than two-thirds of all smoking scenes are in PG-13-rated films.

Some suggest that there are problems with the ratings system that go beyond cigarettes. A study published in the December 2013 journal Pediatrics found that PG-13-rated movies are often more violent than R-rated films, and more often feature characters who glorify alcohol and sex.

According to MPAA spokesperson Kate Bedingfield, “The purpose of the rating system is to reflect the standards of American parents, not set them. The rating board tries to rate a film the way they believe a majority of American parents would rate it.”

“Societal standards change over time and the rating system is built to change with them,” Bedingfield told Philly.com.

Sargent said he understands why film makers are reluctant to give smoking scenes a mandatory R rating. Not only is the rating process a delicate art of negotiation and compromise that must keep balance between artistic integrity and standards of decency, but a more restrictive rating also means losing the young adolescent audience.

“We’re not saying you can’t put smoking in the movie, and we’re not saying that actors can’t smoke while they’re on screen. What we’re saying is that if you do that, the movie should be rated R so it’s harder for kids to watch,” Sargent said. “That’s the morally responsible thing to do.”