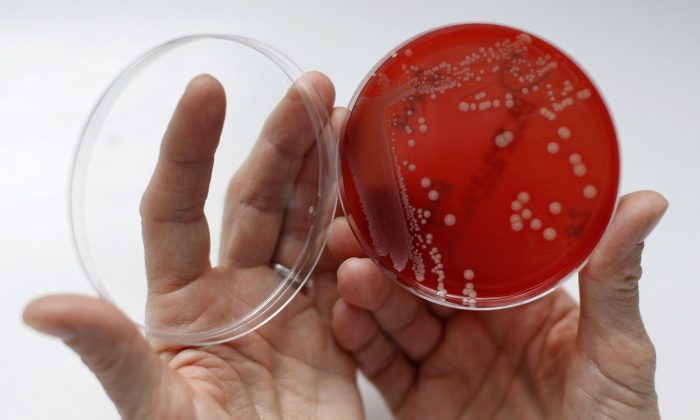 A strain of antibiotic-resistant bacteria discovered in pigs is spreading to people and causing infections, according to a new study released this week.

A strain of livestock-associated methicillin-resistant Staphylococcus aureus (LA-MRSA) is suspected to have emerged among European pigs and other livestock in the past several decades because of frequent antibiotic use in farming.

“Historically high levels of antibiotic use” may have led to the cause of this “highly antibiotic-resistant strain of MRSA on pig farms,” said Dr. Gemma Murrayn, who worked on the study released by the University of Cambridge, in a news release.

“We found that the antibiotic resistance in this livestock-associated MRSA is extremely stable—it has persisted over several decades, and also as the bacteria has spread across different livestock species,” Murrayn added in the news release.

The researchers say the bacteria—known as CC398—is a potential threat to public health. LA-MRSA causes infections similar to non-resistant Staphylococcus aureus but is harder to treat with antibiotics.

It’s the dominant MRSA in pigs and other European livestock. Researchers say it’s also associated with a growing number of infections among people, regardless of whether or not they had direct contact with livestock or not.

“Understanding the emergence and success of CC398 in European livestock—and its capacity to infect humans—is vitally important in managing the risk it poses to public health,” senior study author Lucy Weinert of the University of Cambridge said in the news release. “Cases of livestock-associated MRSA in humans are still only a small fraction of all MRSA cases in human populations, but the fact that they’re increasing is a worrying sign,” she added.

The National Institutes of Health’s Library of Medicine notes LA-MRSA first emerged in “the early 2000s,” saying that people with prolonged exposure to livestock can contract the bacterial infection. The World Health Organization lists the bacteria as one of the more significant global threats to human health because of the resistance it has to antibiotics.

MRSA doesn’t create symptoms among pigs even though it can be dangerous to people, researchers say. It generally causes relatively mild infections on the skin, including abscesses, sores, and boils.

A small number of studies have found that certain herbs and extracts, including some that are used in Chinese or ayurvedic medicine, may be able to disrupt LA-MSRA’s protective shield, known as its “biofilm.”